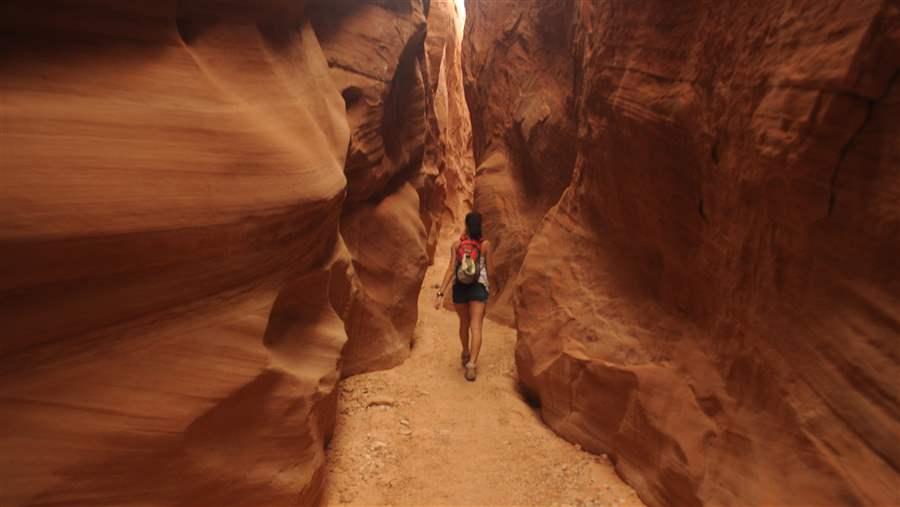 A slot canyon in the Escalante country, Utah’s Colorado Plateau.

When my oldest daughter was 2 months old, my wife and I backpacked her into southern Utah’s panoramic Escalante region. Years later, I led my wife, two daughters, and three other families down the state’s Labyrinth Canyon to experience the endless vistas and solitude that characterize our public lands. This trip became an indelible memory for each of the kids, who learned the value of quiet recreation—traversing the land on two feet instead of four wheels. As an American, I feel privileged that there are many amazing places where I can pursue these activities with my family and friends.

Many of these areas can be found on the 246 million acres overseen by the Bureau of Land Management (BLM), the agency responsible for shepherding the largest chunk of U.S. public land.

My first experiences exploring these landscapes happened in southeastern Arizona, across vast stretches of the Sonoran Desert that connected the Sky Island mountain ranges. The places I return to time and again, however, are the vast open sage steppe in my home state of Oregon and the colorful canyon country of southeastern Utah. Whether it’s trips down the Green or San Juan rivers—the latter of which contains some of the most dense concentrations of archeological resources in the country dating to the Anasazi period—or hiking trips in Cedar Mesa, this beautiful part of the United States draws me to it.

Like other visitors, I make stops in the gateway communities along my way to the rivers or canyons that are my final destination. Before embarking on a rafting trip down the San Juan, I spend some time in Monticello and Blanding, to pick up groceries and other supplies.

For a hike in the Escalante, I might visit Boulder for a meal or to get gas. Closer to home, Steens Mountain in southeastern Oregon’s Owyhee Canyonlands is a must-see, and the nearby towns of Burns and Frenchglen are a convenient stopover. Exploring these towns along the way—whether in Utah or Oregon or any of the other western states where BLM lands are found—is enriching for travelers and provides a significant benefit for the community.

A new study by the independent firm EcoNorthwest, commissioned by Pew, found that in 2014, there were more than 38 million visits to BLM lands in the west and Alaska by people enjoying quiet (nonmotorized) recreation such as hiking, camping, or hunting. And communities within 50 miles of these recreational areas, like Boulder and Blanding, benefited from these visits to the tune of $1.8 billion. Quiet Recreation on BLM-Managed Lands: Economic Contribution 2014 also shows that these visits supported 25,000 jobs and generated $2.8 billion for the U.S. economy overall. Earlier research has shown the impact of recreation and its associated spending on public lands, but this is the first study to examine only quiet recreation on BLM lands.

Ensuring that places for these types of recreation stay in their natural state is good for the bottom line. As Kirk Richardson, director of sustainability for KEEN Footwear, puts it, “Access to beautiful, wild, and unspoiled public lands is essential to many outdoor businesses.”

It’s no surprise, really, that local business leaders want to see their nearby public lands protected. In the 12 years after the 1996 designation of Utah’s Grand Staircase-Escalante National Monument, the economies of neighboring counties showed strong growth, with 38 percent more jobs and real personal income rising 40 percent. That’s part of the reason the majority of Utahans supported the designation of that national monument, according to a 2011 poll by Republicans for Environmental Protection.

Every 20 to 25 years, the BLM reviews its plans, giving the public the opportunity to weigh in on how landscapes should be managed. Because the impact of quiet recreation visits is so significant, it makes sense to consider their economic contribution when land managers make important land use decisions.

U.S. public lands are a treasure for current and future generations. There is much to be conserved on BLM lands, from the stunningly beautiful landscapes that are a magnet for campers and hikers, to the rich wildlife habitat that attracts hunters and anglers. Going forward, BLM decision-makers must manage our public lands in a way that responsibly balances conservation with development so that we can protect the engine that powers the sustainability of our western economies.