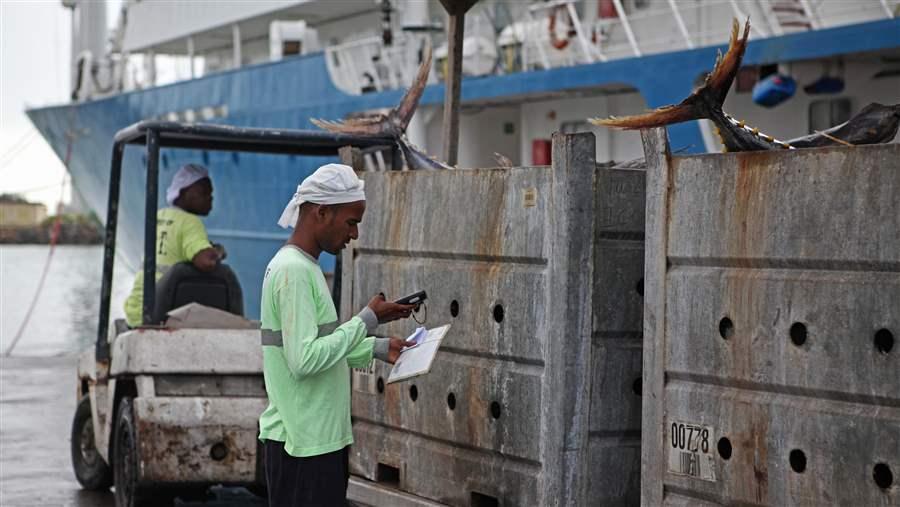 Under the PSMA, port officials can order inspections of vessels with spotty legal histories or those that officials believe might have fished illegally.

Note: This article is part of the series Ending Illegal Fishing 2016

In 2015, seven governments ratified the Port State Measures Agreement (PSMA), the United Nations treaty intended to strengthen port inspection protocols for foreign-flagged fishing vessels. When in place, the pact will help prevent illegally caught fish from ever getting to market and strip from poachers the opportunity to profit from their crimes. If there’s no money in the game, there’s no incentive for the bad guys to keep stealing.

The treaty, adopted by members of the United Nations Food and Agriculture Organization (FAO) in 2009, will enter into force once it has been ratified by 25 governments. As of early 2016, 22 have done so, including the European Union. We are confident that 2016 will bring the four more needed.

The PSMA, along with commitments by individual states to share information and follow up on reports of misconduct, will help stop illegal catch from entering the market by requiring that foreign-flagged fishing vessels provide information to port officials about a boat’s licensing, ownership, and catch. Under the PSMA, port officials can order inspections of vessels with spotty legal histories or those that officials believe might have fished illegally. When those inspections reveal wrongdoing, port officials can deny entry. They also are obligated to share information about the findings with neighboring ports and countries to thwart “port shopping” by illegal fishers. The treaty also allows port authorities to deny access services, such as fueling, to vessels that may be linked to illegal fishing or unlawful transshipment of catch.

In recent years, Pew has worked with partners, such as the FAO; Norway; the Central American Fisheries and Aquaculture Organization (OSPESCA); and Stop Illegal Fishing, an African intergovernmental working group, to help develop plans for how the treaty will work when ratified and the best approaches to its implementation. To ensure the PSMA’s effectiveness, Pew and others also have advocated for its widespread ratification. Several countries have made formal commitments to join; we hope that their ratifications will soon follow.

The participation of African nations will be critical because the treaty’s implementation will benefit from cooperation among states within regions. Three members of FISH-i Africa, a coalition of western Indian Ocean nations working to stem illegal fishing, have already ratified. Madagascar and Kenya are expected to join in the coming months. Other African states, such as Morocco and Cape Verde, are likely to follow.

This year, we will continue to work through regional organizations, such as FISH-i Africa, OSPESCA, and the Pacific Islands Forum Fisheries Agency, to encourage more ratifications. We also will work these  and other partners to identify and analyze gaps in port controls, using what is known as the capacity needs assessment to help determine what additional steps might be needed. We are optimistic that the PSMA will enter into force in 2016.