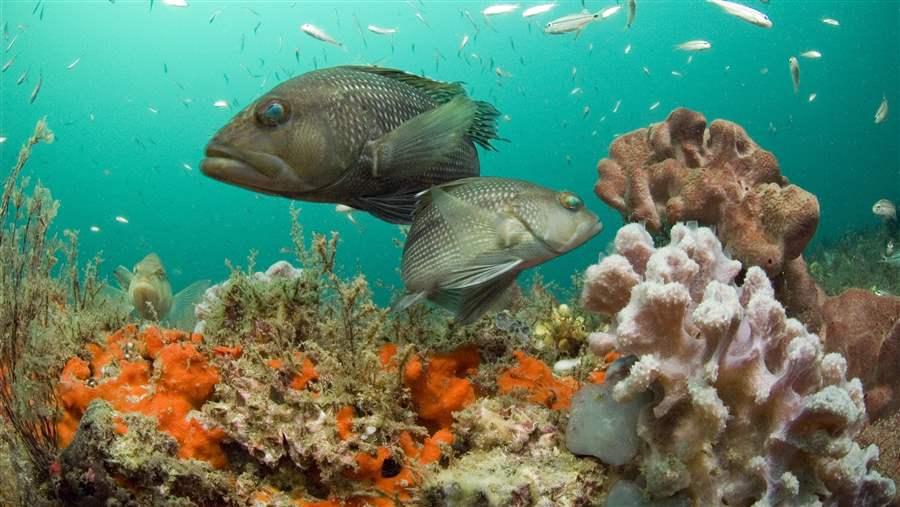 In 2012 and 2013, sea temperatures along the New England coast spiked, shattering records that stretch back a century and a half. As the waters warmed, fishermen hauled in some unexpected catch, including species that are normally found far to the south.

Although some of these unusual catches are likely just one-off events, scientists have found that many of these incidents indicate a larger and important trend of fish species moving as climate change heats our oceans.

One of those fish on the move is the black sea bass, which has long been important for commercial fishermen across the mid-Atlantic and the southeast and is a favorite target of recreational anglers, especially in the Carolinas.

Fisheries managers, who use scientific surveys to set sustainable catch limits for black sea bass, allotted the quota for catches to fishermen in the region where, based on historical data, they assumed the fish would be found. But the fish had other plans.

Analyses of catch data and scientific surveys found the sea bass population moving north along the coast over the years as sea temperatures rose. Now, commercial fishermen in New England are catching black sea bass they aren’t allowed to sell, while those from North Carolina must steam north to find enough fish to use their quota.

This regulatory mismatch creates headaches for fishermen, but it’s not the only concern fisheries managers have. When a fish species enters a new ocean ecosystem, it is often vulnerable to overfishing and depletion because it will be on the fringe of its environmental tolerance. Additionally, the effects on predator-prey relationships and competition among species can create other problems. For example, black sea bass prey on lobsters—an obvious cause for worry if you’re a lobsterman.

Fisheries managers and scientists are beginning to grapple with these issues as they find more examples of fish on the move. The National Oceanic and Atmospheric Administration worked with researchers at Rutgers, the state university of New Jersey, to produce an interactive tool on fish and warming called OceanAdapt, which provides some practical and reliable information about where different species have been found over time. The Mid-Atlantic Fishery Management Council hosted a groundbreaking workshop on climate change and its effects on fishing, and the resulting report included important recommendations.

One of the best ways to help fishing communities deal with the challenges of climate change is by implementing the “big picture” approach known as ecosystem-based fisheries management. Under this system, managers can better assess the likely effects of warming waters and the arrival of new fish species. Equipped with the best ecosystem science, officials can proceed with caution before allowing fishing, ensuring that new fisheries will be sustainable for the long term.