In a sign that the U.S. economic recovery is widespread, personal income in all states is back above levels seen at the Great Recession’s onset. But growth has varied among states, ranging from a constant annual rate of less than 1 percent in Nevada to more than 5 percent in North Dakota.

Although growth since the recession has been far-reaching, its pace has been slower than normal. Since the downturn began in the fourth quarter of 2007, estimated U.S. personal income has increased by a constant annual rate of 1.6 percent through the third quarter of 2015, compared with 2.8 percent over the past 30 years, after accounting for inflation.

The expansion was aided by a 3.7 percent growth rate over the most recent four quarters, after adjusting for inflation. All states but one—North Dakota—added to their post-recession gains in the past year.

Personal income estimates are widely used to track state economic trends. Comprising far more than simply employees’ wages, the measure counts all sorts of income received by state residents, including earnings from owning a business or investing, as well as benefits provided by employers or the government. As the economy expands or shrinks, state personal income also changes. These trends matter not only for individuals and families but also for state governments, because tax revenue and spending demands may rise or fall along with residents’ incomes. 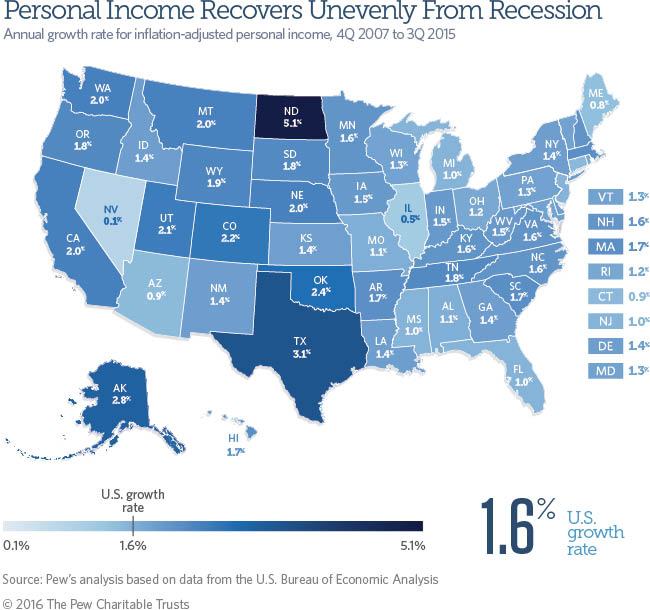 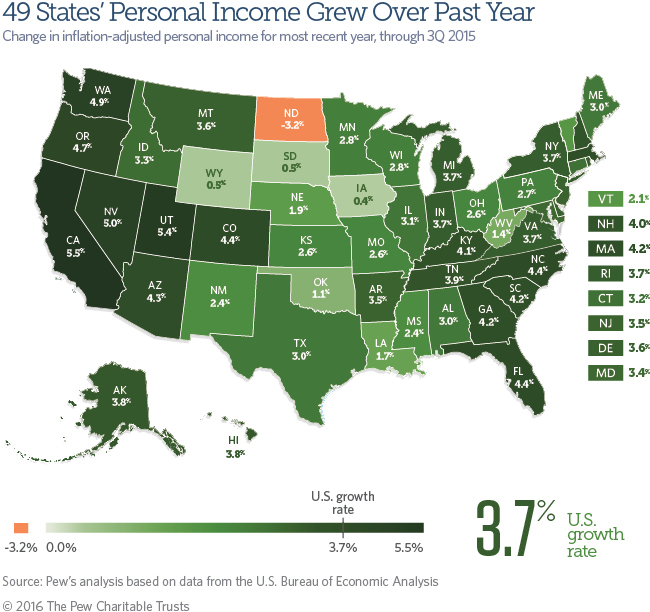 Trends in inflation-adjusted personal income for the most recent year, through the third quarter of 2015:

Over the past year, personal income in 42 states grew faster than its pace since the end of 2007, accelerating those states’ economic expansions. In seven states—Iowa, Nebraska, Oklahoma, South Dakota, Texas, West Virginia, and Wyoming—personal income increased in the past year but at a slower pace than each state’s constant growth rate since the recession, moderating their growth trends. North Dakota—the only state with short-term negative growth—still enjoyed the greatest growth within the U.S. for inflation-adjusted personal income since the recession’s onset.

Although economic growth is widespread, states’ recovery from the recession is uneven. According to Pew’s Fiscal 50 research, 21 states still were collecting less tax revenue, after adjusting for inflation, in the second quarter of 2015 than at their individual peaks before or during the recession. Meanwhile, employment measures show that many states’ labor markets have yet to completely recover.

Download the data to see state-by-state growth rates for personal income from 2007 through the third quarter of 2015. Visit The Pew Charitable Trusts’ interactive resource, Fiscal 50: State Trends and Analysis, to sort and analyze data for other indicators of state fiscal health.