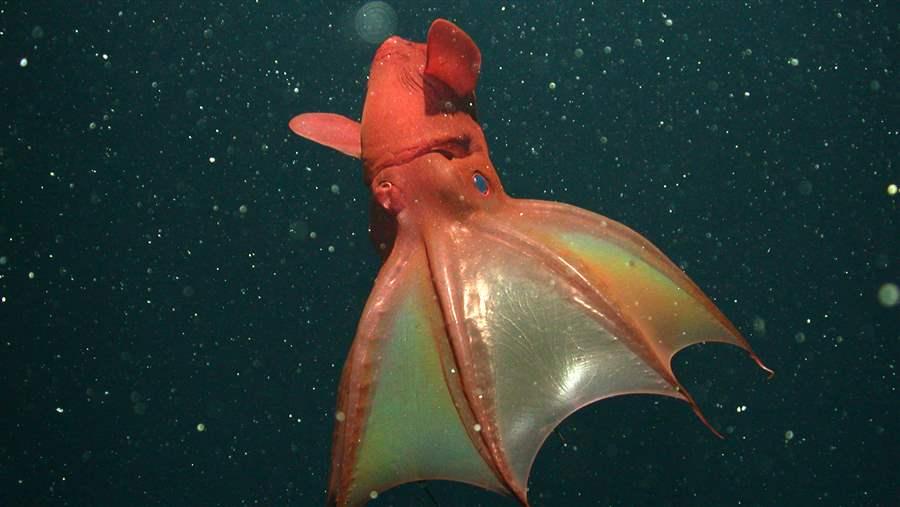 The vampire squid is a soft-bodied, passive creature, about the size and shape of a football. Its name comes from its resemblance to a vampire, owing to its dark red body and cloaklike web that stretches among its eight arms. It inhabits the deep waters, where there is almost no oxygen and relatively few predators exist, and is considered a living fossil because it has changed very little over the past hundreds of millions of years.

Imagine if you could hike into the depths of the Gulf of Mexico. The sea level scenes that are so familiar to millions of Americans would open like a watery curtain to reveal remarkably diverse, and crucial, natural wonders.

The journey would start near the shore where saltwater marshes and seagrass beds serve as nurseries for young fish and shrimp. As you move away from land into the nearshore waters, step carefully around the endangered sawfish with its bladelike snout studded with teeth on both sides.

Follow a gag grouper and other fish that move offshore as they grow older. They would lead you to the edge of the continental shelf, where ancient limestone cliffs and ledges start to give way to the depths.

Then plunge into canyons and gorges that are thousands of feet deep and play home to crabs, worms, shrimp, large groupers, sharks, swordfish, and marlin. Enter the Desoto Canyon in the middle of the northern Gulf and imagine strolling on ancient sediments deposited millions of years ago by the eroding Appalachian Mountains that were once as tall as the Himalayas are today. At depths of 2,400 to 3,000 feet, the nutrient-laden waters foster a diverse array of sea life. 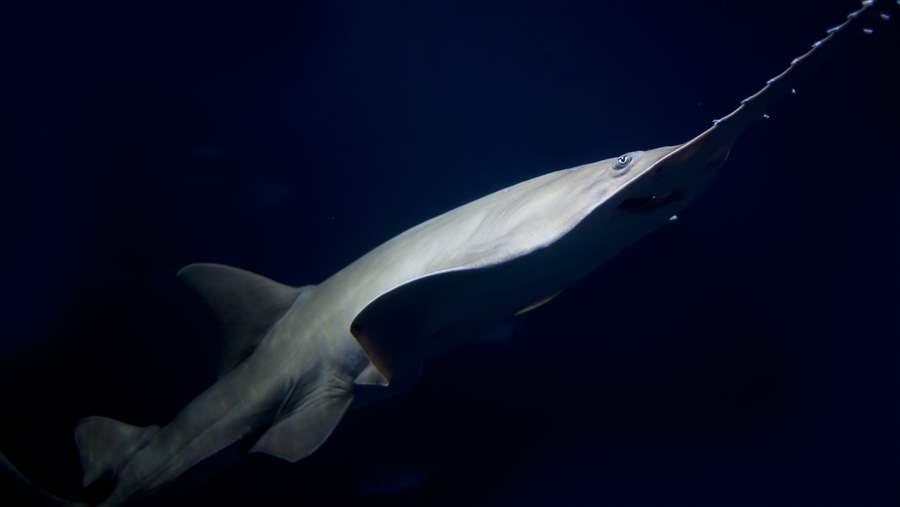 The endangered sawfish, distinguished by its bladelike snout studded with teeth on both sides, inhabits the Gulf of Mexico.

Near the canyon, at a site called Viosca Knolls, you will come across some of the Gulf’s densest concentrations of deep-sea corals. These beautiful reefs, which thrive in the dark, also exist in other places throughout the Gulf.

Pass by giant but gentle whale sharks, a pod of killer whales, and vampire squid —the latter so named because of their black color, red eyes, and cloaklike webbing of skin that connects their eight arms.

Marvel at the mineral-rich waters flowing from deep within the Earth, emanating out of hydrocarbon vents and cold seeps. Despite their name, these seeps are actually just a little warmer than the surrounding ocean. Typically found between 1,000 and 9,000 feet deep, these places form biological hot spots where sea life doesn’t thrive on sunlight but rather on chemicals that spew from the vents.

This strange seascape is home to tubeworms, one of the weirdest and oldest (they can live to at least 250 years) animals on Earth. They colonize on the seafloor, much like corals do, and push tentacles or plumes out of their tubes, which can grow to more than 10 feet long. Without a mouth or digestive system, the tubeworms absorb chemicals from the water—which bacteria living in the tubeworm convert into food, similar to what plants do with sunlight. 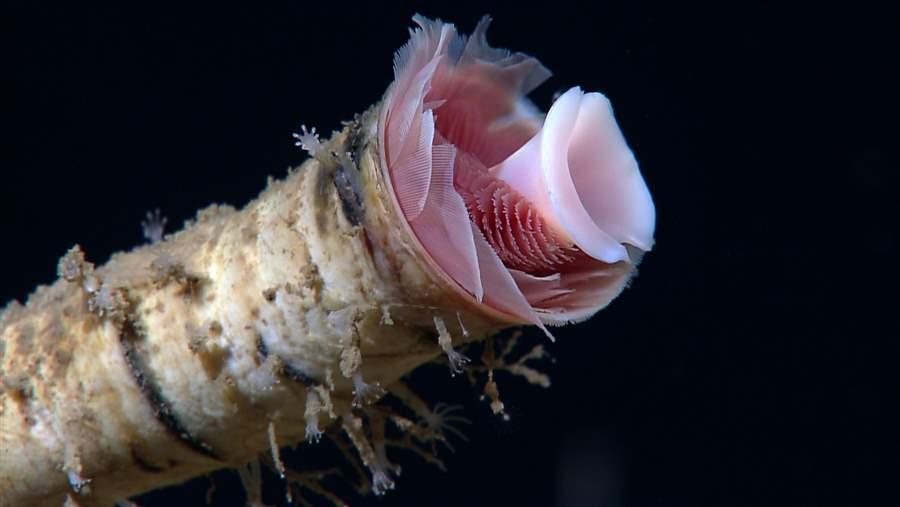 A tubeworm near a cold seep in the Gulf of Mexico readies to send out its plume—a complex structure of tightly stacked sheets of tentacles used for absorbing chemicals from the water. Bacteria living in the tubeworm convert the chemicals into food or energy for the host.

Other mysteries abound, because throughout the region seeps, corals, and many other features haven’t been completely mapped or fully studied. So, as you rise again to the familiar surface where the Gulf serves as an economic engine for the region and the country—supplying oil, seafood, and major shipping lanes—remember that many secrets remain unlocked and unstudied in, and under, the 600,000 square miles of vital Gulf waters. Knowing more about the Gulf of Mexico and cataloguing its assets are the keys to improving the management of its resources, which include important fish habitat and corals.

That information also can be used to bolster emergency response plans for such things as oil spills and ever-changing environmental conditions, including ocean warming, increasingly acidic waters, and more frequently occurring and stronger red tides (a harmful, toxic algae bloom).

While it’s important to know more about the Gulf, fishery leaders also can use existing scientific data to take a big-picture view of the environment when managing resources. Ecosystem-based fisheries management is a more comprehensive way to govern fish and fishing. Instead of studying one species at a time, this big-picture approach considers such things as habitat, food needs, and predator-prey relationships when setting fishing rules. 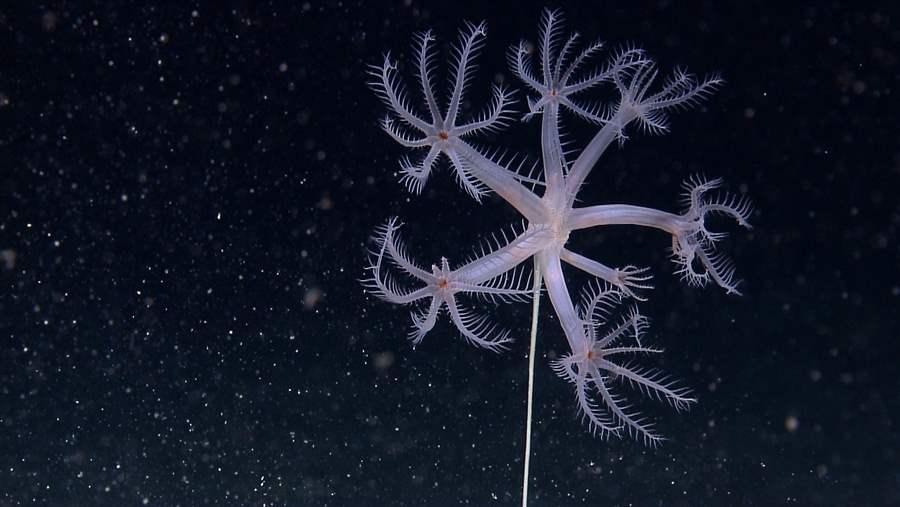 A stalked octocoral is one example of the many intricate types of deep-sea corals found in the Gulf of Mexico.

As Congress works to renew the nation’s federal fish law, the Magnuson-Stevens Fishery Conservation and Management Act, we at Pew hope that lawmakers will promote this comprehensive approach. The act is turning 40 years old in April and could use an update. It’s time for a new focus in fisheries management. For more information, please visit www.pewtrusts.org/healthyoceans.