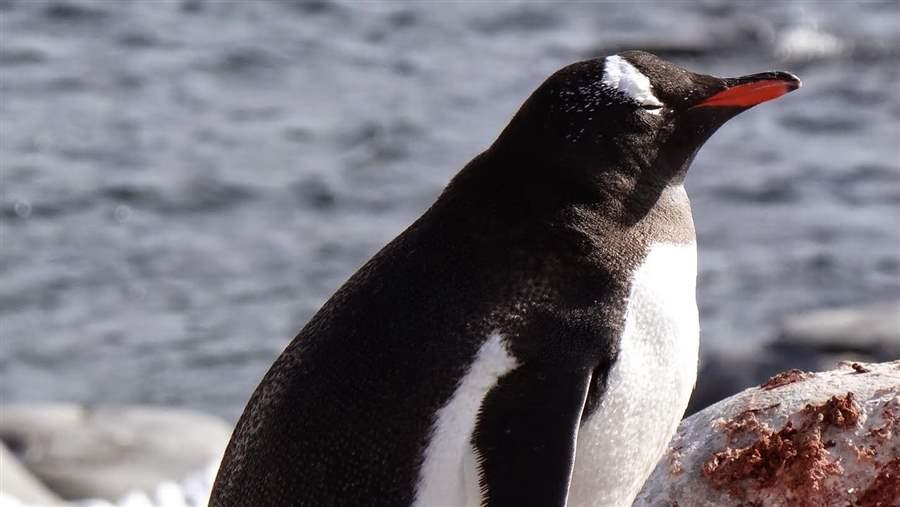 A gentoo penguin on the rocky shores of Jougla Point.

At SeaWeb Seafood Summit in Malta, representatives from the fishing industry, environmental nonprofits, and the scientific community will discuss the Antarctic krill fishery and its long-term viability

Antarctic krill, the tiny, shrimplike crustaceans that form the base of the Southern Ocean food web, are in high demand—and not just from the species that depend on them for food. While predators like penguins and whales rely on krill as essential protein, a booming fishing industry has become increasingly concentrated around the Antarctic Peninsula—the fastest-warming place on the planet—to satisfy increasing demand for krill. Krill is used as feed for industrial farming and aquaculture, and to create the various omega-3 supplements that people are taking more and more.

On Feb. 3 at 9 a.m. Central European Time, as part of the SeaWeb Seafood Summit in Malta, Andrea Kavanagh, director of The Pew Charitable Trusts’ global penguin conservation campaign, will moderate “The Great Krill Debate,” a panel discussion about the growing demand for krill, the fishery’s sustainability, and the need to balance human demand with the health of the Antarctic ecosystem and the effects of climate change.

“Antarctic krill are the keystone species of the Southern Ocean ecosystem,” said Kavanagh. “This krill debate is an important opportunity to hear the perspectives of industry representatives, scientists, and environmentalists regarding the threats to krill and whether the fishery is adequately regulated to protect predators like penguins in a warming climate.”

Trivelpiece will set the stage with the science of the Antarctic ecosystem and explain why penguins are well-known as sentinels of ocean health. According to Trivelpiece, “The data very clearly show declines in the populations of two species of penguins over the years, which can be linked to a number of environmental stressors, including climate change and krill fishing.”

The Antarctic krill fishery, which dates back to the 1960s, has been expanding over the decades. Since 2010, the global catch has increased by 40 percent, and China recently announced plans to increase its investment in the fishery. Nordrum of Aker BioMarine said: “We welcome the opportunity to discuss the Antarctic krill fishery and, in particular, our commitment to eliminate bycatch, support science and fishery management, and minimize the environmental impact of our vessels.”

Greenpeace is concerned, however, about this growth in capacity. “This fishery should not be labeled sustainable,” Hocevar noted. “There is too little known about krill abundance and distribution and too much at stake for krill-eating penguins, whales, seals, and fish in this vulnerable ecosystem.”

The panelists will each have time to present their viewpoint on the krill fishery, and through new polling technology, audiences will be able to respond to questions in real time, as well as vote on who they think won the debate.

“The voices on the panel are some of the most respected in science, the NGO community, and the fishing industry,” noted Kavanagh. “I’m looking forward to a lively debate about where the krill fishery is headed in the 21st century.”

Those who aren’t able to attend the panel while at the summit can follow along  on Twitter and the conference app using the hashtags #swss16 and #KrillDebate.

Krill Fishing in the Antarctic Peninsula

CCAMLR has a mandate to protect all biodiversity within Antarctic waters. It must protect the Southern Ocean by protecting the base of the food web&mdash;krill.