Without clarity, states can have a challenging time setting goals and savings targets for their rainy day funds, according to a new report from The Pew Charitable Trusts, Why States Save: Using Evidence to Inform How Large Rainy Day Funds Should Grow, released Dec. 8.

Is the purpose of the fund explicit or implied?

Pew classified states with distinct statutory or constitutional language that describes the intended purpose for their rainy day fund as explicit. Many states, however, do not separately state a purpose for their fund in law. Instead, these states provide language indicating only when withdrawals can be made. These states were identified as providing an implied purpose. 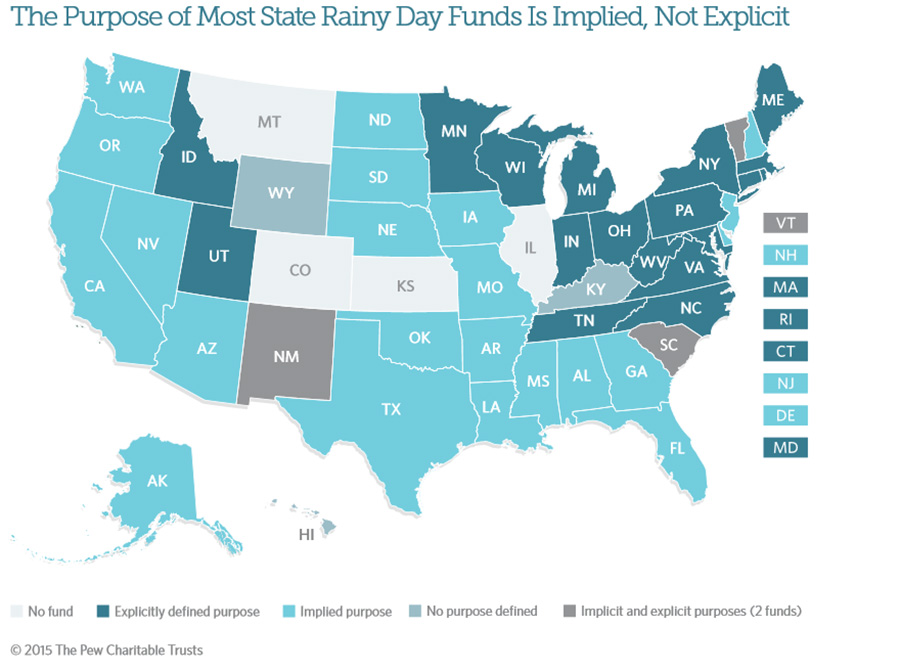 Is the fund defined narrowly or broadly?

In states where laws set forth clear or measurable objectives for the circumstances under which the rainy day fund balance can be used, the report classified the definition as narrow. States that had expansive and nonspecific objectives for their funds were identified as having a broad definition.

Although there are advantages and disadvantages to each approach, implied or broad purposes can make it difficult for states to determine how much to save. In Texas, for example, the implied and broad parameters that define the state’s Economic Stabilization Fund contribute to the lack of consensus on an appropriate savings target.

In contrast, states with explicit and narrow parameters for their rainy day funds, such as Virginia and Minnesota, find that decisions about how much to save are relatively straightforward.

Virginia’s Revenue Stabilization Fund, for example, can hold a maximum balance of 15 percent of the prior three years’ average state tax revenue, an increase from the 10 percent maximum that was in place before 2010. The state raised the limit after concerns arose about the fund’s adequacy during the last recession compared with the stated objectives.

“The only use for the … fund in the constitution is [to fill] a shortfall in an enacted budget,” said Virginia Secretary of Finance Ric Brown. “It is appropriately named as a revenue stabilization fund. It is there to stabilize revenue over the business cycle.”

Minnesota’s Budget Reserve Account may be used when a negative budgetary balance is projected and when objective measures, such as reduced growth in total wages, retail sales, or employment, reflect downturns in the state's economy.” These considerations help inform a rigorous two-part process.  First, economists perform an annual study evaluating volatility in the parts of the state’s economy that are subject to taxation. The calculations allow them to derive a savings target that can provide full coverage—a much higher standard than in Virginia—against most possible revenue downturns. Since this policy was enacted in 2014, the state has raised its combined savings target for the Budget Reserve and Cash Flow accounts to $2.03 billion, of which the state currently holds $1.6 billion in savings.

In all, 19 states describe their rainy day funds in terms that are explicit and narrow, providing the clearest guidance to policymakers for determining an evidence-based savings target. 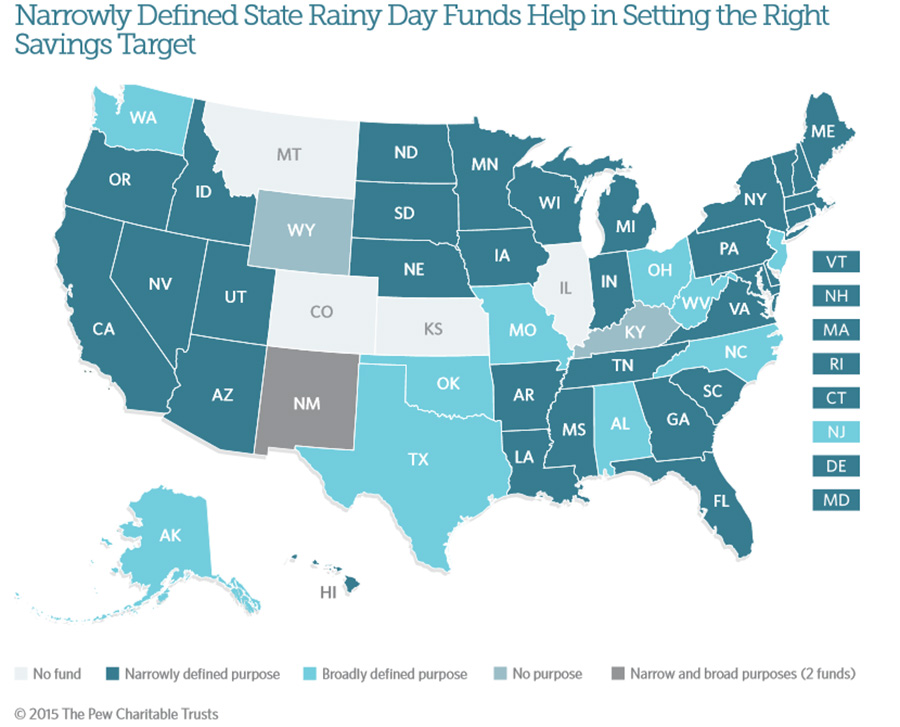