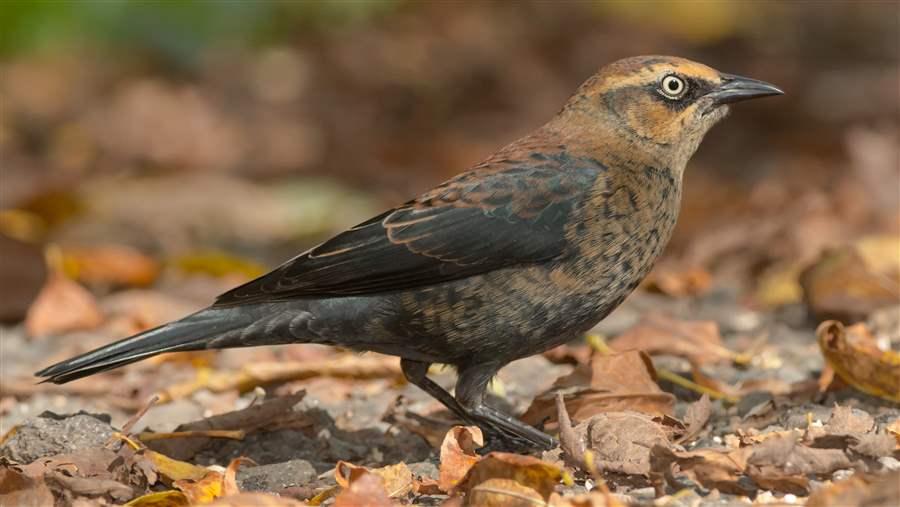 The rusty blackbird migrates to locations throughout the boreal forest.

For millions of us who live in urban areas, one of the small but essential ways in which we connect to nature each day is by listening to the sound of songbirds. They provide welcome, therapeutic relief from the noise pollution that permeates modern city life, whether it’s an ambulance’s siren, the constant hum of traffic, or the loud whine of a neighbor’s leaf blower.

Persistent noise pollution may irritate us, but here’s an interesting question: Does it matter to those songbirds? New research shows that the answer is an emphatic “Yes!”

A study released in September 2015 used an innovative experimental design, with audio speakers placed in a roadless area in Idaho. The recorded sounds of passing cars were played in the previously quiet wilderness.

The researchers captured migrant birds in the area, and also at another nearby location where no sounds were broadcast, in mist nets. They found that not only was the total number of birds reduced in the area where the road sounds were played but that the physical condition of the birds that stayed in the noisy spot was worse.

The researchers wanted to learn why there were fewer birds—and stressed ones at that—in the louder area, so they conducted another experiment. They captured some migrant white-crowned sparrows and let them feed in a large, enclosed area, sometimes in silence and sometimes with traffic noise. They videotaped the sparrows’ behavior. Birds experiencing the noisy environment spent more time looking around vigilantly for possible danger, while those in quiet moved around and fed more vigorously. The researchers surmised that in the real world, birds near roads or in other noisy places must generally spend less time feeding and more time watching out for danger.

This study is just one of many that have shown that noise alone from roads or industrial installations can decrease the abundance of many bird species. In particular, a University of Alberta researcher, Erin Bayne, has demonstrated a decrease in the number of ovenbirds near industrial sounds at sites in northern Alberta’s boreal forest during the breeding season. At these times, singing birds face an added complication: It may be hard for potential mates to hear their songs over noise created by humans. 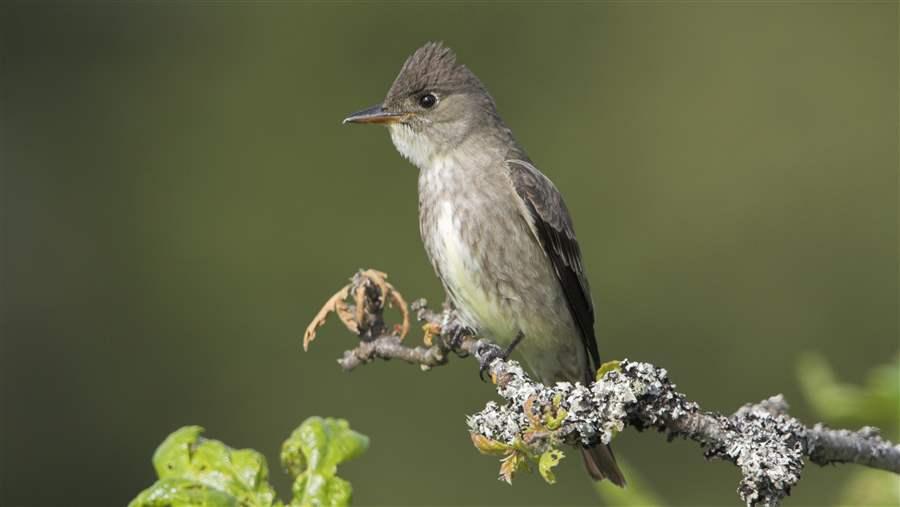 Migratory songbirds such as the olive-sided flycatcher thrive in the boreal forest.

These findings demonstrate the critical importance of maintaining very large areas that are free of roads so that birds—and other creatures—have breeding grounds where they can safely raise their young and feed during migration.

The boreal forest region in Canada is one of the increasingly rare areas where there are still excellent opportunities to conserve large tracts of intact, primary forest free of large-scale industrial noise pollution.

Working with partners such as the Canadian Parks and Wilderness Society, Ducks Unlimited Canada, and Indigenous First Nations, The Pew Charitable Trusts is committed to ensuring the ecological integrity of the boreal through a balance of strict protection and sustainable development practices.

The work is paying big dividends: Millions of acres are being protected for a wide range of wildlife, boreal songbirds included.

In 2015, for example, almost 5 million acres of the boreal were committed to parks and protected areas in Quebec’s Broadback River Valley and with the creation of the Mealy Mountains National Park Reserve in Newfoundland and Labrador. Another 6.4 million acres in the Northwest Territories moved closer to permanent protection in the proposed Thaidene Nene National Park Reserve and adjacent territorial protected areas. These are all places where songbirds—such as the white-crowned sparrow, rusty blackbird, and olive-sided flycatcher—thrive in the relatively silent surroundings of an intact natural environment.

Conservation science has been clear that maintaining large areas free of roads and other industrial disturbances is essential for the long-term survival and health of animals and plants, and to ensure clean air and water for the planet.

This latest research shows that the impacts of industrial, human-generated sounds on birds are yet another reason why such areas are so important.

Jeff Wells is a science adviser to The Pew Charitable Trusts and science director at the Boreal Songbird Initiative.