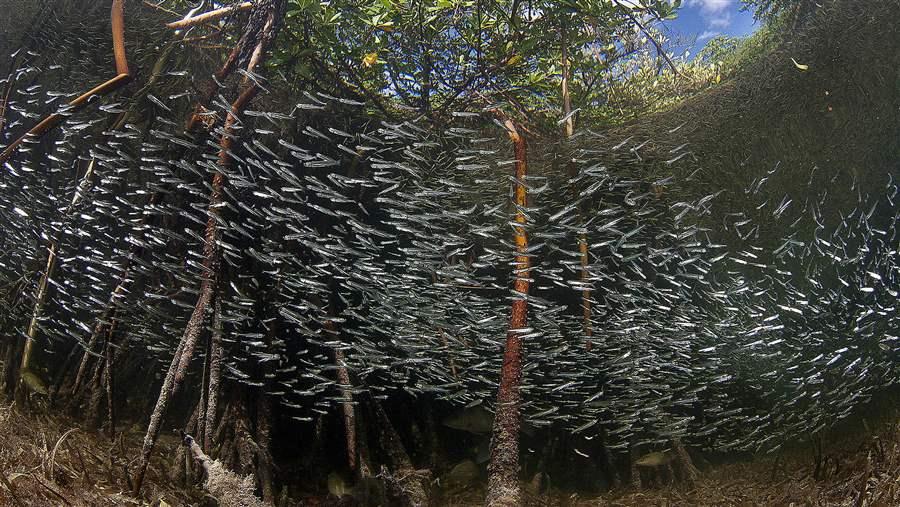 Anchovies, snapper, and other wildlife seek cover from predators within the mangrove forest. These small, schooling fish are among the many species of forage fish which help fuel fishing and outdoor recreation in Florida waters.

The Obama administration is finalizing revisions to an important fish management rule known as National Standard 1. As proposed, the rule misses a critical opportunity to advance a modern, big-picture approach to managing fisheries.

The National Oceanic and Atmospheric Administration’s Fisheries Service (NOAA Fisheries) developed the rule and, together with the regional fishery management councils, will use it as guidance when enforcing the Magnuson-Stevens Fishery Conservation and Management Act, the primary law related to U.S. ocean fish. The act requires that managers prevent overfishing and rebuild depleted fish populations, but as proposed, the rule would make this mandate more difficult to achieve and would unravel recent progress in ending overfishing.

The proposed rule would increase the risk of overfishing by allowing managers to postpone lowering catch limits, even when scientific information called for it. It would also permit managers to extend timelines on plans that were failing to restore depleted populations to healthy levels rather than requiring that they correct ineffective plans to keep them on schedule. These and other provisions would weaken our current fishery management system, threaten ocean health, and diminish benefits to fishing communities.

But NOAA’s proposed rule curiously fails to incorporate this more comprehensive approach into fishery management decision-making, ignoring the impacts of stressors on ocean health such as climate change. For example, scientists and fishermen report that fish populations are shifting northward and to greater depths in search of cooler water, but the draft rule is silent on how managers should handle this new reality.

In addition, the proposal does not improve guidance for managing forage fish—the small fish, such as anchovies and sardines, that feed seabirds, marine mammals, and larger fish. The rule should call on managers to protect this essential role of forage fish when establishing catch limits for them.

The oceans are facing significant threats, including habitat destruction and climate change, which demand a big-picture approach that considers the effects of fishing on the wider ocean ecosystem and how changes in the environment affect fish populations. The proposed rule’s significant oversights are a missed opportunity to address current challenges and prevent future crises.

More than 100,000 people, including many fishermen and chefs, expressed similar concerns and called for changes to the rule during the public comment period.

National Standard 1 is a crucial part of the foundation on which our fishery management system is constructed. But this proposed revision could undermine, rather than build on, the success the U.S. has recently enjoyed. Pew encourages the administration to make the right choice and create a rule that will support a brighter, more stable future for U.S. fisheries and the ecosystems upon which they depend.