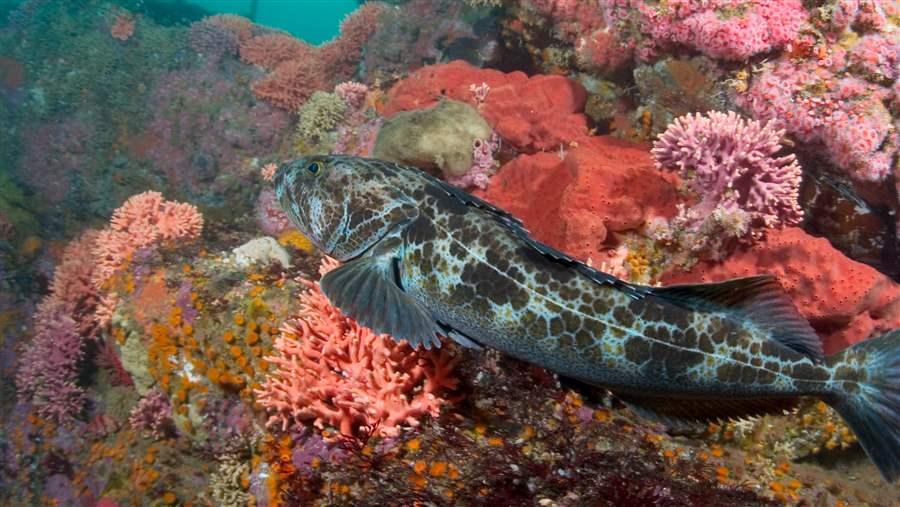 The U.S. West Coast boasts some of the best fishing grounds in the world for species such as lingcod, shown here off California. The collapse of West Coast groundfish had many causes, but one of the most important was a failure to account for the species’ biology.

A federal disaster struck the U.S. West Coast in 2000, delivering a serious economic blow. The emergency wasn’t sudden like an earthquake, landslide, or tsunami but instead culminated a slow-brewing bust of a fishery that is a key to the region’s economy and ecology. The collapse of West Coast groundfish underscores the need to use an ecosystem-based approach in managing our nation’s fisheries.

Fishing for West Coast groundfish such as lingcod increased rapidly in the late 1970s and early 1980s. Landings peaked in 1982 even as the fishing fleet continued to grow, and effort remained high through the 1980s and 1990s. But even as groundfish became increasingly important to many coastal communities, the boom put the species—and the people whose livelihoods depended on it—at risk. By 2000, key groundfish populations had dwindled to the point that federal officials declared the entire fishery a disaster.

Numerous factors contributed to the collapse, notably an inadequate understanding of the basic biology of many groundfish species. Many of these species live extremely long lives—lasting for decades, some more than 100 years—and therefore are much more vulnerable to overfishing than was previously believed. Fishery managers also overestimated the reproductive success of many stocks. Fishing limits that seemed reasonable at the time turned out to be far too aggressive for species that can take a decade or more to mature and reproduce. Exacerbating this problem for several species, most reproductive events fizzle out because ocean conditions don’t cooperate. Often water temperature, food availability, and other factors don’t line up right, and very few of the larvae actually become juvenile fish.

Fishermen and fishery managers collaborate to recover from disaster

After the federal disaster declaration in 2000, fishermen and managers took strong action by closing large areas to fishing to reduce pressure and protect habitat. Because of these actions, severely depleted, long-lived rockfish species, such as canary and darkblotched rockfish, are fully rebuilt or well on their way. My personal favorite, lingcod, made a full recovery by 2005, four years ahead of schedule.

Today we know much more about the biology of these and other species than we did a generation ago. Congress will have a perfect opportunity to ensure that fishery managers across the country apply that cautionary knowledge when it reauthorizes the primary law that governs fishing in U.S. ocean waters, the Magnuson-Stevens Act. Many fish species are already shifting their ranges significantly because of warming ocean waters. More than ever, it’s important for fishery managers to gather and analyze the best scientific data and establish necessary management measures before allowing fishing to begin on new species or in new territories. They should be aware of, and protect the status of, the fish population to be targeted, its role in the food web, its reproductive capacity, and other biological, ecological, social, and economic factors.

In the case of West Coast groundfish, local fishermen and managers deserve credit for the work they have done to recover lingcod and other groundfish species. Given a chance, many of these species are now thriving within the rocky reefs, canyons, and corals of the North American continental shelf.

It’s a success story that came at a heavy, but avoidable, cost to West Coast fishermen. The aggressive response to the collapse serves as an example of how fishermen, managers, and scientists working together can change course and rebuild a fishery. But the episode also serves as a cautionary tale on the importance of building and applying good science from the outset and demonstrates how that sort of precaution can go a long way toward maintaining fish and fishing communities for generations to come.