To stop illegal fishing and other crimes taking place on the ocean, authorities first need to be able to recognize and track vessels.

Given that the vast majority of vessels on the water are operating legally, and that illegal fishing looks very similar to legitimate activity, authorities must be able to quickly identify boats, spot telltale patters of fishing, and access other informative data, including whether a vessel is authorized to fish in a given area.

Doing that for vessels that follow the rules is usually easy. Most broadcast their position, which allows them to be seen by authorities.
Although identifying noncompliant vessels is more of a challenge, advancements in technology are helping authorities find and track ships even when their captains attempt to “go dark” to avoid detection.

I wrote previously that successfully tracking 185,600 large fishing vessels as they travel the world’s ocean may start with a low-tech seven- digit code called an IMO number, but it doesn’t end there. 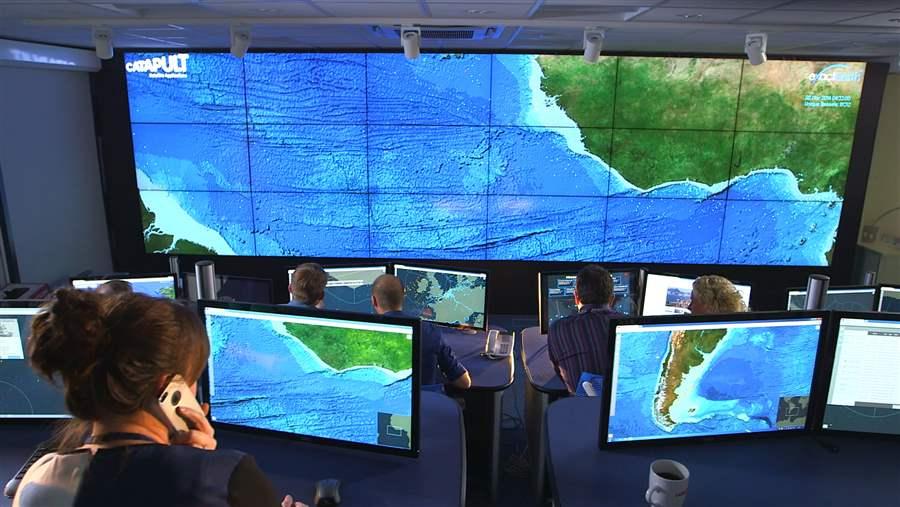 Project Eyes on the Seas is a satellite-based platform that provides maritime monitoring and surveillance data.

Today, vessels of all types are tracked primarily by two types of broadcasting systems: the automatic identification system (AIS) and the vessel monitoring system (VMS). Each one has strengths and weaknesses.

At first glance, these systems appear to provide an accurate picture of activity at sea. That said, when I served in the British Royal Navy we had a saying that “just because it is in color doesn’t mean it is true.”

The point is that while technology can do amazing things, it can still be rigged to fool its users, and AIS and VMS are no different. Thus, when using a vessel tracking system, it is critically important to have a thorough understanding of the underlying data sources, their known gaps, and their reliability.

AIS was designed to prevent vessels from colliding at sea, and it performs that function very well.  Used properly, it allows vessel crews to spot other boats, including the smallest ones, even in heavy seas or in fog. It is relatively inexpensive to install, operate, and maintain but is not mandatory on all ships, and thus many fishing vessels do not have it.

The system is also easily manipulated, allowing users to transmit false data, such as vessel name, type, or even position. Further, a vessel master can easily turn off his AIS. Doing so is against the rules, but some illegal fishing crews do it anyway, weighing the low risk of getting caught against the profit from participating in a crime that is estimated to take up to $23.5 billion worth of fish from the oceans each year.

In fact, even some law-abiding fishers often want to turn off their AIS because the system is “open” to anyone willing to pay for it and that, some captains say, reveals their prized fishing spots to competitors.  System providers are working to address the technology’s shortcomings and expand the application of AIS as a tracking system. Until then, however, these limitations must be taken into account.

The AIS remains vital for vessel safety, and governments, especially coastal and flag states, should require it on all large fishing vessels operating in their waters or flying their flag.

Vessel monitoring systems were developed specifically for managing fisheries and, largely for that reason, are “closed”—meaning that the data transmitted are visible only to governing bodies and authorities, not to other vessels’ crews. VMS is used not only to track vessels but also to report catch data and other fishing activities to government agencies responsible for collecting such information; the requirements for precisely what a VMS will transmit are often tailored to a specific fishery or region.

The downside is that proprietary data are, for the moment, shared only among the vessel’s crew, the coastal state in whose waters the boat is fishing, and the flag state responsible for the vessel. So unless a specific data-sharing agreement is in place, most countries that border one another cannot see vessels operating outside their respective maritime borders.

VMS is an excellent system but could be improved if it was used globally and operated consistently. Ultimately, the data should be warehoused in an agreed-upon central location or available across national boundaries. That would allow more seamless coordination among countries in detecting and responding to suspected maritime crimes, regardless of where they happen.

A system that relies on either AIS or VMS, or even a combination of the two, can show information only from vessels that willingly provide data.  Any vessel not sending positional information essentially operates out of sight of any authority. So a view of a marine reserve would be likely to show vessel tracks outside the boundaries but nothing within. An operator who has entered a reserve to fish illegally almost certainly would turn off his transmitter.

That’s why monitoring platforms must integrate more than these two systems and use other tracking technologies to alert authorities to the presence of unwelcome vessels.  This information needs to be shared among all countries and the full spectrum of fisheries agencies to ensure the quickest and most informed response to suspected illegal activity.

The FFA’s Regional Fisheries Surveillance Center takes in information from several vessel-monitoring systems and combines these data with those derived from AIS. Analysts monitor, review, and, where appropriate, compare and evaluate suspect activity and other anomalies.  The FFA member countries also share VMS data with each other.

A pact among FFA members called the Niue Treaty Subsidiary Agreement allows them to use the most appropriate enforcement assets available among them to respond to emergent threats or risks, intercept suspicious vessels, and even arrest suspects and seize vessels on behalf of other members.

In October, Operation Kurukuru brought together hundreds of enforcement personnel from all 17 FFA member countries. The team used ships, aircraft, and satellite tracking technology to identify high-risk fishing vessels operating both within their respective waters and in the adjacent high seas areas. The information gathered during that operation led to the at-sea inspection of more than 100 fishing vessels.

Watching from space: Project Eyes on the Seas

Not every region or developing country has access to an FFA-style program. That’s one reason that Pew invested in the development of Project Eyes on the Seas, a satellite-based platform that provides maritime monitoring and surveillance data, including to countries that ordinarily would not be able to afford it.

The surveillance and tracking system is already in use by the British government to monitor that country’s Pitcairn Islands territory, and is being used to watch the waters of several countries in cooperation with the Polynesian Leaders Group of Islands in the Pacific. We expect Eyes on the Seas to become operational in other areas in the coming months to help governments monitor fishing activities and provide retailers with a tool to help ensure supply chain transparency.

Those governments that utilize Eyes on the Seas will benefit from multiple layers of data, including information transmitted by VMS and AIS, lists of both authorized and known illegal vessels, oceanographic and environmental data, satellite imagery, and third-party surveillance that could originate from any person, ship, aircraft, or unmanned vehicle.

All of these data are compiled and prioritized using computer algorithms that recognize behaviors associated with fishing, so authorities quickly hone in on suspicious activity that warrants a closer look.

The ability to reliably track vessels is a necessary part of any realistic plan to end illegal fishing. Governments and industry must work together to put tracking systems in place and ensure the highest possible levels of compliance.

Coming next: Illegal fishing enforcement must focus on ports.