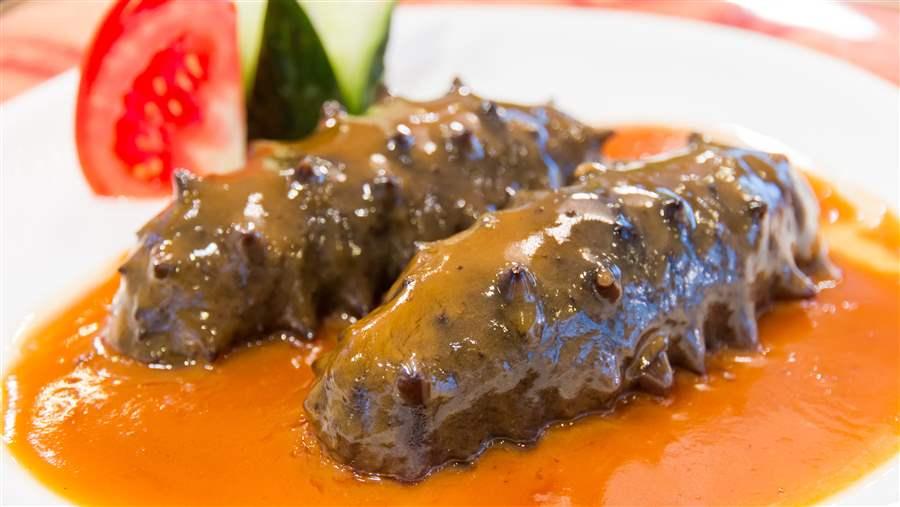 Sea cucumbers are a delicacy in Asian markets.

If it sounds like a sea cucumber should be a vegetable, don’t reach for your salad bowl.

Although shaped like our popular produce item, these wormlike creatures are found throughout the world’s oceans. They can grow from less than an inch to nearly 10 feet. They don’t have a brain; nerves guide them instead. And they boast a unique defensive system. Scare one and it will expel its internal organs through its anus. Enemies aren’t keen on getting slimed by the sticky and sometimes toxic body parts. For the cucumber, it’s no loss. Some can regrow their organs in as little as a week.

Sea cucumbers are a delicacy in Asian markets and prized for many uses, ranging from an aphrodisiac to a cure for joint pain. International demand has been increasing, and in many places around the world (such as the Red Sea, American Samoa, and Mexico) cucumber populations have plummeted from overfishing. In 2014, Florida limited fishermen to 200 per vessel per day after the booming demand in Asia led to four times as many being caught in 2013 (60,000 cucumbers) compared with previous years. 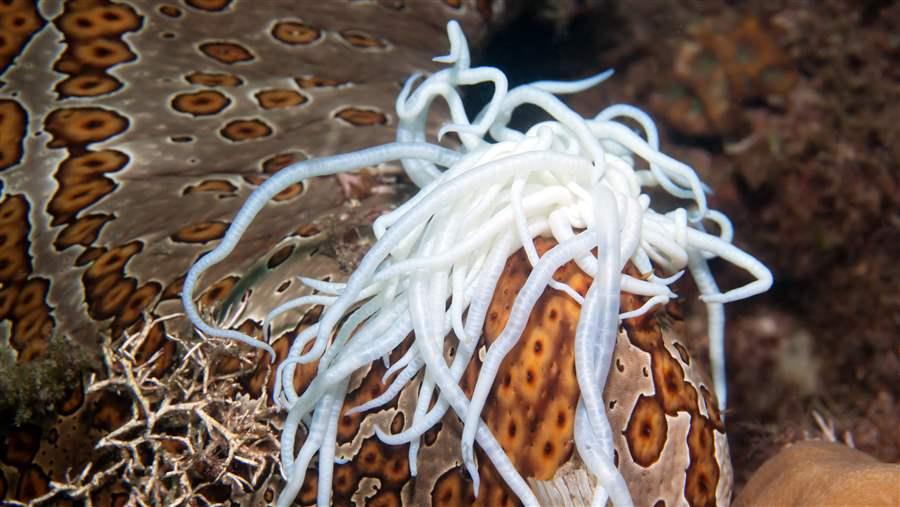 This sea cucumber is expelling its internal organs—a defensive technique used to scare off predators, which get slimed by the sticky and sometimes toxic body parts.

The Florida Fish and Wildlife Conservation Commission decided to act because it determined that the mostly sedentary sea cucumbers are vulnerable to overfishing but play a valuable role in keeping marine ecosystems functioning.

Sea cucumbers feed on a variety of tiny organisms such as algae, bacteria, plankton, bottom-dwelling animals, and decaying organic materials, which they gather with eight to 30 tubelike feet that look like tentacles surrounding their mouths. The sea cucumber’s digestion further breaks down these particles into even smaller pieces that return basic nutrients to the water. Thus, their feeding behavior recycles key organic elements for healthy tropical reefs and helps filter and aerate sediment on the seafloor. Consider them the earthworms of the sea.

Florida officials seized an opportunity to prevent a potential run on sea cucumbers, which could have had damaging repercussions for the marine ecosystem.

It’s an example of why the best way to protect U.S. ocean resources is to act proactively and proceed with caution when fishing efforts begin or expand. 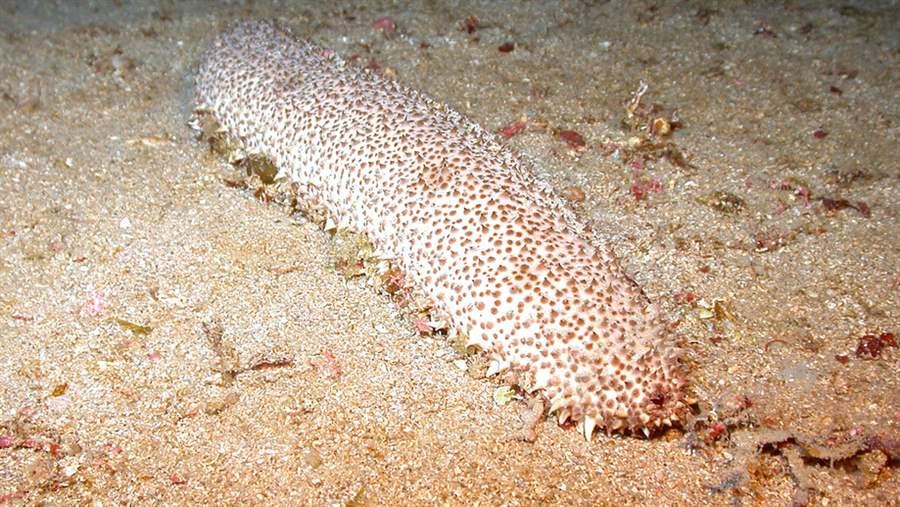 A sea cucumber at Flower Garden Banks National Marine Sanctuary in the Gulf of Mexico.

As Congress considers changes to the primary law that governs fishing in U.S. ocean waters, the Magnuson-Stevens Fishery Conservation and Management Act, it should consider how our ever-expanding knowledge and technologies can help us manage our resources with a big-picture approach. The act is approaching its 40th anniversary and could use an update. It’s time for a new focus in fisheries management. Learn more at www.pewtrusts.org/healthyoceans.