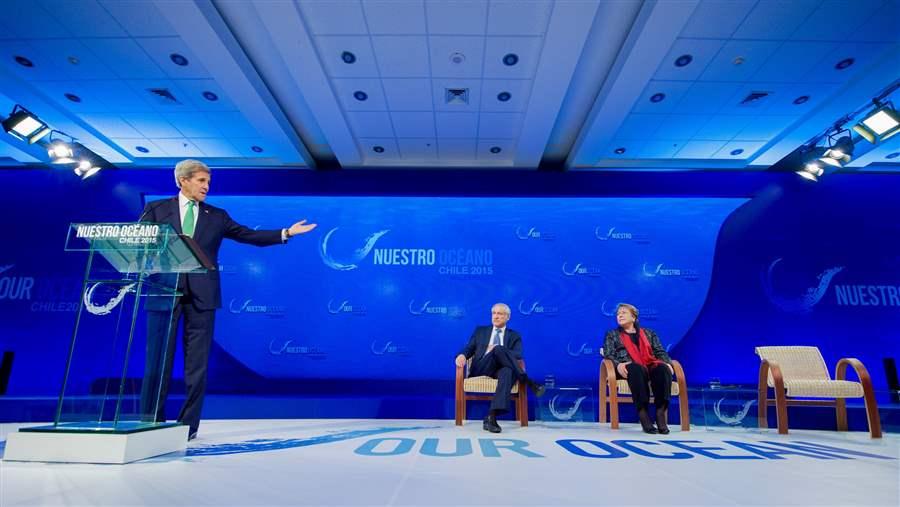 The fight against illegal fishing has become a critical and high-profile topic in the media and among policymakers. The week of Oct. 5, it was at the forefront of the agenda at the Our Ocean conference in Valparaiso, Chile. There, government representatives, industry leaders, and advocates from around the world gathered for important conversations about how best to protect the ocean from unsustainable activities.

Illegal, unreported, and unregulated (IUU) fishing is a challenge far greater than the profits, estimated at up to $23.5 billion a year, that criminals make trading in black market seafood. Coastal communities around the world rely on the ocean as a vital source of food and employment. The ocean, which covers 70 percent of the planet, provides plenty of cover for the bad actors who routinely bend the rules and break the law. There are hundreds of thousands of vessels capable of fishing anywhere; catching them in the act of fishing illegally is a monumental task.

The criminals who scour the seas for fish populations to poach exploit gaps in the patchy and inconsistent international response to this global problem. They, like the fish themselves, do not respect national boundaries. That means nations must work together to prevent illegal fishermen from taking advantage of widely disparate approaches to enforcement.

I had the opportunity to take part in this year’s Our Ocean conference and to see how nations are joining forces. In the year since the first conference in Washington last October, four countries ratified the Port State Measures Agreement (PSMA), the international treaty adopted by the U.N. Food and Agriculture Organization in 2009 to strengthen and harmonize port controls to stop illegally caught fish from entering the global market. So far, 13 governments have ratified the agreement; a total of 25 must do so for the PSMA to take effect. More ratifications are expected before the 2016 Our Ocean conference.

In recent weeks, Chile, New Zealand, and the United States have declared marine reserves covering 483,000 square miles of ocean. And consumers around the world are using their power to demand higher standards.

On Oct. 5, the United States announced plans to launch Sea Scout, a global tool that will put technology to work for fisheries enforcement. Separately, the European Union has put tremendous effort into working with member governments to fix systems that allow IUU fish to enter the market. All of this took leadership.

Continued leadership can transform all ports into fisheries enforcement centers, where authorities armed with a global standard have the tools to identify suspicious vessels, investigate when necessary, and take action when warranted. Every fish must pass through one of these ports to reach the market. Enforcement is far more cost-effective there than at sea.

Visionary leaders can build on cost-effective options for round-the-clock monitoring of national and international waters from any desktop around the world. They can move to implement mechanisms that allow for sharing information across international boundaries. We need these visionaries in all sectors—from government, civil society, and especially industry.

This week’s conference provided an important opportunity to remind those in positions of power that their leadership is urgently needed and for those who have already realized this to continue to lead the way. And they won’t be alone.

Pew will continue to advocate for countries to ratify the PSMA, for requirements that all fishing vessels have unique identification numbers, and for tracking these fishing vessels around the globe. Pew will continue to embrace the development of new technologies and advocate for equitable access to the data that port officials need to make the right decisions about vessels seeking to enter their ports.

Leadership has the power to turn our global conversation into action, culminating in the steps that help end illegal fishing and protect our oceans for generations to come.