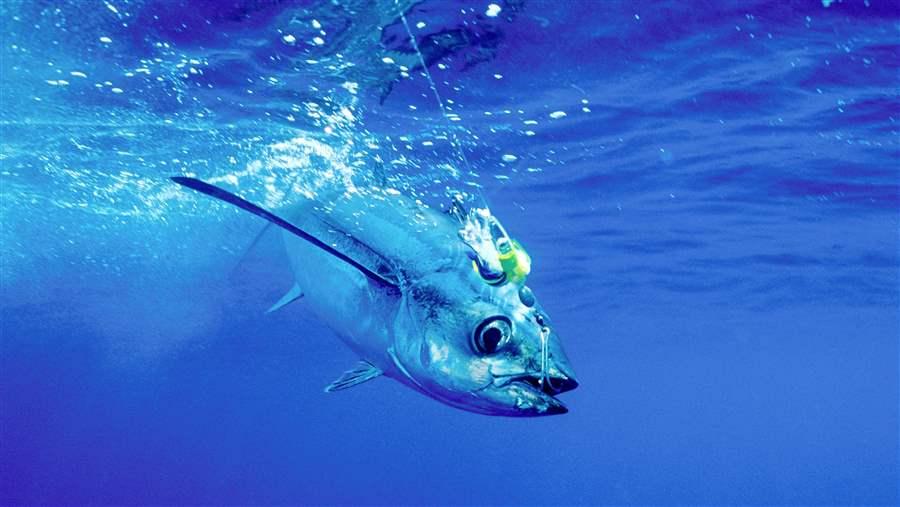 Nothing is quite as thrilling as hooking and landing a hard-fighting albacore tuna.

Northern Pacific albacore are small but mighty tuna. They make epic journeys every year, cruising between Japan and the United States. They’re fast, too. Their fins fold down into grooves on their sides, turning them into silver bullets that can easily reach 50 miles per hour.

These sleek fish are also eating machines, consuming one-quarter of their average 22-pound body weight every day. Eighty percent of their diet comes from little, oily forage fish such as sardines, sand lances, and sauries. That means, in essence, that people who consume albacore tuna also indirectly depend on sustainable forage fish populations.

Albacore and other ocean wildlife, including whales and seabirds, rely on protein-rich forage fish for their survival. But catching forage fish, even at a rate that under current law is not considered overfishing, could leave marine animals with an insufficient food supply. The importance of these small fish to healthy ocean ecosystems—and to fishing, seafood, and coastal tourism businesses—makes it critical that extra caution be used in their management.

Fortunately for albacore tuna, the Pacific Fishery Management Council is taking steps to leave enough forage fish in the water to support them—along with healthy populations of other predator species, including halibut and salmon, which congregate in feeding grounds off the U.S. West Coast.

The council has already declared its intent to protect a whole suite of currently unmanaged forage fish, including the Pacific saury, from future exploitation without a scientific assessment of the effect on predators. Those species aren’t yet being fished on the West Coast, so the council’s action is a sensible precautionary measure. Other important prey species, such as sardines and anchovies, have been targeted by fishermen for years. Traditional fishery management, however, does not ensure that enough forage fish are left in the water to feed their many predators.

To its credit, the Pacific council in April closed the West Coast sardine fishery when the estimated stock size fell below 150,000 tons, the council’s “cutoff” threshold, which stops directed commercial fishing and allows the population to rebuild. The collapse of sardines also adds urgency for the council to update a 20-year-old stock assessment for northern anchovies. The move would enable fisheries managers to determine the health of the anchovy population and ensure that enough of the species remains in the water to feed albacore, a highly migratory species that is also managed by the Western Pacific Regional Fishery Management Council.

Albacore tuna consume one-quarter of their body weight each day. And 80 percent of their diet comes from little, oily forage fish such as sardines, sand lances, and sauries.

Policymakers in Washington can also help conserve forage fish—and the larger marine animals that prey upon them—by modernizing the Magnuson-Stevens Fishery Conservation and Management Act, the primary law governing management of U.S. ocean fish. In the revisions, Congress should require all regional fishery management councils to establish science-based limits on how many forage fish can be caught each year and to account for the important role the small species play in feeding other ocean wildlife.

Currently, the regional councils that oversee U.S. ocean fisheries typically manage fish one species at a time—an approach that does not fully consider the important role played by forage fish. That type of management also fails to incorporate existing data on where fish—big or small—live, what they eat, what eats them, the impacts of pollution, and other threats, including overfishing and changing ocean conditions.

Ecosystem-based fishery management, by contrast, takes a comprehensive look at how climate change, overfishing, and other stressors affect fish and the larger marine ecosystems they call home. Congress should incorporate this broader, more science-based approach into law. Healthy oceans and fish, such as Pacific albacore, depend on it.