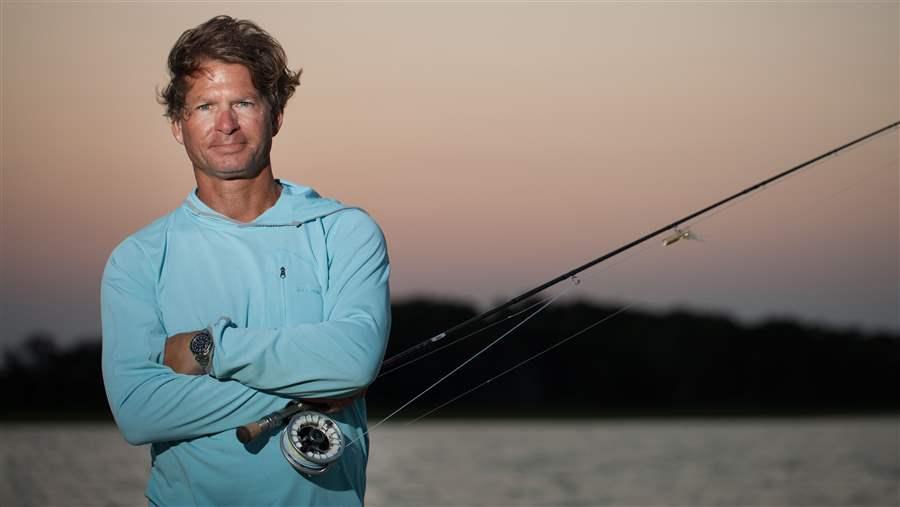 Captain David Blinken, a serious angler who knows the value of planning ahead.

Note: In the original version of this story, the collapse of the fish populations on Long Island's South Fork was erroneously stated as occurring in the 1980s. It occurred in the 1970s.

As a fly-fishing and light tackle guide based on Long Island, New York, Captain David Blinken always plans ahead. To choose the right gear, fishing spot, and timing for a trip, he checks the wind, water temperature, and tides. Blinken’s clients benefit from his experience, skills, and judgment, honed by years of working on the water.

Fishing guides aren’t the only ones who should think ahead and plan for a range of conditions on the water. To help ensure healthy oceans, the people who set policies for ocean fishing must consider not only the present state of a fishery but also the future, and must think beyond an individual fish species to the big picture of the marine ecosystem.

One helpful tool in doing that is a fishery ecosystem plan, which provides a road map for understanding the factors that influence fish in a given ecosystem. In creating these plans, scientists can collect and analyze information, ranging from upwelling currents and annual sea ice melt to the impacts of climate change and habitat degradation. That analysis can help regional fishery management councils recognize what may be helping or hurting a fishery; they can then use that information to make better decisions that, for instance, reduce the chance of fish populations crashing.

Blinken’s business of chasing striped bass, bluefish, and false albacore depends on a healthy, functioning ecosystem, year after year. He remembers as a child seeing huge schools of fish off Long Island’s South Fork, from Gardiner’s Bay to Montauk Point—and what happened when the fish populations plummeted in the 1970s.

“Striped bass within state waters were so depleted we needed a total moratorium on fishing to bring them back,” Blinken says. “If we plan well for the future, we shouldn’t have to face that with any fish population. We need to prevent fish stocks from getting depleted in the first place so we can avoid returning to crisis management. We need to learn the lessons of the past so we don’t keep making the same mistakes.”

Managers can use ecosystem plans, for instance, to protect the structure and function of the food web and ensure a healthy prey base. Plans could also include guidance on how to adapt management in the face of climate change impacts. By monitoring ecosystem indicators and considering a range of scenarios, the council could forecast trends, determine research and data needs, and identify risks before they become problems.

“We need to be proactive, to think two, three, 10 steps ahead,” Blinken says. “And we need to recognize that we can’t abuse one part of the system and think it won’t affect the rest. We have to think about the whole ecosystem.”

Some regional councils have already begun using fishery ecosystem plans to transition from a single-species approach to a more comprehensive one, but the law does not require that they undertake this kind of modern management. Congress has an opportunity to do right by fish and fishermen by updating the Magnuson-Stevens Fishery Conservation and Management Act, the primary law governing management of U.S. ocean fish, and calling for these regionally developed plans. Doing so can help reduce uncertainty for businesses such as Blinken’s that rely on consistently healthy oceans.

The Magnuson-Stevens Act is approaching its 40th anniversary and is overdue for an update. It’s time for a new focus in fisheries management. Learn more at pewtrusts.org/healthyoceans.