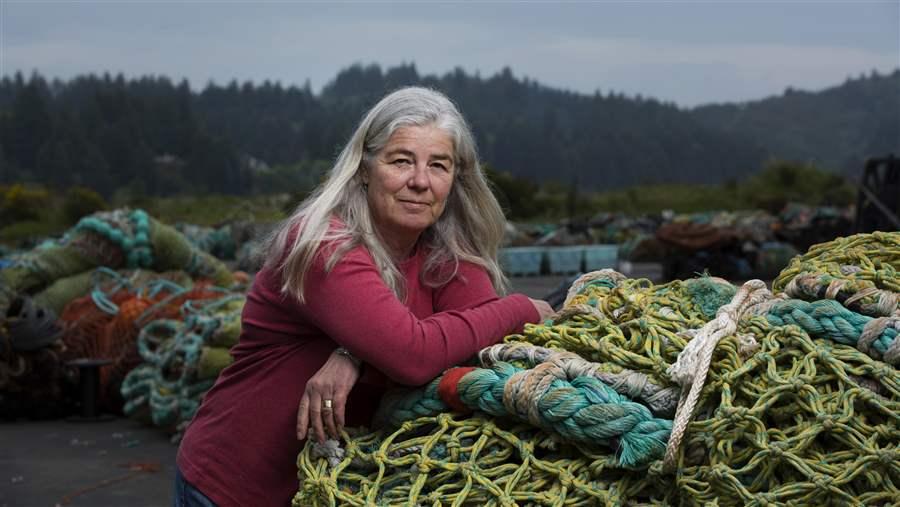 Sara Skamser of Newport, Oregon, works with fishermen and scientists to design and construct specialized fishing nets that catch the species fishermen want and leave the rest in the water where they belong.

In the late 1990s, the collapse of West Coast groundfish, which include more than 90 species of mostly bottom-dwelling fish, caused economic upheaval for communities up and down the Pacific Coast and led the federal government in 2000 to declare a disaster in the fishery. Yet, in a roundabout way, the rapid decline in groundfish numbers opened new opportunities for an entrepreneur with a product that helps reduce the waste of fish that are caught unintentionally.

Sara Skamser designs and constructs specialized fishing nets at Foulweather Trawl, the business she owns with her husband, John, a retired commercial fisherman in Newport, Oregon. Skamser works with fishermen and scientists to devise nets to do two things: catch the species fishermen want, and leave the rest in the water where they belong. “Sustainability is the name of the game,” she told us during a tour of her business.

Skamser’s nets are proving to be an important tool in the drive to reduce unwanted catch (often referred to as bycatch), which can also help keep fishermen in business. In response to the federal disaster declaration, regional fishery managers imposed tough new restrictions intended to rebuild fish populations. These included quotas for bycatch: Thus fishermen who caught too much of a nontarget fish—such as yelloweye or darkblotch rockfish—risked losing access to fishing grounds, at least temporarily. If fishermen wanted to stay in business, Skamser said, “they had to be more careful, and they had to start working together.” Skamser, a Wisconsin native who came to the Oregon coast in the late 1970s looking for work as a trained welder, found that she had a knack for connecting with commercial fishermen.

Working directly with fishermen and tapping their knowledge about how fish behave, she and John began to design net “excluders.” Standing in her shop recently at the Port of Newport, Skamser pointed out one colorful net that includes two compartments: A lower section forms a funnel that traps valuable groundfish called Pacific whiting, also known as hake, and an upper compartment includes a “window” that allows stronger-swimming salmon to escape unharmed. Skamser said fishermen have gradually come around to embracing the technology.

“It has been a learning curve for the guys to change how they think,” she said. “But they want to have fish in the ocean. They began to see in the ‘90s that they were not getting the fish—that the resource [they needed] wasn’t there.”

Reducing bycatch not only conserves the resource for fishermen and coastal communities over the long term, but it can also pay big dividends right now: In 2013, scientists with the National Oceanic and Atmospheric Administration estimated that fish discarded due to size or species restrictions cost fishermen $427 million annually in lost sales nationwide.

Indiscriminate fishing that results in high levels of bycatch also puts additional pressure on depleted species, hindering their recovery. That’s why sharpening provisions to minimize unintentional waste should be a central goal of the Magnuson-Stevens Fishery Conservation and Management Act, the primary law governing fishing in U.S. ocean waters. Congress, which reauthorizes the act periodically and is set to do so again in 2016, is considering revising the law as part of that reauthorization.

As Skamser can attest, many fishermen embrace the challenge of reducing bycatch and fishing more efficiently. “They look at it as their problem, too—not just the government’s,” she said. “Foulweather Trawl isn’t going to solve the bycatch problem. We’re just trying to build a better mousetrap. The fishermen have to be engaged.”