I enjoy just about everything about summer. For me, getting out on the Pacific Ocean waters near my home to fish for salmon is as good as it gets. For some of my friends, taking in a baseball game on a warm afternoon at a ballpark is the perfect day.

Come to think of it, summer fun often depends on baseballs and baitballs.

A bait ball is one of the most remarkable sights in nature: Tiny schooling fish—commonly known as forage fish—form tight concentric circles as a defensive measure against predators attacking from all sides. The sphere is in constant motion as the fish rise, fall, and circle, often in mesmerizing unison. 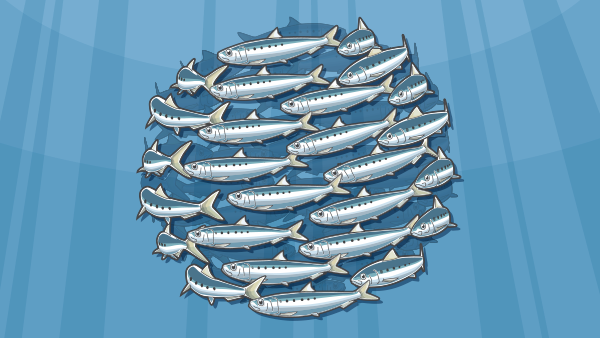 The tactic is not always successful. Seabirds, marine mammals, and bigger fish such as salmon and tuna dart into the baitball, seeking—and often getting—a meal.

Feeding others is one of the critical roles that forage fish play in the marine ecosystem: They eat tiny plants and animals known as plankton and in turn become a food source that nourishes a vast array of other species. That’s why we need to keep a healthy roster of baitball players year-round—a goal that is increasingly in jeopardy as large-scale fisheries target forage fish around the world. About 90 percent of that catch is ground up to produce fish oil or to make meal to feed farmed fish, according to a seminal 2012 report by the Lenfest Forage Fish Task Force.

The fishing community also recognizes that the health of our oceans relies on responsibly managed forage fish populations. Bob Rees, a professional fishing guide and executive director of the Association of Northwest Steelheaders, and Paul Engelmeyer of the Audubon Society of Portland recently co-authored an op-ed stating that it’s time to “bring major league baitball to Oregon” to help ensure sufficient food for the seabirds that people love to watch, and for the bigger fish that many of us enjoy catching and eating.

Rees and Engelmeyer called for Oregon to adopt precautionary measures to protect unmanaged forage fish in state waters within three miles of shore. Such an action would complement March’s landmark decision by the Pacific Fishery Management Council that sets a similar conservation policy for forage fish in the federal exclusive economic zone, three to 200 miles off the U.S. West Coast.

Pew supports Oregon’s efforts to conserve forage fish, and we also believe it’s time for California to do the same. Washington state already has a strong plan in place, so action by Oregon and California would ensure basic protections for forage fish along the entire West Coast.

Officials in those states can notch a walk-off win by protecting the little fish that support the big-league marine ecosystem. Here’s hoping they keep their eye on the ball and hit a home run. After all, these little fish are a big deal.

Learn more about what&rsquo;s being done to bring big league baitball to the West Coast at&nbsp;www.pewtrusts.org/baitball.

Learn more about what&rsquo;s being done to bring big league baitball to the West Coast at&nbsp;www.pewtrusts.org/baitball.