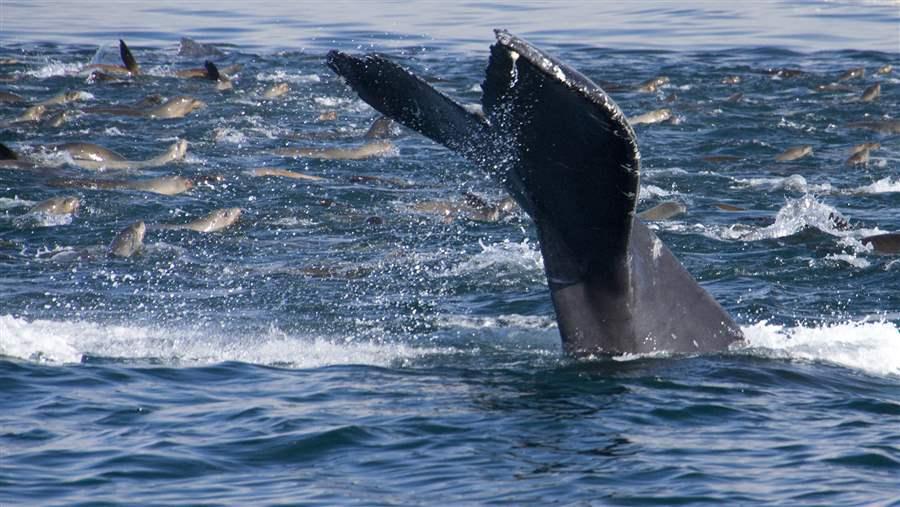 Without a doubt, this is a great day for everyone who has a stake in a healthy ocean. West Coast fishery leaders acted March 10 to protect numerous species of forage fish because of the critical role they play in the marine food web.

The Pacific Fishery Management Council, meeting in Vancouver, Washington, agreed to forestall commercial fishing on seven broad groups of forage fish that aren’t yet targeted. The decision means that fishing on these prey species won’t be allowed unless and until the council determines, through a scientific assessment, that any proposed forage fishery won’t harm existing fisheries for predator fish such as salmon or the overall marine ecosystem.

This landmark development recognizes the ecological importance of forage fish to seabirds, marine mammals, and the bigger fish many of us love to catch and eat. It also completes the first initiative of the council’s Fishery Ecosystem Plan, a visionary document adopted unanimously almost two years ago.

The council, and everyone involved, should be proud of this achievement. It marks a fundamental change from traditional management of ocean fishing to a more comprehensive approach. It also cements the principle that responsible management requires asking questions before a fishery begins, rather than after.

The demand for forage fish increases every year and now accounts for more than a third of all marine fish landings globally. About 90 percent are turned into fishmeal or oil. An advisory committee told the council in 2011 that the “spectacular growth” of the global aquaculture industry had raised the possibility of new fisheries for forage fish developing on the West Coast. Separately, the Lenfest Forage Fish Task Force, a group of 13 eminent scientists from around the world, recommended in 2012 that no new fisheries be initiated on forage species when we have little information about their population health, their migration patterns, or the degree to which predators depend on them for food.

The forage fish that will now be protected serve as prey for economically important species of finfish, including salmon; groundfish such as halibut and lingcod; highly migratory species such as  tuna; and open-water fish such as mackerel. To protect the prey base for these valuable species, seven broad groups of forage species will be folded into each of the council‘s existing fishery management plans. That means basic conservation measures will be established to prevent development of new commercial fishing for these forage fish species until the council has a chance to assess the effect on the rest of the food web.

Species to be protected are round and thread herring, lanternfish, sand lance, saury, silverside, smelt, and several types of squid. Now that the council has taken final action, the National Oceanic and Atmospheric Administration’s Fisheries Service must promulgate regulations to give the decision the force of law. Enacting those regulations could take six months to a year.

The decision this week culminates four years of research and public participation, including tens of thousands of comments sent to the council. The proposal earned support from a broad cross section of stakeholders, including recreational and commercial fishermen, as well as organizations advocating for conservation, ecotourism businesses, and restaurants. In fact, fishery managers have described the broad base of support on this issue as unprecedented.

Taking this action earned public support because it’s justified based on the science and because it makes sense. Council members deserve credit for acting with foresight to protect a healthy ocean for generations to come.