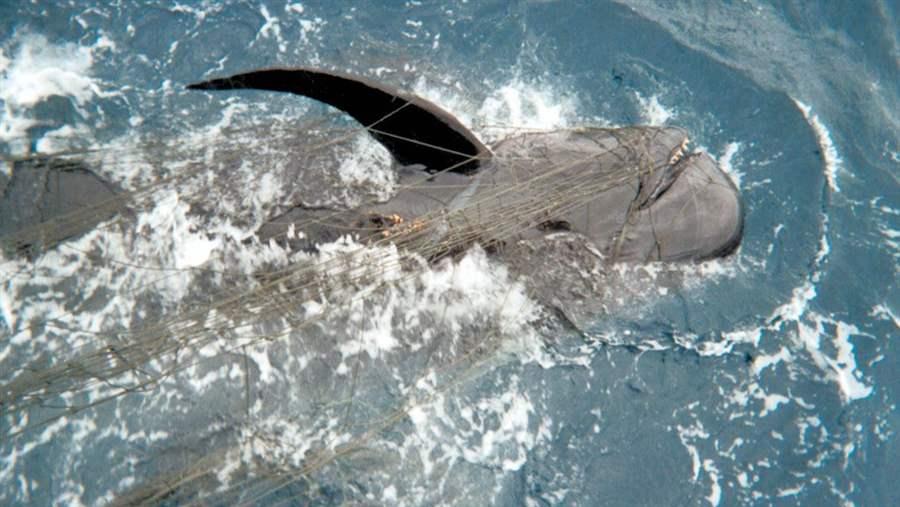 Some argue that killing mammals in U.S. waters, such as this pilot whale entangled in a drift gillnet used to target swordfish off California, is better than importing seafood from even deadlier foreign fisheries. But this is faulty logic.

Supporters of California’s drift gillnet fishery for swordfish are quick to say their fishery is better than the alternative. That alternative, they say, is to buy swordfish from foreign markets that have an even worse record when it comes to damaging effects on nontarget marine life. However, this is faulty logic.

At issue is something called the “transfer effect,” which implies that if drift gillnets are phased out on the U.S. West Coast, our demand for swordfish will be met overseas, where foreign fishermen kill marine mammals and sea turtles with little, if any, oversight.

Undeniably, there are countries around the world with less regulation than ours. However that doesn’t mean we should turn a blind eye toward our own damaging practices. Federal and regional fishery managers should work in tandem to ensure that consumers can buy fish that are caught responsibly.

Here on the West Coast, regardless of any weak foreign standards, our regional fishery managers can transition the swordfish fishery away from drift gillnets toward better options, such as deep-set buoy gear. Research shows this new and selective method of catching swordfish on the West Coast can provide this luxury seafood without killing a high level of marine mammals as bycatch in drift gillnets.

At the federal level, two laws can be used to ensure that U.S. standards are met. The Magnuson-Stevens Fishery Conservation and Management Act, the primary law governing fishing in U.S. oceans, requires that imported seafood complies with our standards for fisheries. It gives the United States the authority to impose trade sanctions, deny port privileges, or enact other punitive regulations to protect ocean wildlife.

The Obama administration is making headway in this area. For example, U.S. regulators are conducting an assessment of the Mexican halibut fishery due to its entanglement and killing of imperiled loggerhead sea turtles in fishing nets. This is the first time this provision of the Magnuson-Stevens Act has been invoked since the law was updated in 2006.

Similarly, for over 40 years, the Marine Mammal Protection Act has required that seafood imports comply with U.S. standards for the unintended catch of marine mammals such as dolphins and whales. Unfortunately, that law has not been properly enforced. A lawsuit brought by three environmental groups recently resulted in a settlement that requires the U.S. to ban the import of seafood that results in killing more marine mammals than would be allowed under American law. When fully enforced, this would prohibit damaging foreign fisheries from having access to the American market.

Lax management standards for fisheries outside the U.S. should never be used as an excuse to lower the bar at home. Fishery managers do not need to choose between improving fishing practices in our own waters and imposing stricter standards on imported fish. They can do both. So rather than hide behind the transfer effect argument, let’s move forward with phasing out the use of indiscriminate drift gillnets to catch swordfish off the West Coast and enforce the laws that keep irresponsibly caught foreign fish out of U.S. markets.