Virginia’s Shenandoah Mountain, spanning some 90,000 acres in the George Washington National Forest, includes one of the largest remaining roadless areas in the southern Appalachian Mountains. With 10 named peaks that rise above 4,000 feet, its forested ridgeline serves as the western backdrop to the Shenandoah Valley.

Identified as the state’s largest, least fragmented natural area by the Virginia Department of Conservation and Recreation’s Natural Heritage Program, Shenandoah Mountain is home to a diverse array of species, from black bears and white-tailed deer to Jefferson salamanders and red-backed salamanders. The cow knob salamander, found nowhere else on Earth, also lives there. 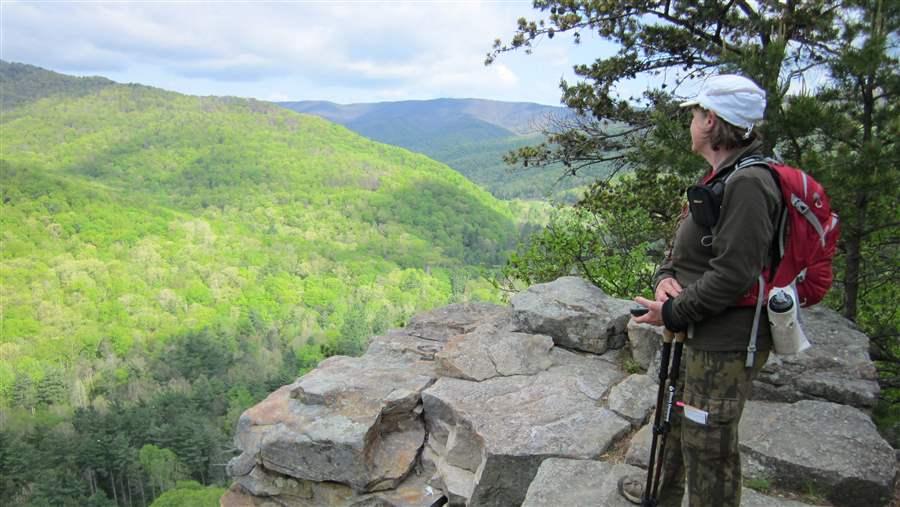 The area’s remoteness and perennial springs give rise to clean, cool streams that eventually feed into the James, Shenandoah, and Potomac rivers, which together provide drinking water for nearly 4 million residents downstream. Some of these streams also fill reservoirs for the Shenandoah Valley cities of Harrisonburg and Staunton.

Visitors come to the region to hike, camp, bird-watch, hunt, fish, and mountain bike. Numerous trails provide access to rugged ridges, narrow hollows, and native trout streams, with the Wild Oak National Recreation Trail and Shenandoah Mountain Trail topping the list of a network of trails extending 150-miles. Backpackers can walk for several days without crossing a road, according to the Friends of Shenandoah Mountain—a rare opportunity in the eastern United States.

To protect Shenandoah Mountain’s natural beauty and wealth of plants and animals, conservationists, mountain bikers, local public officials, timber interests, and hunters and anglers are working as the George Washington Stakeholders Collaborative in a joint effort to maintain the region’s wildness and its associated benefits, such as outstanding recreation opportunities and providing clean drinking water to downstream communities. This cooperation has yielded positive results. In November 2014, the U.S. Forest Service embraced the group’s proposal for a 90,000-acre Shenandoah Mountain national scenic area (NSA) with wilderness in the official forest plan for the George Washington National Forest. The Forest Service adopted the group’s recommendation for one new wilderness, Little River, and an addition to the existing Ramsey’s Draft Wilderness. Two areas that the collaborative has identified for wilderness designation—Skidmore Fork and Lynn Hollow—were not recommended by the Forest Service. However, the group is working to make sure they are included in any legislative proposal to permanently protect Shenandoah Mountain.

For more information on the proposal, please visit www.friendsofshenandoahmountain.org.