Update (Aug. 5, 2015): The EPA released its final Clean Power Plan on Monday, Aug. 3, setting carbon-reduction goals for states. The plan lists multiple options for states seeking to meet those requirements, including combined heat and power and waste heat to power—the renewable-energy technologies covered in the analysis below.

The U.S. Environmental Protection Agency is expected to release its final Clean Power Plan next week, and we are hopeful that the rule will embrace industrial energy efficiency technologies, such as combined heat and power (CHP) and waste heat to power (WHP), to help states meet carbon-reduction goals. These cost-effective tools can decrease emissions, increase electric grid reliability, and lower energy expenses for businesses, enabling them to better compete in a global economy. In fact, facilities equipped with CHP systems have a record of providing off-grid power during major disruptions and are important components of resiliency plans for critical infrastructure.

The goal of the draft rule, issued in June 2014, is to reduce carbon dioxide emissions from existing power plants by 30 percent from 2005 levels by 2030. The proposed Clean Power Plan has two key parts. First, it sets state-specific carbon-reduction targets and deadlines, based on each state’s energy mix. Second, the plan outlines four strategies states can use independently or in combination to reach pollution targets: make power plants more efficient; deploy lower-emitting power sources; harness clean energy sources; and use electricity more efficiently throughout the residential, commercial, and industrial sectors.

In response to the draft rule, we commissioned ICF International Inc. to analyze the potential impact of the Clean Power Plan on future deployment of CHP and WHP compared with business as usual. Under a model in which the rule includes allowing CHP and WHP technologies to contribute without restriction to meeting the identified state emissions reduction goals, ICF projects that an additional 24 gigawatts—17 GW of CHP and 7 GW of WHP—of industrial energy efficiency would be deployed by 2030. This new capacity, an increase of 33 percent over today, would be equivalent to the electricity used annually by roughly 12 million homes.1 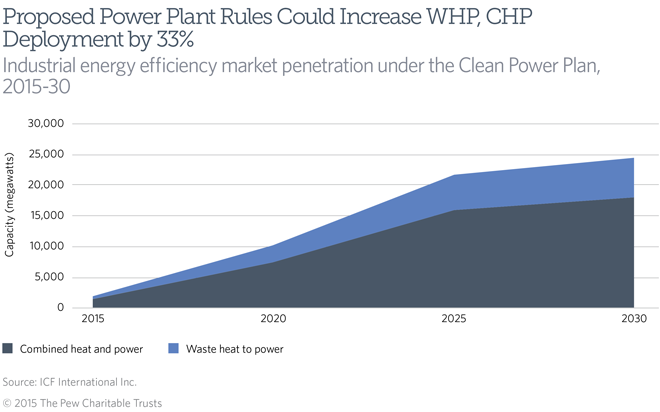 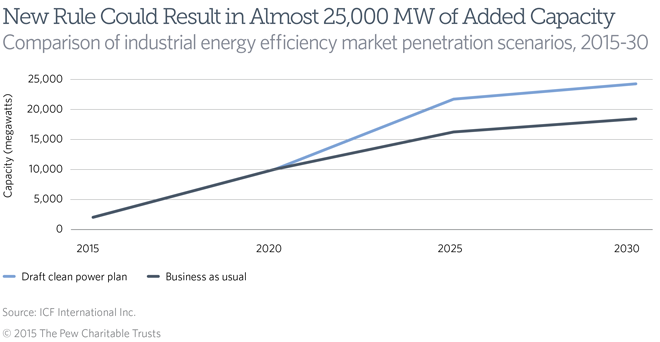 The analysis also found that the Clean Power Plan would affect CHP and WHP deployment differently across the states. According to ICF’s modeling, Texas would see the most increased capacity at over 1 GW, followed by Tennessee, Wisconsin, Michigan, and Louisiana. Wyoming, Utah, Virginia, Minnesota, and Alabama would round out the top 10. 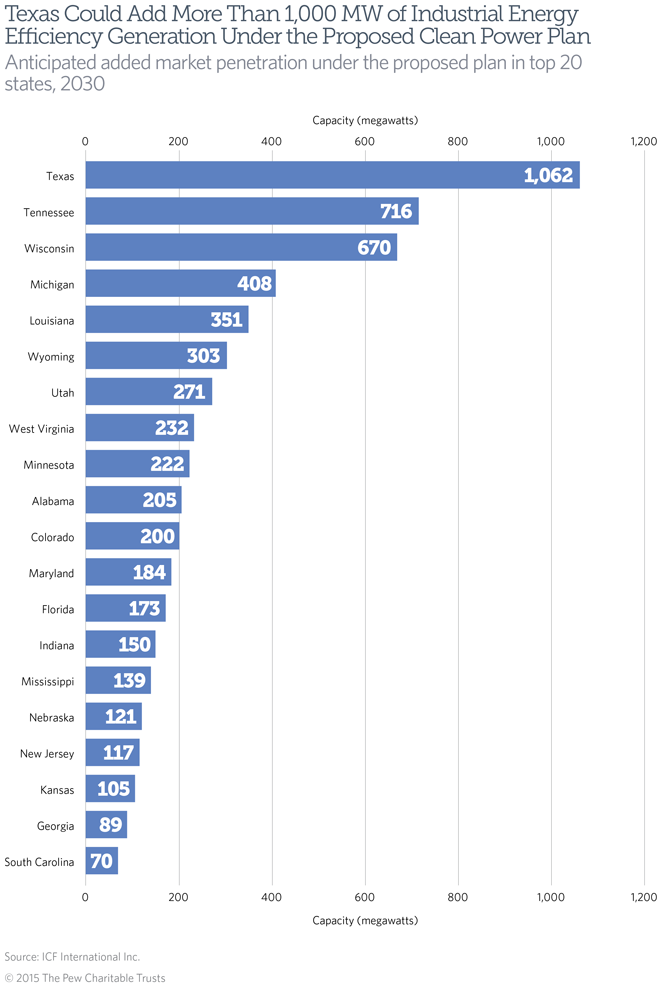 Industrial energy efficiency technologies can help states achieve their emission-reduction goals and increase electrical generation efficiency. CHP systems capture waste heat from manufacturing and other industrial processes and use it to generate electricity or to heat or cool nearby buildings, providing significant efficiency benefits, cost savings, and reduced emissions. These units provide reliable electricity or mechanical power plus thermal energy from a single fuel source. WHP uses heat released during industrial processes to generate electricity with no additional combustion or pollution. Facilities employing CHP or WHP can use the produced energy and/or heat or sell it to the grid.

Across the country, power-dependent industries are taking advantage of these proven technologies. Today, 83 GW of CHP and 766 MW of WHP are deployed at more than 4,300 facilities in the U.S.2 More than 80 percent of this capacity is used by energy-intensive operations in the industrial sector, with the balance deployed at commercial sites and institutions. A recent study estimates the United States has the technical potential for 126 GW of additional CHP capacity—60 GW to be deployed in the industrial sector and 66 GW in the commercial sector.3 Another 15 GW of WHP potential exists, much of it in the oil and gas sector.4 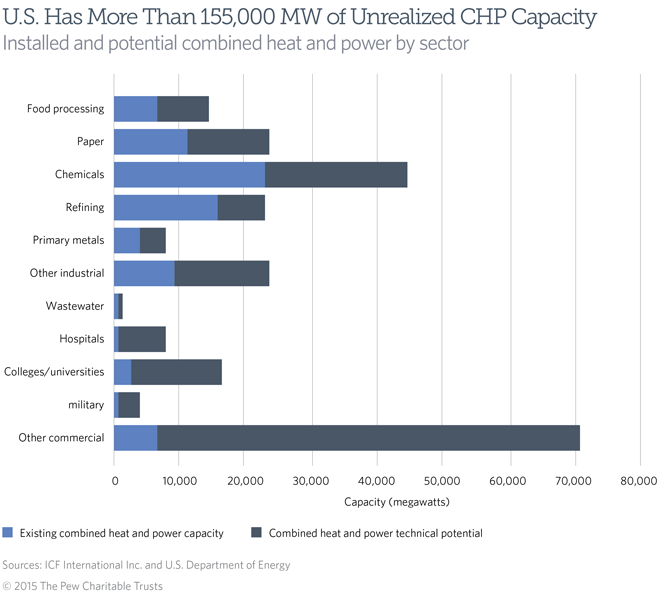 Onsite technologies allow businesses to achieve energy efficiencies of up to 80 percent. Inclusion of CHP and WHP in the Clean Power Plan as eligible approaches to meet state goals would offer great promise for the expanded deployment of these highly efficient systems in the coming years.