Nationally, total state tax revenue continued its recovery from the Great Recession, ending 2014 at its highest level ever. But the state-by-state picture is far more mixed. Adjusted for inflation, tax receipts in 27 states had not fully rebounded by the fourth quarter of 2014.

Overall, states collected 3.5 percent more tax revenue in the fourth quarter of 2014 than they did in the third quarter of 2008, just before receipts plummeted midway through the recession, after accounting for inflation and seasonal fluctuations. It was the seventh straight quarter that 50-state tax revenue exceeded its 2008 peak.

This means that for every $1 of purchasing power states derived from tax receipts at the 2008 peak, they collectively had 3.5 cents more, based on collections at the end of 2014, up from 2.4 cents in the previous quarter.

But the 50-state total masks how unevenly revenue is recovering. Five-and-a-half years after the recession’s end, 27 states were still collecting less in real terms than at their individual peaks before or during the recession. In eight states, tax revenue was down 10 percent or more from those peaks.

Tax revenue trends reflect economic changes as well as the effects of tax policy decisions. For example, tax revenue has recovered in states such as California, Illinois, and Minnesota that raised taxes after the recession. Collections remain below their previous peak in states such as Florida, Kansas, North Carolina, and Wisconsin, which cut taxes or fees since the recession. 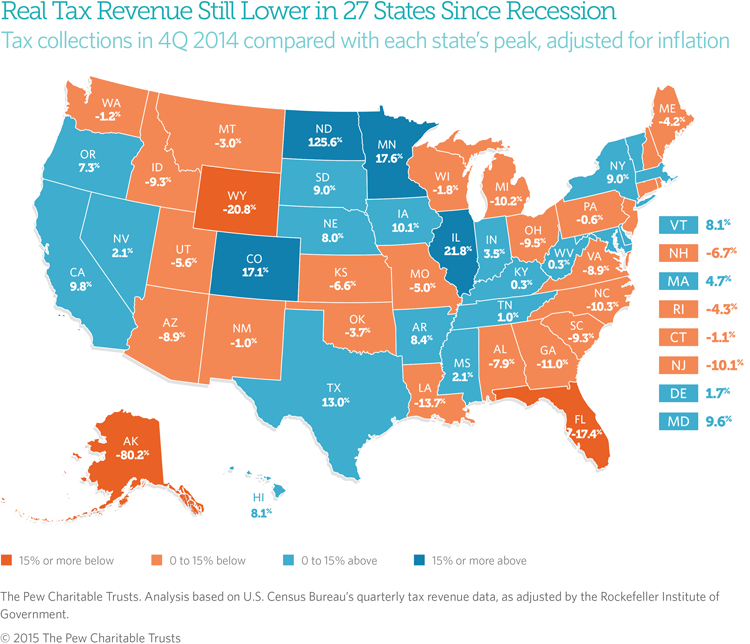 A comparison of each state’s tax receipts in the fourth quarter of 2014 with its peak quarter of revenue before the end of the recession, averaged across four quarters and adjusted for inflation, shows:

Total 50-state tax revenue has hovered above its 2008 high mark—even though most states had below-peak receipts—largely because of the recovery of collections in four states with large tax bases: California, Illinois, New York, and Texas. If those states were excluded, overall tax revenue would fall short of its 2008 level.

Looking ahead, state tax revenue is expected to continue growing. Preliminary figures for January through March 2015 show increases in nationwide estimates of personal, sales, and total tax revenue, according to the Nelson A. Rockefeller Institute of Government. Beyond that, most states were reporting higher-than-forecast receipts for April, when the majority of taxpayers filed their returns, according to the National Association of State Budget Officers.

As states regain fiscal ground lost in the recession, policymakers face pressure to catch up on investments and spending that were postponed because of the downturn. That may be more difficult in states where tax revenue remains below its previous peak. But even a return to peak levels can leave states with little extra to make up for cuts in federal aid or to pay for costs associated with population increases, growth in Medicaid enrollment, deferred needs, and accumulated debts.

Without adjusting for inflation, 50-state quarterly tax revenue was 13.4 percent above peak, and tax collections had recovered in 44 states as of the fourth quarter of 2014. Unadjusted figures do not take into account changes in the price of goods and services.

Download the data to see individual state trends from the first quarter of 2006 to the fourth quarter of 2014. Visit The Pew Charitable Trusts’ interactive resource Fiscal 50: State Trends and Analysis to sort and analyze data for other indicators of state fiscal health.