In March, Lewis Pugh set a world record for the most southerly swim ever documented when he swam 350 meters (1,150 feet) of frigid water in the Bay of Whales in Antarctica’s Ross Sea, wearing only a Speedo swimsuit. Pugh, the United Nations Environment Programme’s Patron for Oceans, is known for his daring swims, including in the seven ancient seas and the Arctic Ocean, but this one was by far the most dangerous, remote, and difficult. Pugh’s effort, in what he called "the most terrifying place I’d ever swum," was for a cause: to draw attention to the need to protect what is often called "the last ocean."

The Ross Sea is teeming with life, some of which is found nowhere else. Penguins, leopard seals, and Antarctic krill thrive in its near-pristine waters. Unfortunately, the Commission for the Conservation of Antarctic Marine Living Resources (CCAMLR), which is responsible for protecting the Southern Ocean, has failed four times in the past three years to create a marine reserve in the Ross Sea, largely because of objections from Russia and China. Such a reserve would keep the region off-limits to fishing and other development.

On April 28, Pugh continued spreading the word about Antarctic marine protections with a visit to the U.N. and the opening of a photo exhibit there highlighting images from his travels in the Southern Ocean.

The event, "Breaking the Ice," gave U.N. delegates, CCAMLR representatives, and decision-makers with a stake in the health of our oceans, a chance to hear why Antarctic protections are so critical. Attendees at the exhibit, sponsored by The Pew Charitable Trusts and the U.S. mission to the U.N., heard remarks from Ambassador Richard Erdman of the U.S. mission; Joshua Reichert, a Pew executive vice president; Catherine A. Novelli, U.S. undersecretary of state for economic growth, energy, and the environment; and Pugh.

Pugh described the unspoiled environment in the Ross Sea and his intention to spur CCAMLR members to find agreement on how best to protect those waters. “When I took on my swims, I hoped a symbolic act might unite them,’’ he said.

"Half a century ago, at the height of the Cold War, 12 countries joined together to protect Antarctica from the exploitation of its resources by signing the Antarctic Treaty, which protects Antarctica as a place of peace and science," Reichert said. "Unfortunately, while the treaty protects the land of the seventh continent, it does not afford the same protection to the ocean surrounding it."

As climate change and fishing pressures increase, the need to protect large-scale, intact ecosystems grows more important. The Southern Ocean is one of the few remaining places where such protections could prevent overfishing and other negative human impacts.

"The Ross Sea is one of the last great ocean wilderness areas left on Earth," said Undersecretary Novelli. "All countries can be heroes in the fight to protect this special place."

View photos from Pugh's swim and the event 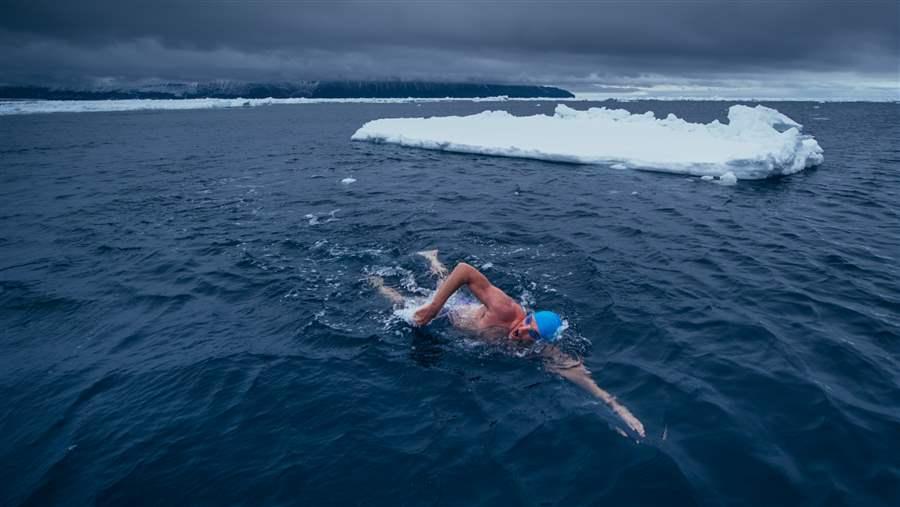 Surrounded by ice, Lewis Pugh swims in the Bay of Whales in the Ross Sea. 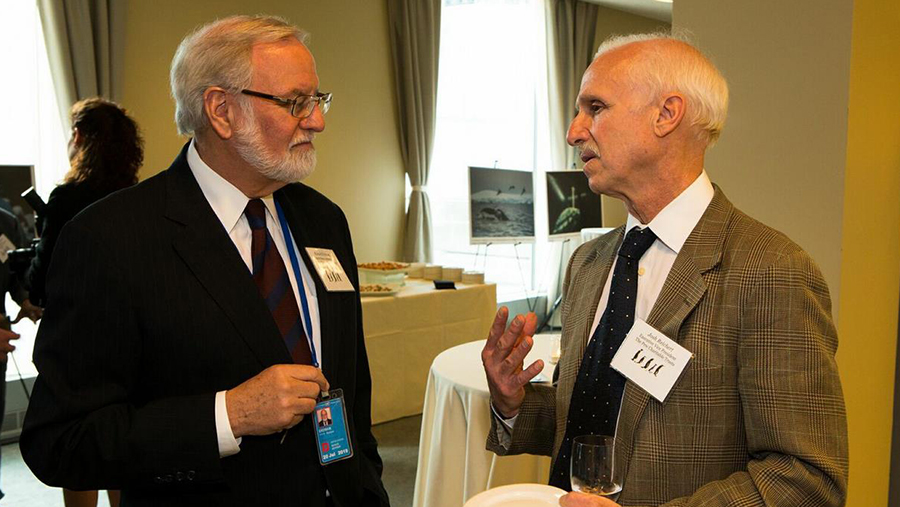 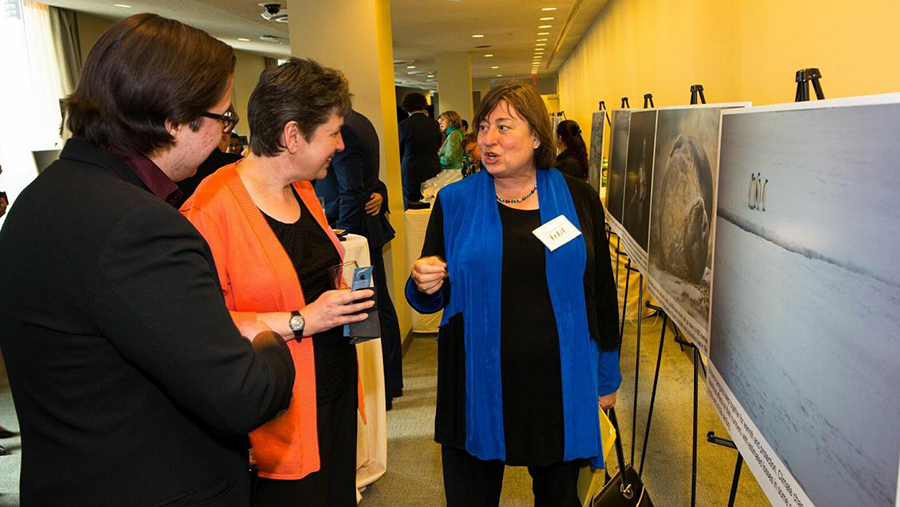 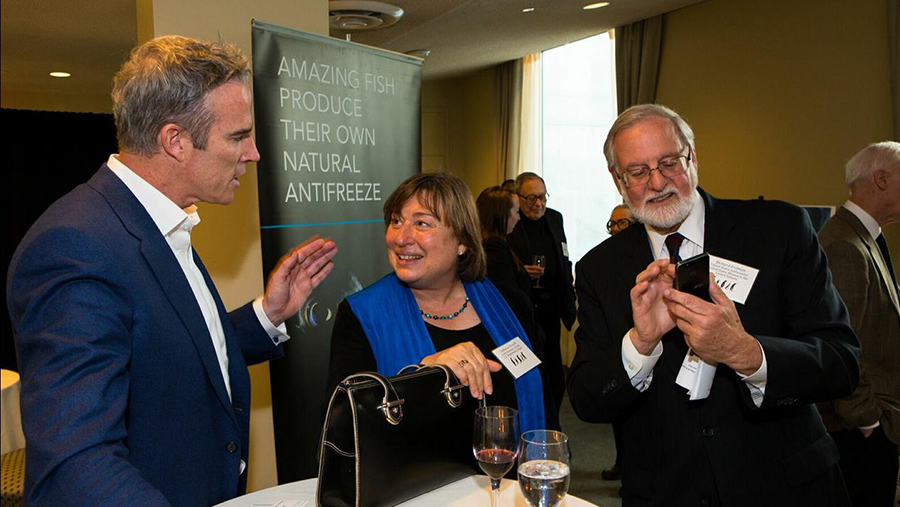 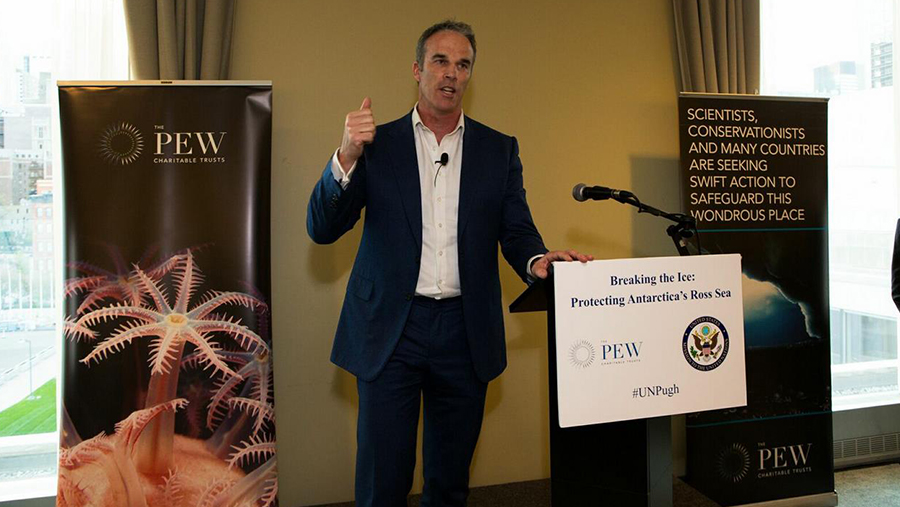 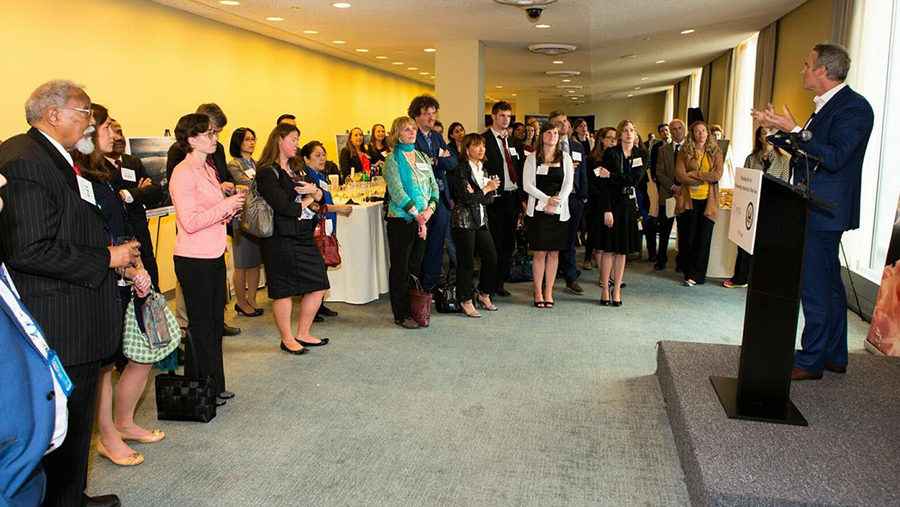 The audience listens to Pugh’s remarks on the need for Antarctic marine protections. 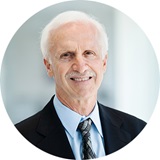