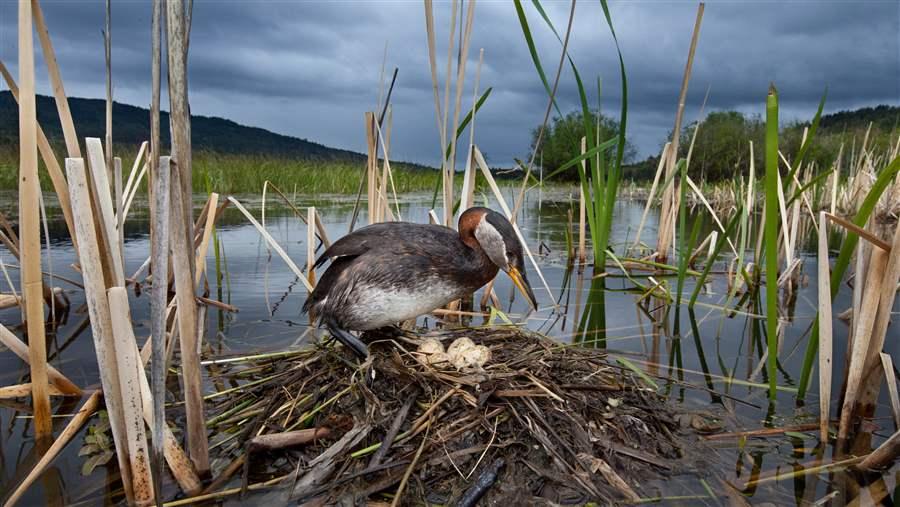 For as long as we human beings can remember, we've been looking up. Over our heads went the birds—free as we were not, singing as we tried to.Margaret Atwood

For billions of migratory birds, spring is the season of flight, of journeys that begin with the fresh promise of renewal.

Others—such as the tiny blackpoll warbler or the Hudsonian godwit shorebird—take a longer and lonelier path from winter homes as far away as Central and South America. Often out of sight, these avian endurance champions fly high over the Gulf of Mexico or the Caribbean Sea on their long trips north.

Whatever flyway they follow, the destination is often the same—the boreal forest. The vast boreal region, stretching from Alaska and across Canada from the Yukon to Newfoundland and Labrador, has been aptly dubbed North America’s bird nursery.

Each spring, 1 billion to 3 billion birds wing their way to the boreal. After a successful breeding season, as many as 3 billion to 5 billion make return trips south.

This northern forest plays a crucial role in sustaining healthy bird populations throughout North, Central and South America. Its importance as a refuge and breeding ground for birds is among the many reasons The Pew Charitable Trusts has been working since 2000 to conserve 1 billion acres of boreal forest in Canada.

To mark International Migratory Bird Day on May 9, Pew is supporting the Boreal Birds Need Half campaign, an important new effort to build broader support for protecting 50 percent of the region from industrial development.

The campaign was launched in March by the Boreal Songbird Initiative and Ducks Unlimited, partners with Pew in the International Boreal Conservation Campaign. Organizers aim to enlist support from individuals, conservation groups, and businesses in Canada and the United States.

In a 2014 science report, the two organizations recommended that at least half the boreal forest remain free of large-scale industrial disturbance and that leading-edge, sustainable development principles be applied on the remainder. The Boreal Birds Need Half campaign also recommends that any protections and development proceed only with the “free, prior, and informed consent” of Indigenous communities.

“Modern conservation science shows that protecting at least 50 percent of the boreal forest is necessary to preserve the ecological health of the forest and its biodiversity,” said Jeff Wells, Ph.D., who is science director for the Boreal Songbird Initiative and an adviser to Pew.

“The importance of boreal forest habitat for birds will only increase in the future because climate change has already begun pushing bird ranges farther north. The boreal forest will be an important refuge—a ‘Noah’s Ark’ for birds,” Wells added.

In all, more than 300 bird species rely on the boreal forest for nesting or migratory stopover habitat. Nearly 100 species are particularly reliant on the boreal, with the region serving as the breeding grounds for more than 50 percent of their populations.

Here are seven species that need a healthy, intact boreal forest for their survival: 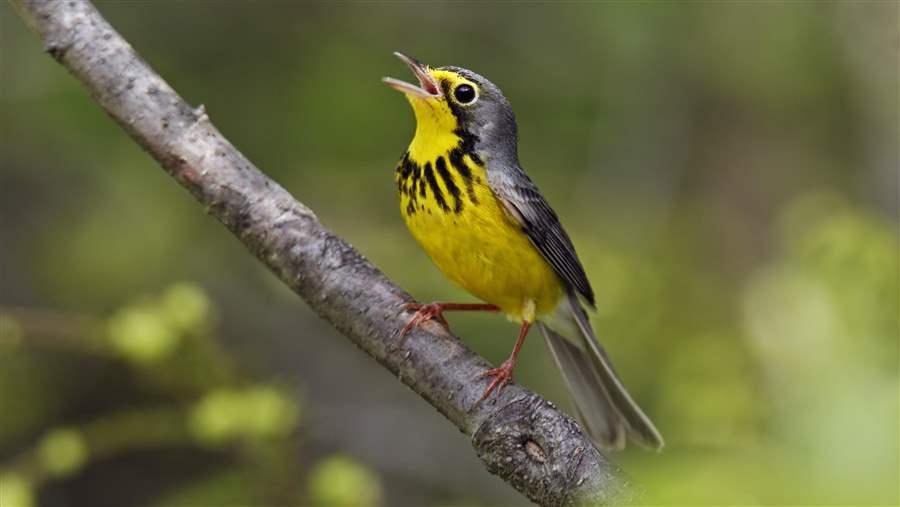 The threatened Canada warbler has suffered an 80 percent population decline in recent decades.

With its steel blue back and bright yellow breast overlaid with a necklace of black stripes, the Canada warbler has a striking appearance that makes it a favorite among birders. But this iconic species is in trouble: It has lost more than 80 percent of its population over the last four decades and faces threats from forestry, mining exploration, and conversion of breeding habitat to urban or agricultural use. It is listed as threatened under Canada’s Species at Risk Act. An estimated 64 percent of the Canada warbler’s population breeds in the boreal forest. The bird winters in northwestern South America. 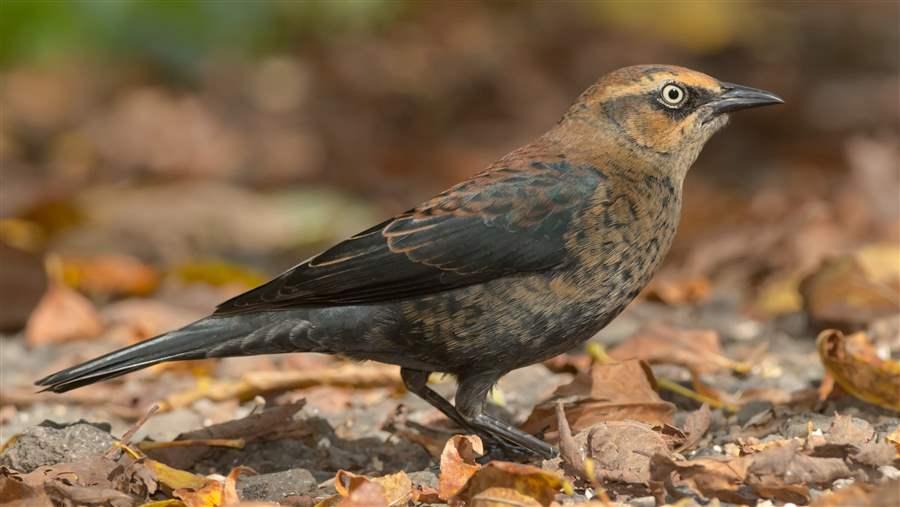 The rusty blackbird is listed as a species of special concern under Canada’s Species at Risk Act and faces threats in both its Canadian breeding grounds and its winter home in the southern United States. It has experienced one of the steepest declines of any North American bird, with estimates that more than 85 percent of its population has been lost over the past 40 years. In summer, it nests in wetlands throughout the boreal region. 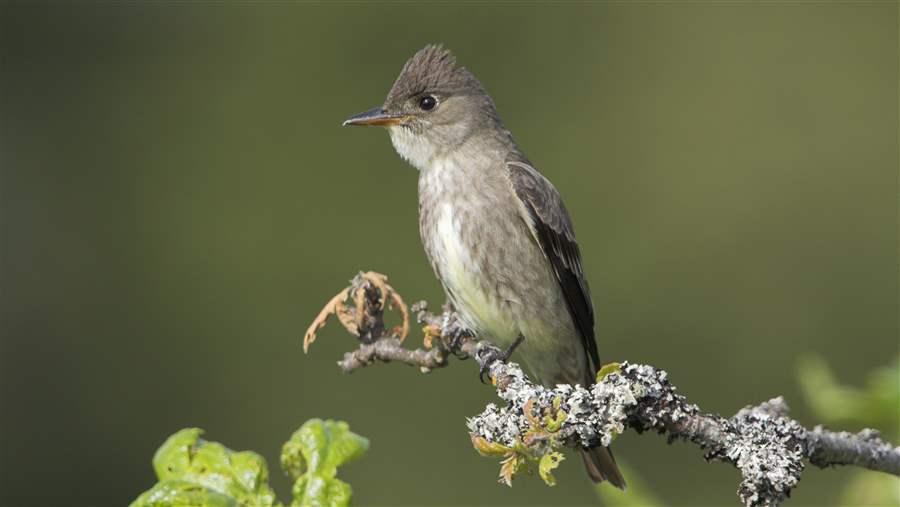 The olive-sided flycatcher has the longest migration of any North American flycatcher.

This little-known songbird is listed as threatened under Canada’s Species at Risk Act. It is notable for its emphatic three-note whistled song, which some say sounds like “quick-THREE-beers.” The Canadian government says the causes of its population decline are unclear but “are likely related to habitat loss and alteration.” An estimated 57 percent of its global population breeds within the boreal forest. 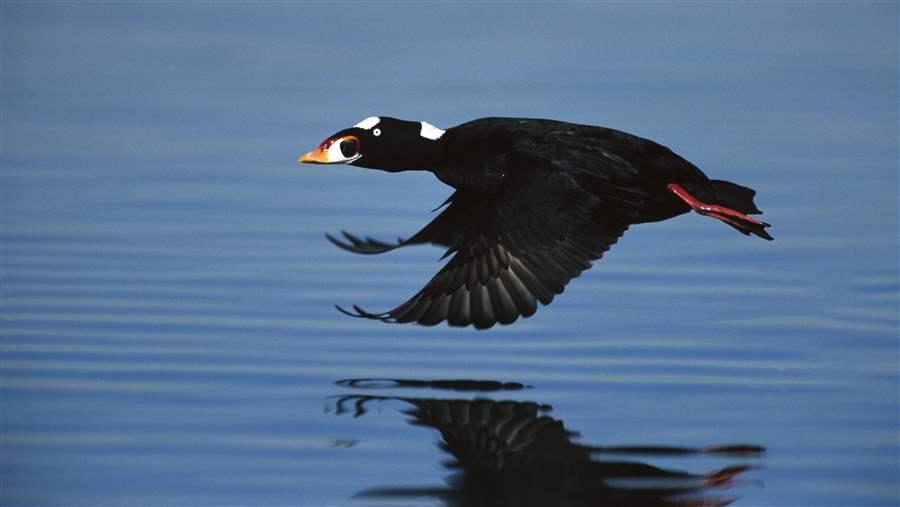 © Tom Vezo/Getty Images
The surf scoter is also known as the “skunk head.”

The surf scoter derives its nickname from the white patches on its forehead and nape. Found only in North America, an estimated 83 percent of its population breeds in the boreal forest. It winters almost entirely on the ocean. According to Ducks Unlimited, surf scoter populations are thought to be declining. 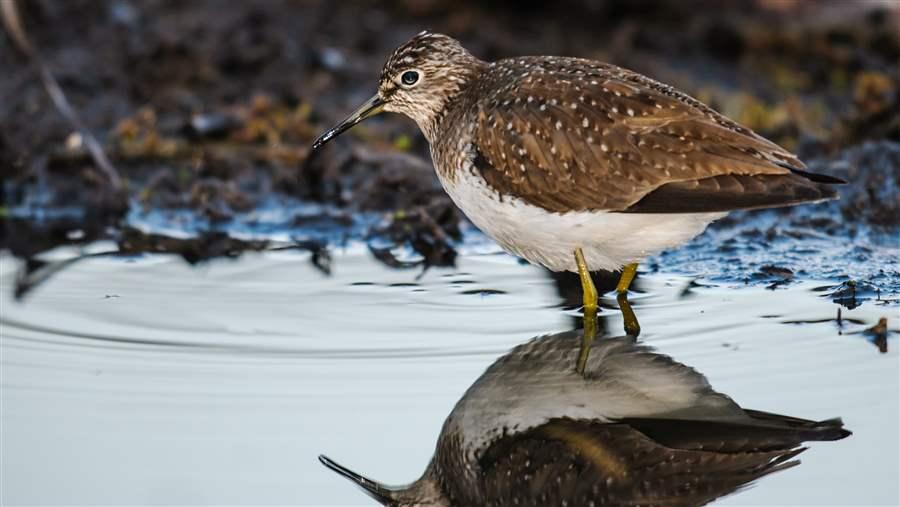 True to its name, the solitary sandpiper rarely associates in flocks.

The solitary sandpiper migrates to the boreal region each spring from as far south as Argentina. Ninety percent of its global population nests in the boreal during the summer. Its populations are thought to be stable but estimated at roughly 25,000. The species is facing threats from changes to its preferred wetland habitats in the boreal. 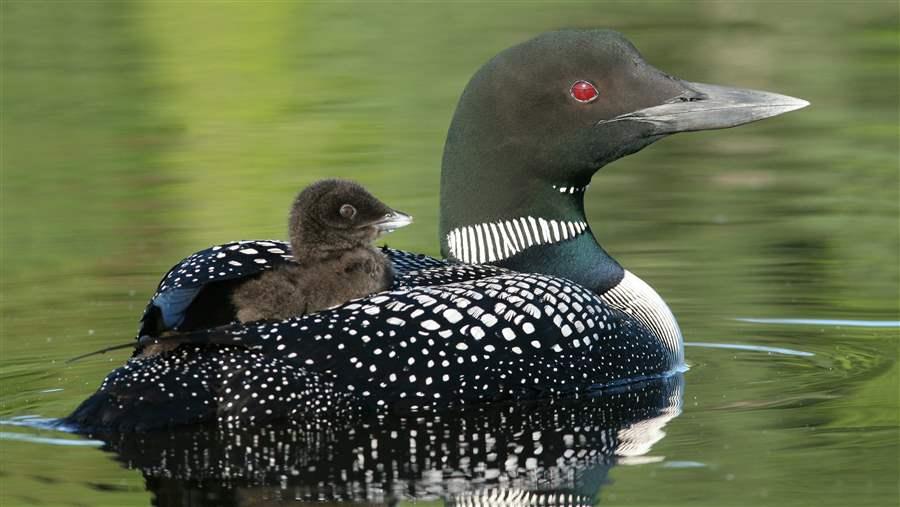 The common loon, which is featured on Canada’s $1 “loonie” coin, is arguably the most iconic bird in Canada.

The eerie, late-night call of the common loon is one of the most recognizable sounds of Canada’s boreal forest. The naturalist John Muir described it as “a strange, sad, mournful, unearthly cry, half laughing, half wailing.” About three-quarters of its North American population breeds in the boreal forest. The species is widespread but faces threats from recreational development around boreal lakes. 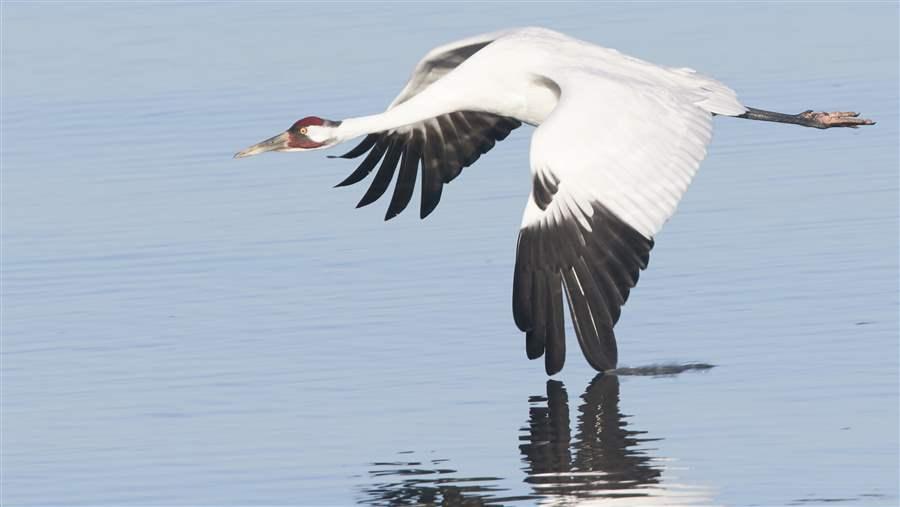 The whooping crane stands almost 5 feet tall and has a 7-foot wingspan.

Driven to near extinction in the mid-20th century, the whooping crane has made a comeback thanks to intensive habitat protection, assisted migration, and captive breeding. The U.S. Fish and Wildlife Service estimates the species’ overall population at just over 600, compared to only 16 in 1941. Whooping cranes remain listed as endangered in Canada and the United States. The species nests and breeds within Wood Buffalo National Park in Alberta and the Northwest Territories. It migrates between the boreal forest and wintering grounds on the Gulf Coast of Texas and the Arkansas National Wildlife Refuge.

Related Resources
The Boreal Forest: A Haven for Billions of Birds

Do you know how many bird species rely on Canada’s boreal forest?