World Tuna Day on May 2 celebrates one of the most popular fish on Earth.

In 2011, eight island nations in the western central Pacific Ocean began the annual tradition to celebrate the economic, cultural, environmental, and political importance of tuna to the region. After all, this fish is what brought the Federated States of Micronesia, Kiribati, the Marshall Islands, Nauru, Palau, Papua New Guinea, the Solomon Islands, and Tuvalu together as Parties to the Nauru Agreement (PNA) to manage their shared tuna resources.

Roughly 50 percent of the world’s skipjack tuna is caught in PNA waters, making it the world’s largest tuna fishery. Most ends up canned and stacked on grocery store shelves. According to the Secretariat of the Pacific Community, the tuna caught in the western and central Pacific are worth US $4 billion to $5 billion a year.

This regional wealth, however, is on the line, in part because of an influx of large commercial vessels attracted by the world market’s growing appetite for fish. International politics compound the challenges facing these nations. While the PNA controls what happens in members’ waters, tuna populations swim beyond these boundaries into international seas.

The good news is that science-based catch limits and innovative technological solutions can help secure the region’s natural wealth.

Skipjack tuna have withstood the intense pressures brought on by industrial fishing. These fish reproduce quickly and become mature at a young age, which is why no stock of skipjack has ever been overfished. Still, there are no science-based catch limits in place for the species.

Governments need to agree on a management protocol for the fishery. This means finding consensus on the desired population level, how much fishing can take place to maintain that population, and the best management tools to ensure that overfishing doesn’t eat into gains. This should include a system of catch limits; harvest control rules that set out clear steps to be taken when the catch hits those limits; and evaluation tools to make sure it all works.

Managing the impact of FADs

In addition to controlling how much fish is caught, nations fishing in the western and central Pacific also need to manage one of the most commonly used fishing gears.

Fish such as skipjack and juvenile bigeye tuna congregate under large floating objects. Historically, this happened with floating logs or other natural marine debris. But as fishing became more sophisticated, artificial floating objects called fish aggregating devices (FADs) were introduced. Just like logs, these rafts attract fish. Attached buoys with satellite tracking technology give purse seine vessels information on the FADs with the most fish beneath them. The vessels then encircle the FADs with massive nets to scoop up the fish underneath. 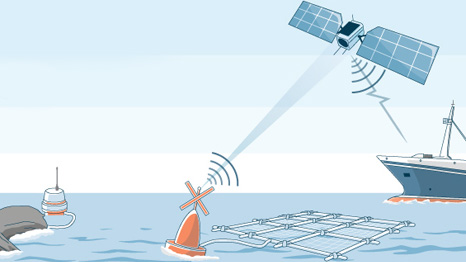 While this is an effective and efficient way to catch the popular skipjack, other species, such as juvenile bigeye tuna and silky sharks, are caught and killed as well. And with  an estimated 44,000 to 80,000 of these drifting, floating objects deployed each year in the western and central Pacific alone, vulnerable species are in decline as vast numbers of young bigeye and other fish are caught under FADs by vessels targeting skipjack tuna.

To make matters worse, because there are no limits and no accurate counts of deployed FADS, there is no way to tell where these devices end up in the ocean. However, the satellite technology used by industry to efficiently locate fish can also be used by fishery managers to monitor and regulate how the fish are caught.

An electronic FAD-tracking system based on satellite data already being collected by fishing fleets can report real-time locations of these devices as well as valuable scientific data. The system allows states to monitor FAD deployments and fishing on FADs in their waters. It also gives them a tool for better management.

Thus far, Papua New Guinea, the largest country in the PNA, has adopted an electronic system to monitor FADs and will become the first state with a stake in skipjack to improve monitoring, control, surveillance, and, most importantly, accountability.

Pew and the Gordon and Betty Moore Foundation, which have funded efforts to launch a PNA-wide electronic FAD-tracking program, are encouraged by Papua New Guinea’s actions and look forward to other efforts to put this technology to use in the region.

The future of the fishery

Although the PNA can take the lead, it cannot manage the entire region on its own. The Western and Central Pacific Fisheries Commission, which is responsible for managing all highly migratory fish stocks, including tuna and sharks, in this part of the Pacific, should agree on conservation measures that bring FAD use under control and ensure development of a fishing protocol—or harvest strategy—that brings all fishing within sustainable limits.

This World Tuna Day is another reminder that all countries with a stake in the western and central Pacific must come together to support strong, science-based catch limits and FAD management in order to secure the future of the world’s largest tuna fishery.

Amanda Nickson is director of global tuna conservation for The Pew Charitable Trusts.