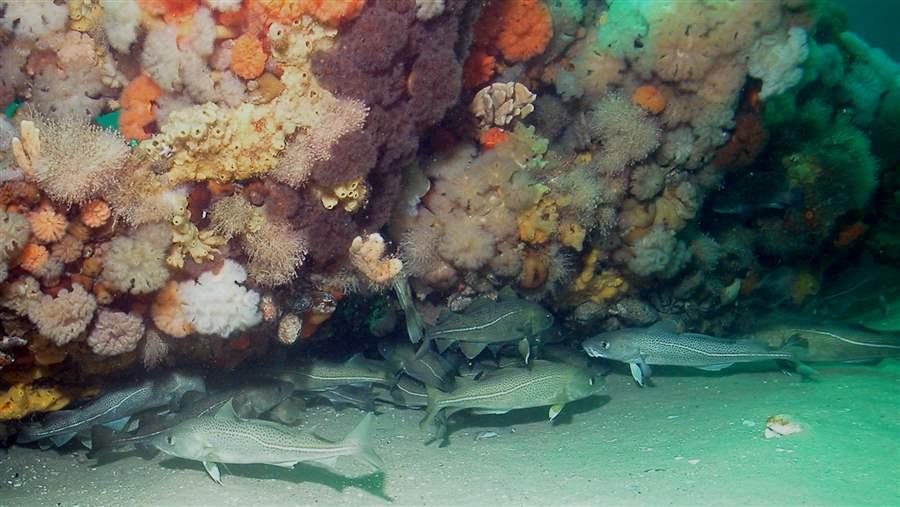 Cod swim among corals and sponges, an example of the type of habitat fish need to thrive.

Just days before a scheduled vote this week by the New England Fishery Management Council on a critical plan to protect fish habitat, the region’s top fisheries official warned council leaders in a strongly worded letter that their emerging proposal does not meet legal requirements or follow the best science.

“After a decade of development, the council may be poised to take actions that significantly weaken, rather than improve, essential fish habitat protection in New England,” wrote John Bullard, regional administrator for the National Oceanic and Atmospheric Administration’s Fisheries Service.

Indeed, the plan in its current form would eliminate protection for more than 6,000 square miles of New England waters. That’s about the size of Connecticut and Rhode Island together.

Fish, like all animals, need healthy habitat—those places where they can find shelter and food, grow, and reproduce. That’s why the nation’s law on ocean fishing requires regional fishery management councils to have adequate and up-to-date plans to protect important fish habitat. Habitat areas are sensitive to the damaging effects of bottom-trawl fishing gear, and protected habitat is especially important for fish populations that are recovering from overexploitation. That’s certainly the case here in New England, where the famed cod fishery has collapsed.

You might think that habitat protection would be an obvious priority in New England, which has the country’s worst record on overfishing and depleted fish stocks. Unfortunately, this long-overdue plan to manage the region’s ocean habitat could end up slashing protected areas by roughly 70 percent.

Scientists, conservationists, and tens of thousands of citizens have urged the council to change course. Bullard’s comments also indicate that the council’s proposed actions may skew away from his agency’s legal mandate.

Bullard warned that “recommendations for two areas in particular, Georges Bank and Cashes Ledge, are severely inadequate.” Nearly 90 percent of habitat protection could be lost on the historically important Georges Bank, east of Cape Cod. And scientists say Cashes Ledge, in the Gulf of Maine, holds a unique and valuable diversity of ocean life, including the East Coast’s largest kelp forest.

The regional administrator said he is also “very concerned” that the council has “not made use of the best available scientific information.” This echoes the message sent by 147 prominent marine scientists who signed a letter in late 2014 that called the reductions in habitat protection “unwise and unsupportable.”

The scientists point out that many of the areas slated to lose protection have been gaining habitat value as vegetation, corals, sponges, tube worms, and other sea life important for fish have built up over the years. These conservation gains are significant and could be undermined if damaged once again by bottom-trawl fishing.

Bullard concluded his letter with a plea: “I strongly encourage all of the council members to consider the long-term implications of the decisions to be made at this upcoming meeting.” For the sake of the fishing communities that depend on a healthy ocean, I hope the council takes heed at this week’s meeting.