In a win for clean energy businesses, President Barack Obama last week signed an executive order to increase the U.S. government’s use of electric vehicles and renewable resources. This action will save taxpayers money and create jobs and businesses while reducing carbon pollution. 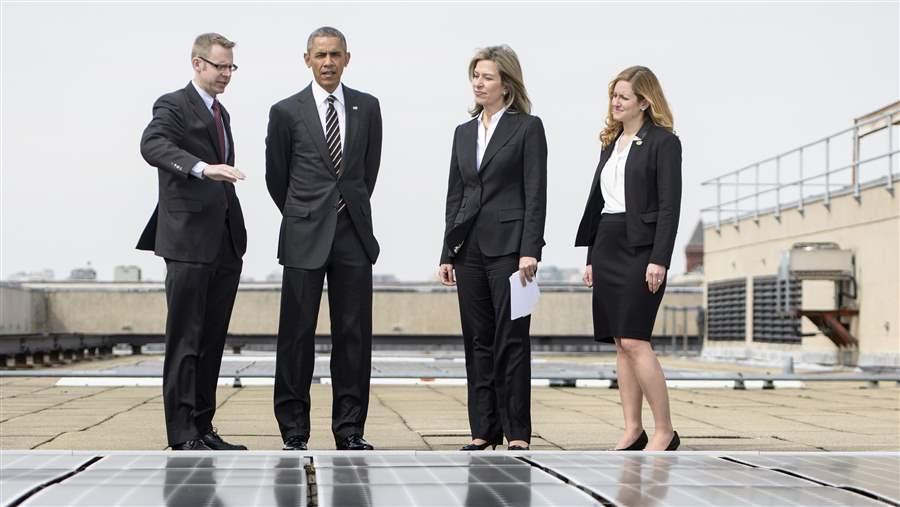 With more than 360,000 facilities, 650,000 fleet vehicles, and $445 billion spent each year on electricity and fuel, the federal government is the country’s largest energy consumer. By setting goals to obtain 25 percent of its electricity and heat from clean power sources by 2025, cut energy use in government buildings by 2.5 percent in each of the next 10 years, and expand the use of efficient vehicles in its fleet, the federal government could save as much as $18 billion in utility and fuel costs. This effort will also expand the clean economy and set an important example for the private sector. Some of the country’s largest corporations are stepping forward with ambitious sustainability goals, making additional commitments to efficiency, renewables, water conservation, and pollution reduction.

This new [executive order] will definitely drive change in both public- and private-sector contracting. Now that the scorecard has been published—and the expectation has been set going forward for all federal contractors—we anticipate that federal purchasing decisions will be directed to low-carbon suppliers, which will drive changes in the marketplace.Doug Huxley, Practice Director, Greenhouse Gas Management Program with CH2M HILL, a consulting firm focusing on energy, water, environment and infrastructure

Compliance with the executive order includes either contracting for clean energy, producing it on site, obtaining renewable credits, or installing efficient technologies such as combined heat and power. Fleets will be modernized to use electricity or technologies that lower emissions and allow vehicles to travel farther with less fuel. Planning and procurement efforts will consider resiliency to ensure continuous government operation even in the face of extreme weather or other events that could lead to grid outages. Finally, to encourage greenhouse gas reductions throughout the federal supply chain, the government has created a publicly available scorecard system that tracks emissions for major commercial suppliers and contractors.

The executive order presents an important opportunity for clean energy businesses both large and small. Many larger federal contractors are likely to look to smaller companies for goods and services to fulfill work orders related to these goals. Opportunities will extend to the broader private sector as more companies follow the government’s lead, retrofitting their offices and manufacturing facilities with clean energy and efficiency technology.

In committing to these steps over the next decade, the government is simultaneously encouraging the private marketplace, spurring energy innovation, saving taxpayer dollars, and reducing pollution.