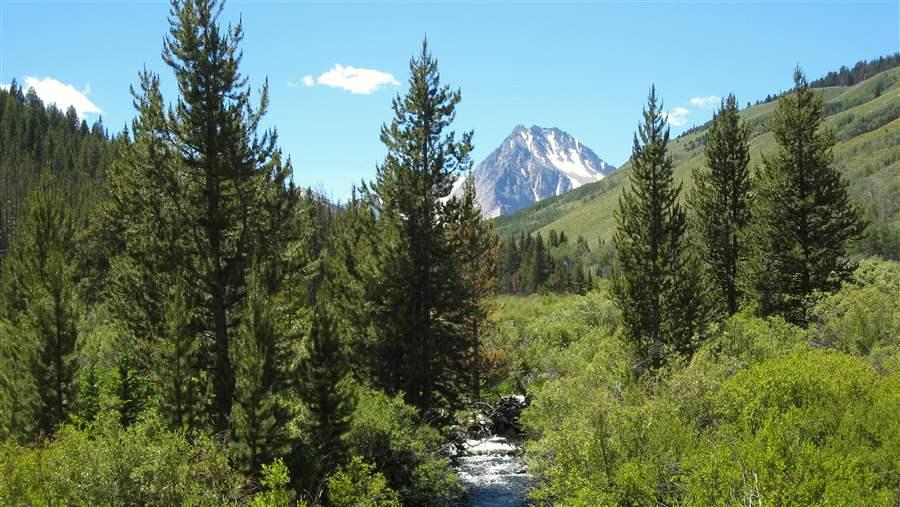 The new Congress is just 2 months old, but representatives and senators have already demonstrated a desire to safeguard more of our public lands as wilderness through two bills introduced in the past month, one each in California and Idaho. Members of Congress also participated in celebrating New Mexico’s most recent wilderness designation, Columbine-Hondo. And Senator Harry Reid (D-NV) and Representative Dina Titus (D-NV) hosted a meeting in Nevada to hear public comments on a proposal to protect several areas in the southern part of the state.

The California legislation was introduced in early February by Senator Dianne Feinstein (D-CA) and co-sponsored by Senator Barbara Boxer (D-CA). The California Desert Conservation and Recreation Act (S. 414) would increase protections on approximately 1.6 million acres of desert landscapes across Southern California. It would create or expand eight wilderness areas totaling 349,197 acres and an additional 49,300 acres of potential wilderness; designate two new national monuments—Mojave Trails and Sand to Snow; and expand Joshua Tree and Death Valley national parks and the Mojave National Preserve. In addition, it would help to safeguard key waterways, such as the Amargosa River and Deep Creek, as wild and scenic rivers.

The desert environment can seem harsh, but it teems with life, particularly near water. A number of springs in the region’s proposed Avawatz Mountains wilderness create oases for bighorn sheep, coyotes, and roadrunners. This proposed wilderness would also connect the already protected areas of Death Valley National Park and Mojave National Preserve. Nearby, the proposed Soda Mountain wilderness, at almost 80,000 acres, provides habitat for many species of waterfowl and shorebirds.

In late February, Representative Mike Simpson (R-ID) and Senator Jim Risch (R-ID) introduced legislation to preserve the Boulder-White Clouds region in the central part of their state. Pew, along with local activists and elected officials, has worked for over 10 years to protect this special place of towering mountains and deep river valleys—home to mountain goats, wolves, bighorn sheep, antelopes, and moose. Congress has come close to approving previous bills that would have safeguarded nearly 300,000 acres of wilderness in the Boulder and White Clouds mountains, but the measures never advanced beyond the hearing stage in the Senate.

Wilderness designation is the gold standard, and Boulder-White Clouds merits that protection. But because this legislative effort has stalled for more than a decade, Pew is now pursuing an administrative designation for this area. President Barack Obama can permanently protect public lands having historic or cultural significance as a national monument under authority granted through the Antiquities Act.

In February, Sen. Reid and Rep. Titus hosted a “Conversation About Conservation” in Las Vegas that was attended by Mike Connor, the deputy secretary of the interior, and Neil Kornze, director of the Bureau of Land Management. More than 300 people heard speeches about the importance of protecting public lands in a state that is home to majestic mountain ranges and unspoiled valleys. Among the areas highlighted were Gold Butte, with a wealth of cultural, historic, and natural wonders; and the Basin and Range region, part of the Great Basin and home to archeological sites and critical habitat for rare plants and animals. Opportunities to safeguard areas as large and intact as the state’s Basin and Range region are scarce.

Speakers in support of land protection included former Representative Steven Horsford (D-NV); Chairman Darren Daboda of the Moapa Band of Paiutes; Virginia Valentine, president of the Nevada Resort Association; and Isaac Barron, a member of the North Las Vegas City Council. They were joined by community groups, including a large number of residents from nearby Mesquite, in urging Nevada’s members of Congress and representatives from the Interior Department to permanently protect the state’s wild treasures.

Congress passed Columbine-Hondo, part of a package of conservation bills, in December 2014. Thanks to the efforts of local businesses, sportsmen, outdoor enthusiasts, Native American tribes, and conservationists, the law protects some 45,000 acres of the Sangre de Cristo Mountains for the elk, bears, and mountain lions found there. Former Senator Jeff Bingaman (D-NM), who first introduced legislation to designate the mountains as wilderness, was joined by Representative Ben Ray Luján (D-NM) in addressing the need to safeguard more of New Mexico’s wild places.