In a single breath, Paul Dabill can dive beneath the waves, sneak up on ocean animals, and snap captivating images of underwater life. 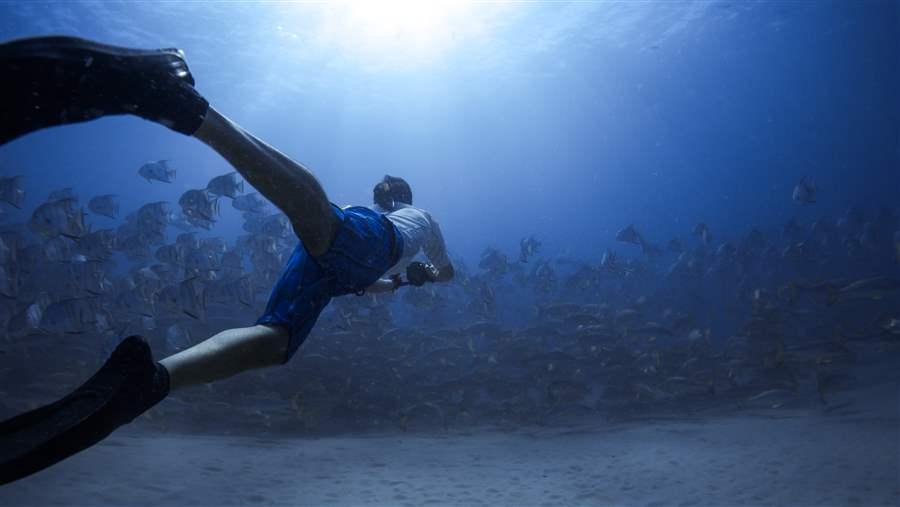 Underwater photographer Paul Dabill closes in on snook and spadefish in hopes of capturing the moment on his camera.

A self-taught nature photographer and trained free diver, Dabill catalogues the interplay between predators and prey that is critical to healthy oceans.  Through his work, the South Florida resident is adding his voice to efforts by scientists, fishermen, and conservationists who are working to protect prey species such as mullet and sardines from surging human demand.  These small fish, known as forage fish, are a vital food source for animals ranging from whales to king mackerel, but they are increasingly being caught for use as feed for fish farms and livestock and as ingredients in consumer products such as cosmetics, pet food, and fertilizers.

The Pew Charitable Trusts and the International Game Fish Association (IGFA) are presenting an online slideshow of Dabill’s work.  Shot off the coast of South Florida, the photos capture schools of mullet fleeing predators, under attack by tarpon, and traveling in giant bait balls. The slideshow and accompanying text explain the important role of prey species, the threats they face, and what can be done to conserve them.

“If my photographs spark interest and educate people, then I think they will come to value the oceans even more,” said Dabill, 40, who lives near Palm Beach. “I think the underwater world is beautiful and stunning. To capture a moment, relive it, and share it with others is a process that I find very satisfying and will hopefully make a difference.”

Pew, IGFA, and other groups believe that making a difference for forage fish means protecting their habitats and setting fishing rules that keep sufficient numbers and types of forage species in the water to meet the dietary needs of important recreational and commercial fish.

Forage fish haven’t traditionally been high-profile marine animals; many people don’t even know what they are. But Dabill’s photography offers a glimpse into the important role these fish play in ocean food webs. 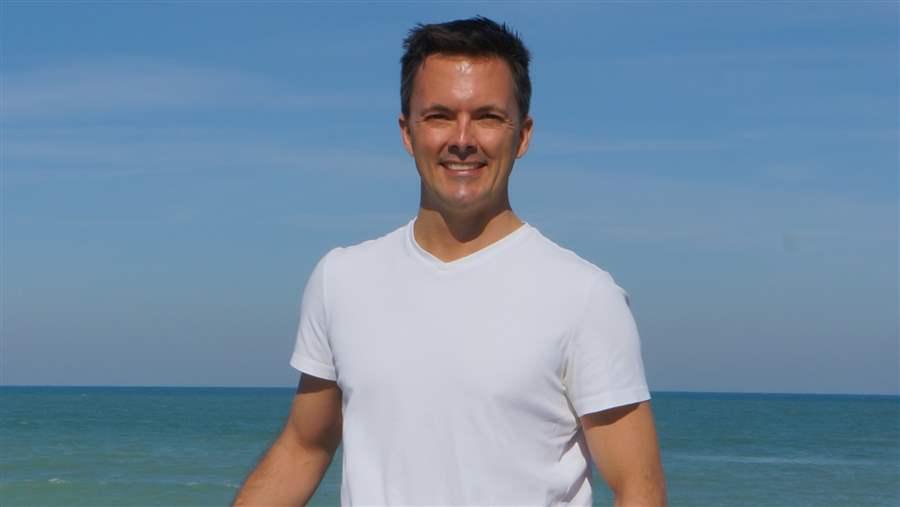 As a free diver, Dabill typically holds his breath for 90 seconds at a time while positioning himself to get the best photo angles. Although he can hold his breath for five minutes underwater while staying still, the shorter duration allows him to continue to dive for hours without getting tired. Dabill says free diving lets him get closer to wildlife than some other underwater photographers are able to do, because he can move faster without scuba equipment and the animals aren’t driven away by air tank bubbles.

Dabill uses a Sony NEX-5R mirrorless camera with Nauticam underwater housing. He shoots most of his photos off the southeastern Florida coast in shallow water to make use of natural light. Years of fishing experience have given him a good feel for where to find marine life. His over-and-under photos—in which half of the picture is taken underwater and half is above the water—help him to communicate how humans are linked with a marine environment that is close to land but often out of sight.

Dabill’s passion for photography is a recent development in a life that has led him from his native Minnesota to the sea. He earned degrees in electrical engineering and business administration and worked as a computer engineer in California. He moved to Florida in 2002 to open several restaurants with his brother.

Once settled in, Dabill took up offshore fishing and about eight years ago grew more curious about what was happening under the surface. He started spearfishing and took a course in free diving to learn how to stay underwater longer and dive deeper. Once he saw marine life from a different perspective, he wanted to share with others the treasures he discovered. He took up photography and posts his pictures on his Facebook page, Paul Dabill Photography. His images have appeared in fishing magazines such as Florida Sportsman and Florida Sport Fishing.

Dabill hopes the photos will help people appreciate what lies beneath what they see at the ocean’s surface. “I want people to realize that we still have this wealth of nature and our job now is to protect it for future generations,” he said.

If you would like to add your voice to calls for forage fish conservation, you can sign a pledge by visiting FloridaForageFish.org.

A Glimpse Into the Underwater Web of Life

Some of the smallest fish in the sea play one of the biggest roles in ocean ecosystems. Baitfish, such as mullet, ballyhoo, and sardines—also known as forage species—are food for seabirds; marine mammals, including whales and dolphins; and important fish species, such as tarpon, grouper, and king mackerel. Without enough forage fish, marine ecosystems that provide recreation, jobs, and seafood are at risk.