It takes brilliance, drive, and confidence to “print” the body of a road-ready car, devise and build mobile power stations, and use an African beetle as the model for an energy-saving material. And these are just three of the bold innovations that were on display at the Advanced Research Projects Agency-Energy (ARPA-E) energy innovation summit Feb. 9 to 11 outside Washington.

ARPA-E is an agency within the Department of Energy that funds promising early-stage technology initiatives. The annual event brings together leaders from government, industry, academia, and the nonprofit sector to discuss the future of energy in the U.S. and around the world and to showcase products and companies that are poised to change how people power their lives. 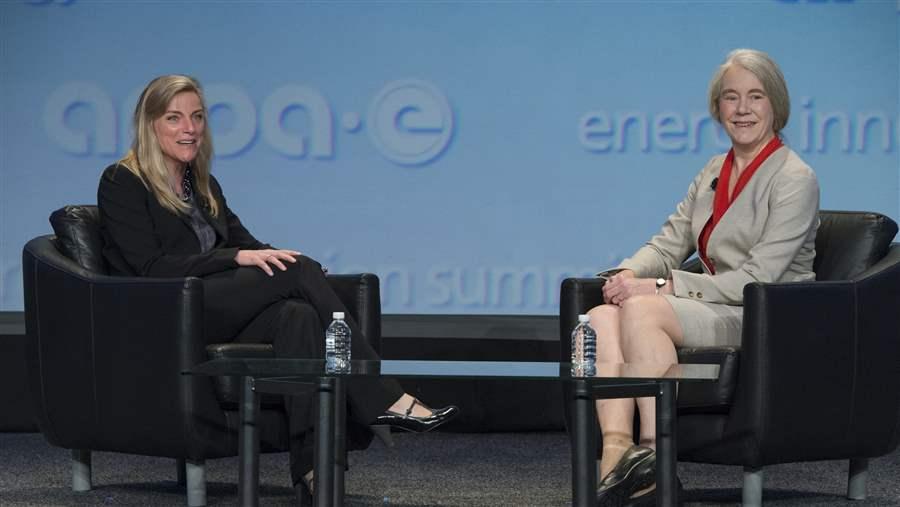 On the second day of the summit, Phyllis Cuttino, who directs Pew’s clean energy initiative, took to the main stage for a one-on-one chat with ARPA-E Director Ellen Williams. Calling ARPA-E “the coolest thing ever,” Williams said she accepted her role in part to help find solutions to climate change and other pressing challenges related to energy resources and their use.

“I am fairly sure we’ll see oil prices go back up in the next five to 10 years, so we need to create [energy solutions] to be ready for that,” Williams said. She added that lawmakers must recognize the need to invest in innovation, “to get novel technology into the marketplace to put the U.S. in position to lead the world in the energy market.”

ARPA-E, which relies on government funding and participation from the private sector, plays a critical role in that effort, she added.

“We are ‘de-risking’ a lot of early-stage, high-risk projects, then pushing them out the door. That’s a great time for the private sector to step in,” she said. That model has been highly effective—past annual summits helped launch dozens of ultimately profitable companies—and whether ARPA-E continues that trend “will be a great measure of our success,” Williams told Cuttino.

If we get the economics right, climate policy and rising middle-class income could work in concert.Brian Deese

The White House apparently agrees with that sentiment. Brian Deese, who is leaving his job as deputy director of the Office of Management to become a senior adviser to President Obama on climate issues, said the administration is launching a Clean Energy Investment Initiative with a goal of spurring $2 billion in new private-sector investment in solutions to climate change.

Deese told ARPA-E summit attendees that the White House initiative could help reverse the increasingly dire threat of climate change and, through clean energy job creation, buoy the struggling middle class. “If we get the economics right, climate policy and rising middle-class income could work in concert,” he said.

Pew, through its Clean Energy Business Network, has been working in a similar vein direction since 2009. Four companies in that network displayed their technologies at the ARPA-E summit.

One of those partners, FreeWire, is seeking to capture and use energy that now goes to waste when electric vehicle batteries are recycled. Once a battery falls below 80 percent capacity—after roughly 2,500 charges of a battery—it no longer can power a car, said FreeWire Technologies Inc. CEO and co-founder Arcady Sosinov. “For commercial energy storage, there is a lot of life left,” he added. The company captures that life and sells it back into the power grid to help reduce reliance on fossil fuels. FreeWire also has mobile charging stations—about the size of a small chest of drawers—for charging electric vehicles on the go, reducing infrastructure and logistics costs for companies that run fleets of electric vehicles. 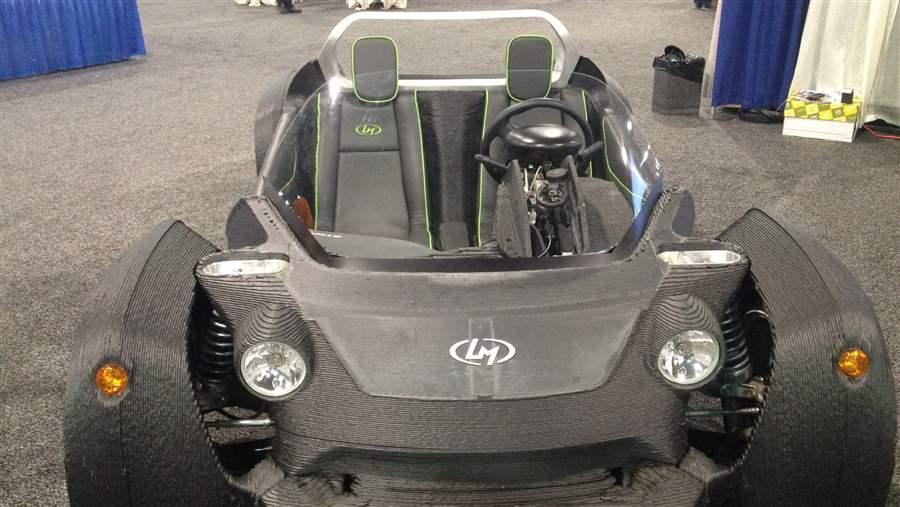 The entire body of this car, made by Phoenix-based Local Motors, was produced in 44 hours by a three-dimensional printer. It was on display Feb. 9 to 11 at the Advanced Research Projects Agency-Energy’s annual innovation summit outside Washington, D.C.

In a different niche of the mobile power space, Go Electric Inc. has a microgrid product designed to provide uninterrupted power, which would be needed in the event of a blackout, for instance, or for clients such as the U.S. military that operate far from any reliable grid. The Marine Corps is using a Go Electric unit to power Camp Smith, the base in Hawaii that is home to the Pacific Command. The technology, which the company has branded Blinkless, stores and synchronizes multiple power sources and is also ideal for small businesses that cannot afford power interruptions, such as urgent care centers, gas stations, and convenience stores, said Lisa Laughner, Go Electric’s president and CEO.

Another partner seeking to free individuals from reliance on a grid is LuminAID, which makes a solar-powered inflatable lantern that packs down to about the size of an iPhone and puts off 40 lumens light—enough to read by. The 2010 Haiti earthquake inspired the product, says LuminAID co-founder Andrea Sreshta. “We saw the devastation and the [humanitarian aid] response, and felt lighting was an overlooked need,” she said. The lantern floats and stays lit in the water, and it boasts a battery that can charge up to 600 times. LuminAID is featured on an upcoming broadcast of ABC-TV’s “Shark Tank,” the show that brings together potential early investors and new products.

And that African beetle? NBD Nanotechnologies President and co-founder Deckard Sorensen was studying bio-mimicry at Boston College when he learned about the Namibian desert beetle, which harvests drinking water from fog using humps and valleys in its body. Sorensen theorized that the bug’s natural system could be a model for capturing—or repelling—moisture to boost efficiency in a range of industrial and agricultural settings. For example, he explained that when cooling systems pump cold water through pipes, a layer of condensation forms on the outside of the pipe, “like a blanket.” The system then works doubly hard to cool that layer, compromising efficiency and costing companies a lot of extra money. One of NBD’s coatings forces the condensed water to collect into larger droplets, which tumble off the surface, taking a lot of the surrounding moisture with them when they fall.

We are now engaged in an unprecedented global experiment … with climate change. Our oceans are acidifying at the fastest rate in recorded human history. We have an urgent need to bring this experiment under control.Senator Sheldon Whitehouse (D-RI)

It is unlikely that any single emerging technology will solve the world’s energy challenges. But, as Representative Randy Weber (R-TX) told the summit audience, the U.S. must continue to foster the spirit of innovation and competition embodied by ARPA-E. “The things that make America great are the things America makes,” he said. Striking a more urgent tone, Senator Sheldon Whitehouse (D-RI) said, “We are now engaged in an unprecedented global experiment … with climate change. Our oceans are acidifying at the fastest rate in recorded human history. We have an urgent need to bring this experiment under control.”

The genius and drive on display at ARPA-E showed the commitment—from government, industry, the nonprofit sector, and beyond—to accomplish that by harnessing American entrepreneurship and innovation to create new technologies, businesses, and jobs that benefit our economy.