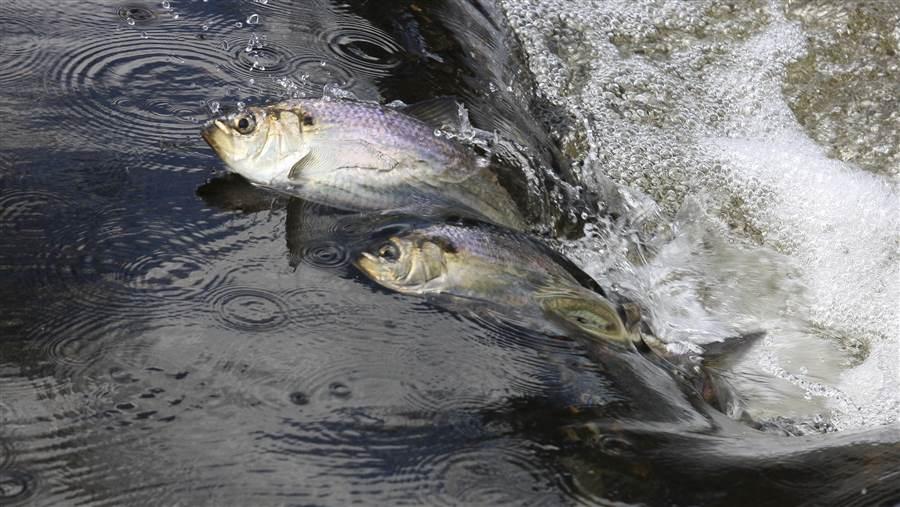 River herring making their way up a fish ladder in Massachusetts.

Blueback herring, a species of river herring, were once found in such enormous numbers that rivers along the Atlantic coast were said to run silver with millions of the fish during their spring migration. That was before a deadly mix of dams and pollution in rivers and overfishing at sea reduced bluebacks to a small fraction of their historic population size.

While there’s been progress to improve habitat in rivers, the threat in the oceans remains. That’s why our friends at Earthjustice, the Natural Resources Defense Council, and a coalition of grass-roots fishing and watershed groups filed a complaint in U.S. District Court on Feb. 10, seeking to reverse a federal government decision not to put blueback herring on the nation’s list of threatened species.

Science provides clear evidence that this river herring species is in trouble. People along the Atlantic coast have fished for blueback herring for more than three centuries, but over the last 50 years the species has declined nearly 99 percent. Three of the four regional blueback herring populations along the coast are probably still decreasing, despite commendable work to remove obsolete dams and restore access to spawning areas.

Scientists have pointed to industrial fishing at sea as a reason for the blueback’s persistent problems. Too often, these little fish get scooped up in the giant nets of trawling vessels targeting other species, such as mackerel and Atlantic herring (the oceanic cousins of river herring).

The U.S. agency responsible for protecting this species, NOAA Fisheries, acknowledges that numbers of blueback herring are at or just under 2 percent of the historical baseline. Despite this evidence, NOAA Fisheries officials declined a petition filed in 2011 to put these fish on the Endangered Species Act’s list of threatened species.

Putting the species on the threatened list would require officials to designate critical habitat for bluebacks and bring a sense of urgency to efforts to protect these fish.

Time and again, NOAA Fisheries has declined to take meaningful action to protect bluebacks and other river herring species.

When New England’s regional fisheries managers asked for more independent observers aboard the industrial trawling vessels that needlessly kill millions of river herring, the agency refused. And when conservationists asked NOAA Fisheries to create a management plan for river herring, the answer again was no.

The groups now filing suit to protect blueback herring, including members of the Herring Alliance, say that action to protect this important but imperiled species is long overdue. And we agree. Bluebacks and other river herring species, once fully restored, could again fulfill their vital ecological role as an important source of food for game fish, seabirds, and marine mammals in the sea and in our rivers.

As a nation, we have invested so much in the recovery of these species that we cannot let those efforts get lost at sea because of wasteful fishing practices. And while we have cleared many waterways of dams and other impediments that have outlived their usefulness, we still must deal with many more. Placing the blueback herring on the “threatened species” list could help us finally address the chronic problems we know must be solved.