The catch cap will reduce the wasteful bycatch by trawlers and will push the Atlantic herring industry to avoid fishing in areas and at times with the greatest likelihood of killing river herring and shad.

Fisheries managers in New England and the mid-Atlantic have a chance to protect river herring and safeguard the public investment of millions of restoration dollars. The fishery management councils for these two regions are set to vote on measures to control the number of these important but imperiled fish that are killed needlessly at sea.

River herring and their cousins, shad, spend much of their lives in the ocean and return to the waterways where they were born to spawn. A lethal combination of dams blocking access to native rivers and industrial-scale fishing at sea has pushed many populations to record low numbers.

Millions of dollars and untold hours of volunteer effort have gone into restoring these fish by removing dams, installing fish passages, and improving river habitat. But those efforts are undermined when the fish return to sea. Too often, they are scooped up by a powerful fishing fleet targeting other species such as Atlantic herring and mackerel.

“Dams have come down, fish ladders and passages have gone up, and yet we have still not regulated the damage caused by some of the largest fishing vessels on the Atlantic coast,” explained Peter Baker, northeast oceans director for The Pew Charitable Trusts.

“We can't continue to let these investments in our rivers be put at risk by wasteful fishing practices at sea,” cautioned Baker. 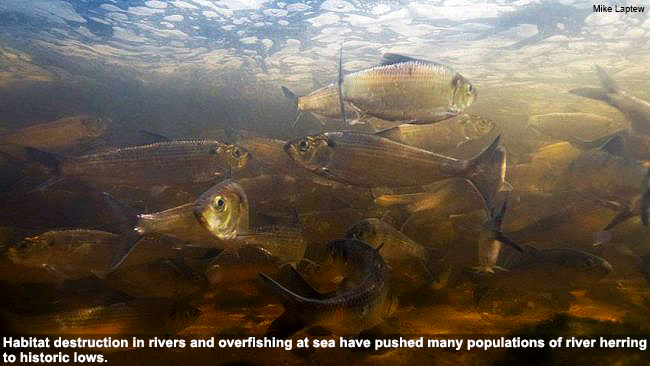 Working together to restore river habitat 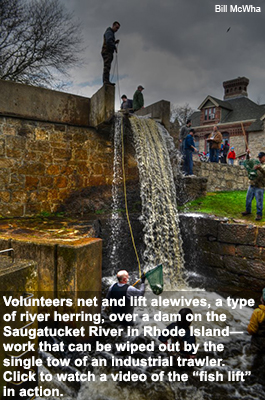 Herring Alliance members have spearheaded a number of efforts over the past several years to restore runs of river herring and shad. Organized by Pew in 2007, the Alliance has 71 organizations working to protect and restore ocean wildlife and ecosystems from the Carolinas to Maine.

These efforts include “fish lifts,” in which volunteers net and lift the fish over dams to help them reach their spawning places. One such lift was organized this spring by the Delaware River Shad Fishermen's Association. Anglers know that these small fish play an important role in the coastal food web, feeding seabirds, marine mammals, and predator fish. That's why recreational fishermen are often among the volunteers who take to waterways along the Atlantic coast each spring to conduct herring counts, improve water quality, and restore habitat.

Other groups have organized to bring down obsolete dams. Play the video below to watch the dismantling of a century-old dam.

The Jones River Watershed Association, a Herring Alliance member based in Kingston, MA, worked with state, local, and federal agencies to remove the Wapping Road Dam in 2011. River herring have now returned to upper stretches of the river for the first time in more than 100 years. The small project required more than $500,000 in public and private money. Other dam removal projects are far more costly. Clearing dams from Maine's Penobscot River, for example, is expected to total more than $20 million. 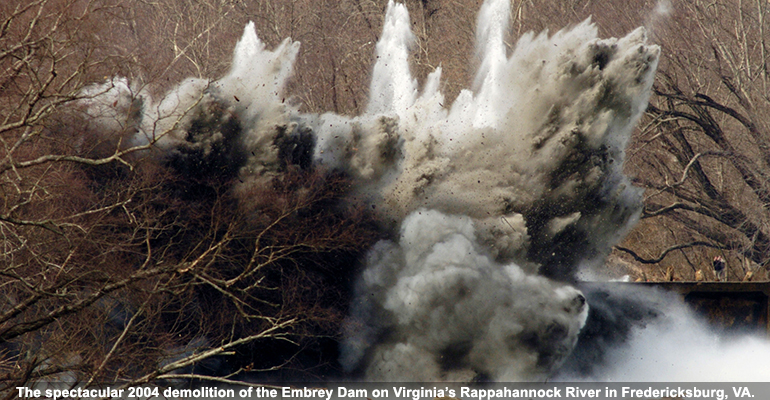 The Friends of the Rappahannock, a Herring Alliance member in Virginia, worked closely with the Army Corps of Engineers and other partners in 2004 to remove the Embrey Dam from the Rappahannock River, which flows into the lower Chesapeake Bay. The river herring fisheries of the Chesapeake—historically the country's largest—have been virtually eliminated despite many restoration efforts. 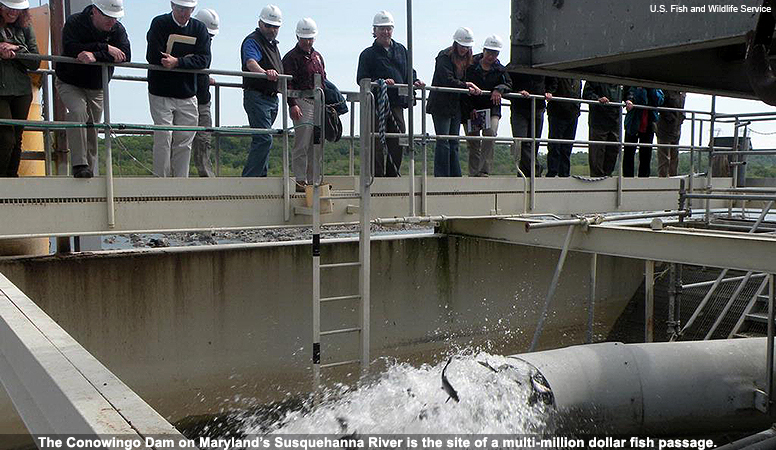 In Maryland's Susquehanna River, for example, hundreds of thousands of blueback herring (a species of river herring) were using the Conowingo Dam fish passages (pictured above) in 2001. But by the end of the decade, the number of fish passing by the dam was measured in single digits. 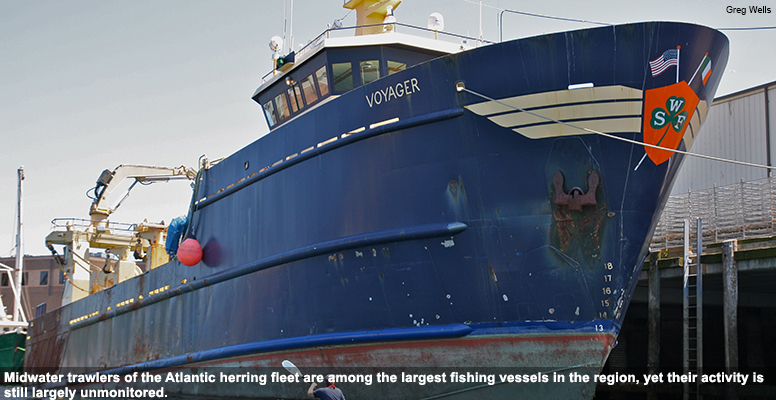 Setting the stage for stronger protections at sea

The at-sea catch of river herring and shad by the industrial fleets targeting Atlantic herring, mackerel, and squid has a significant effect on the river-running species. Large, powerful vessels work in pairs to pull nets capable of capturing half a million pounds of sea life in a single tow. The rapid growth of this fishing practice over the past decade closely correlates with the declines in many river herring populations. Scientists estimate that roughly 3.8 million bluebacks and alewives are killed in these nets each year.

Pew is working with partners and fisheries managers to limit the incidental catch of river herring and shad and improve at-sea monitoring of fishing vessels. The Mid-Atlantic Fishery Management Council took a good first step this summer by placing a cap on river herring and shad caught at sea by industrial trawlers targeting mackerel. Managers in New England are now poised to follow suit with a vote Sept. 26 on the first limits on the Atlantic herring fishing fleet.

Ultimately, the regional fishery management councils should directly manage river herring and shad in the ocean. That's what the mid-Atlantic council will consider at its next meeting on Oct. 8. Officials will vote on a measure that would bring the full force of federal law to bear on decisions concerning catch limits and other restoration measures.

Of course, a limit on the catch of river herring would not be meaningful or enforceable unless managers know what is really happening on the water, and that depends on at-sea monitoring of the fishing fleets. The councils must find a way to place trained fishery observers on every trawler and limit the current practice of dumping unwanted catch at sea.

“Catch caps, monitoring, and more active management could greatly reduce the number of river herring and shad that are lost at sea,” Pew's Baker said. “Without those actions, our work to improve rivers could be washed away.” 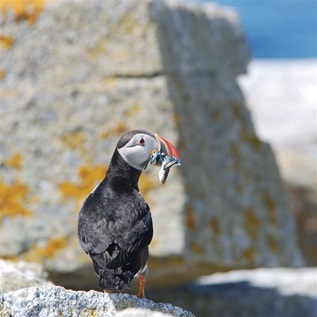 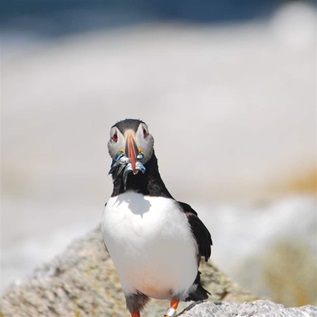 September 17, 2018 Off the Maine Coast, Puffins Reveal Secrets of Atlantic Herring and the Ocean 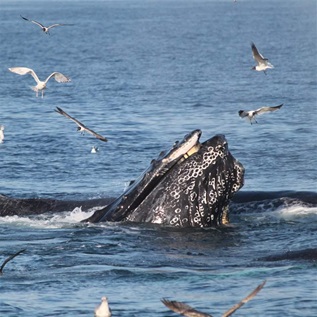