The deceleration in state and local spending occurred principally because of slower growth in the two largest cost categories: Medicaid (funded jointly by the states and the federal government), and state and local employee health insurance premiums. (Other areas of state and local health care spending in the Centers for Medicare & Medicaid Services’ report include Medicare contributions for public employees, public and general assistance, maternal and child health, vocational rehabilitation, public health activities, hospital subsidies, state phase-down payments, and investment in research, structures, and equipment.)

While state Medicaid spending increased by 22 percent and 12 percent in 2011 and 2012, respectively, it grew by only 6 percent in 2013. Similarly, spending on state and local employee health insurance continued to rise slowly as it had done in 2011 (3 percent) and 2012 (4 percent), increasing by only 2 percent in 2013. Several factors contributed to these trends.

Calendar year 2013 marked a return to a more typical Medicaid spending pattern after a surge and then retrenchment of federal aid in recent years. Under the American Recovery and Reinvestment Act of 2009 (and later legislation that extended certain provisions of the law), the federal government contributed an extra $103 billion to Medicaid, with states receiving the bulk of that total in 2009 and 2010. The Great Recession swelled Medicaid rolls and drove increases in total program expenditures, but the states’ share of Medicaid spending actually declined because of federal stimulus money.2

The extra federal money stopped flowing in July 2011, which was the primary reason state Medicaid expenditures rose steeply that year and in 2012, and why federal Medicaid expenditures fell. But in 2013, the temporary effects of this retrenchment in federal aid faded, and both federal and state spending rose by about 6 percent.

Total Medicaid spending was likely to have increased substantially in 2014, when millions of Americans were added to states’ rolls after many of them expanded their eligibility requirements for the program under the Affordable Care Act.3 But most of this hike will have been paid for by the federal government, which covered the entire cost of care for newly eligible enrollees.4

Despite the recent slowdown in spending, health care still poses serious fiscal challenges for states and localities that must balance their spending and revenue each year.

Health care expenditure as a share of state and local revenue was 31 percent in 2013 for the second consecutive year, up from 16 percent in 1987. (See Figure 1.) 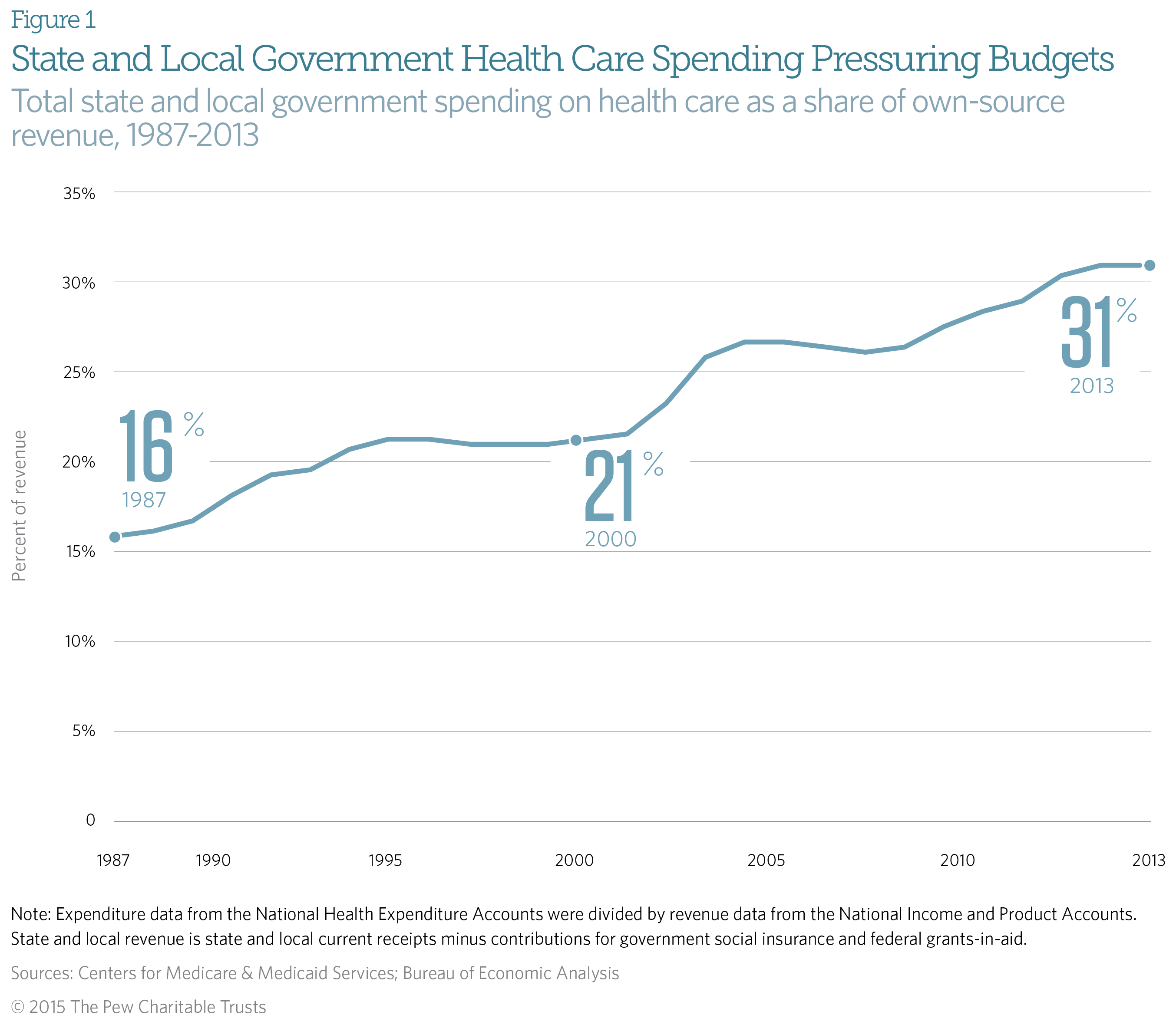 Combined health care expenditures by state and local governments increased by an inflation-adjusted 262 percent during that time. The most significant elements of this expansion were state and local contributions to public employee health insurance premiums and to Medicaid, which experienced inflation-adjusted increases of 447 percent and 386 percent, respectively. (See Figure 2.)

The Centers for Medicare & Medicaid Services projects that state and local government spending will rise by 49 percent in inflation-adjusted* dollars from 2013 to 2023.7 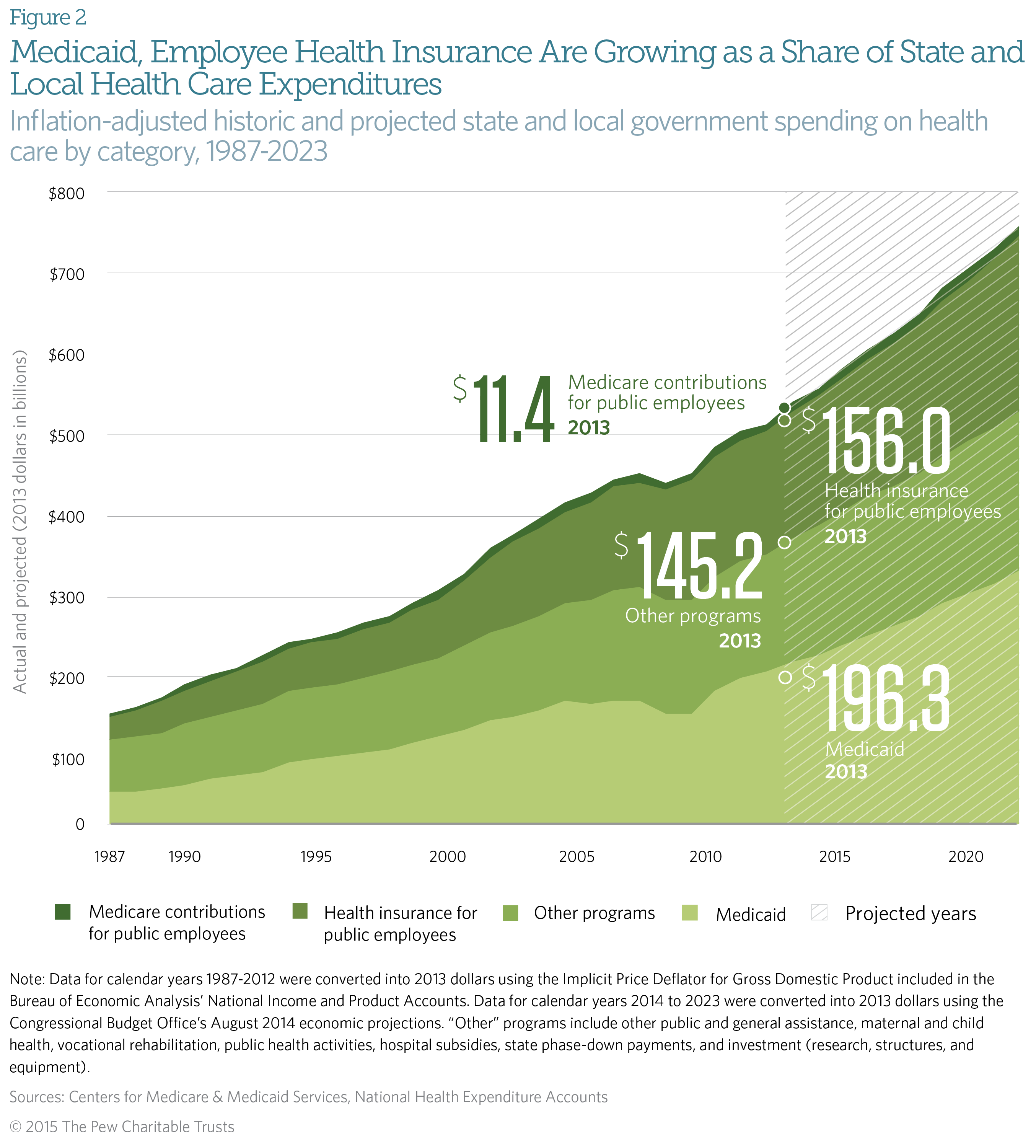 Looking further ahead, the Government Accountability Office—the nonpartisan investigative arm of Congress—warns that health care spending is the primary driver of the long-term fiscal challenges that it expects state and local governments to face. According to the agency’s simulation, state and local health-related expenditures will nearly double as a percentage of gross domestic product from 2014 to 2060.8 (See Figure 3.) 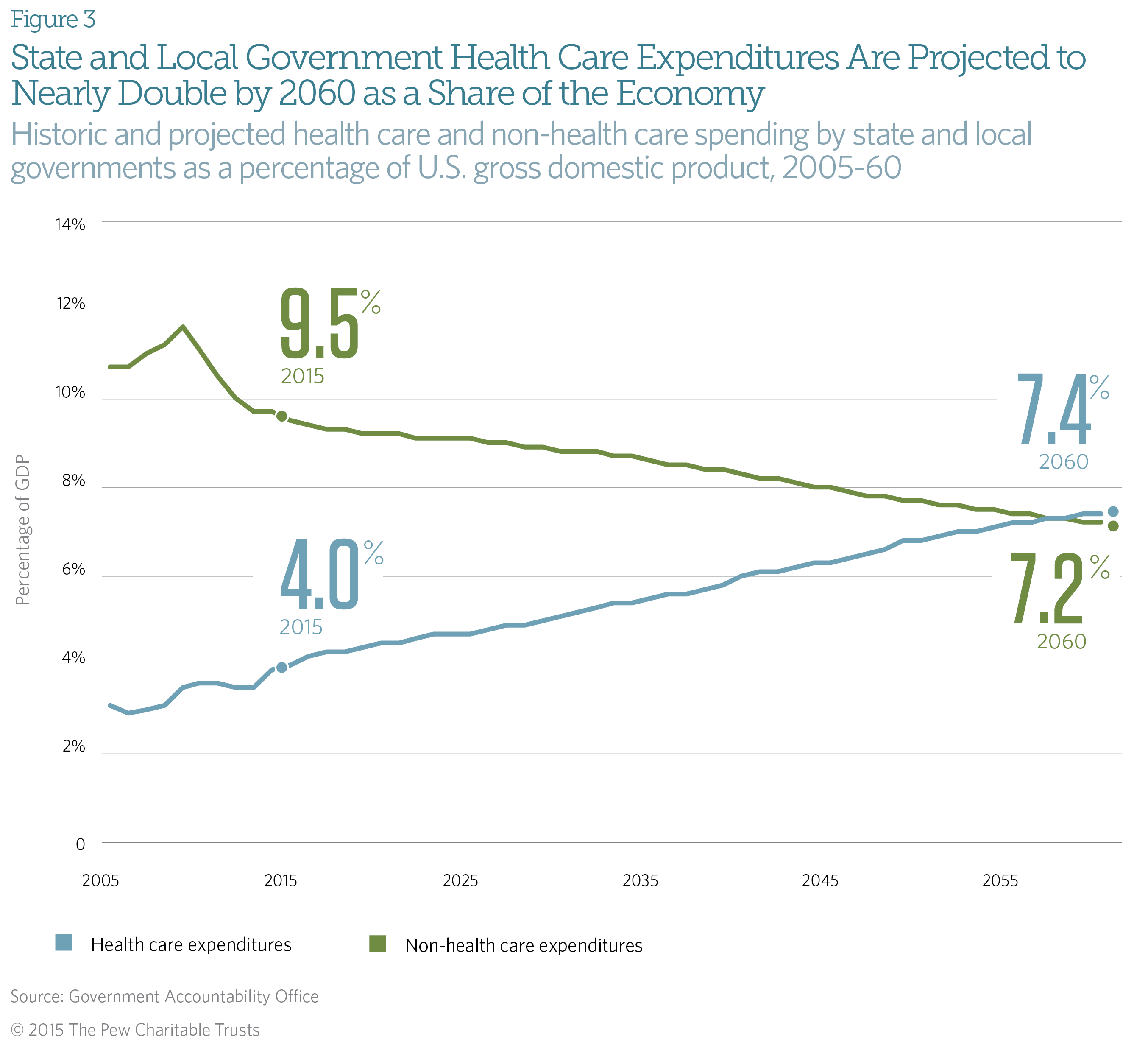 The State Health Care Spending Project, a collaboration between The Pew Charitable Trusts and the John D. and Catherine T. MacArthur Foundation, examines seven key areas of state health care spending—Medicaid, the Children’s Health Insurance Program, substance abuse treatment, mental health services, prison health care, active state government employee benefits, and retired state government employee benefits. The project provides a comprehensive examination of each of these health programs that states fund. The programs vary by state in many ways, so the research highlights those variations and some of the key factors driving them. The project is concurrently releasing state-by-state data on 20 key health indicators to complement the programmatic spending analysis.