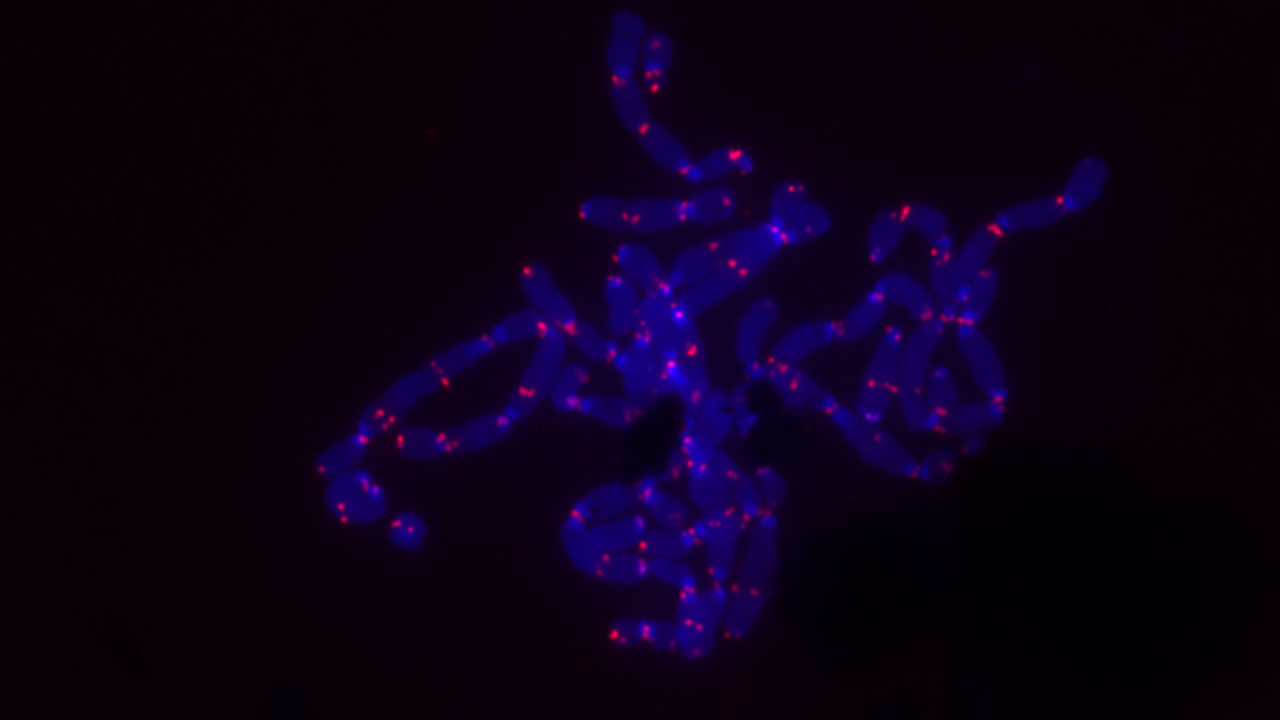 Chromosomes (in blue) are fused together due to a genetic mutation that causes them to lose the protective caps of their telomeres, the specialized DNA structures that prevent chromosomes from fraying (in red).

Agnel Sfeir, a 2014 Pew-Stewart Scholar for Cancer Research and assistant professor at New York University’s Langone School of Medicine, has elucidated the role of an enzyme elevated in breast and ovarian cancer tumors that could lead to novel, targeted therapies. Breast and ovarian cancers are among the leading causes of cancer death for women in the United States.

In collaboration with 2011 Pew biomedical scholar Eros Lazzerini Denchi at the Scripps Research Institute, Sfeir set out to understand why the ends of two different chromosomes sometimes fuse together—a malfunction common in cancer cells. While the fusion of DNA within individual chromosomes happens in healthy cells during DNA repair, the process can go awry via an alternative pathway that inserts errors and allows separate chromosomes to stick together.

The researchers homed in on the role of one enzyme known as polymerase theta, or PolQ. Previous studies found that PolQ is active in several types of tumors, including those linked to the BRCA1 and BRCA2 genetic mutations, a known cause of inherited cancers. By analyzing the DNA at the end of chromosomes, Sfeir’s team demonstrated that PolQ promoted the harmful chromosome fusions seen in breast and ovarian tumors—and saw impressive results when they stopped the process.

“It was quite remarkable to find that by blocking PolQ action, cancer cell growth was cut by more than half,” said Sfeir.

In future studies, Sfeir and her team will examine the process PolQ uses to insert DNA into the caps of fusing chromosomes, which will pave the way for treatments for breast and ovarian cancers, as well as other forms of this disease.

The Pew-Stewart Scholars for Cancer Research is a national initiative funded by the Alexander and Margaret Stewart Trust and administered by The Pew Charitable Trusts to support promising early-career scientists whose research will accelerate discovery and advance progress to a cure for cancer. Learn more about Pew’s biomedical programs.