On a globe, the ocean appears to be one expansive body of water covering about 70 percent of the Earth’s surface. In reality, there are boundaries—put in place by governments—that break up and define ocean regions. These borders, though invisible, create barriers that prevent large swaths of the sea from being considered for conservation measures such as marine protected areas.

Here’s why: Every coastal country has an exclusive economic zone that extends 200 nautical miles from shore. National regulations govern these zones and can be used to enforce fisheries management and to protect ocean resources within them. But beyond those areas, in the waters known as the high seas, a patchwork of incomplete international or regional agreements and treaties provides limited ability to protect marine biodiversity, leaving large gaps in governance.

That situation may be about to change, however. A special working group of the United Nations General Assembly will meet Jan. 20-23 in New York to decide whether to ask world leaders to launch negotiations on an agreement that could create new avenues for protecting increasingly vulnerable marine life in the high seas. 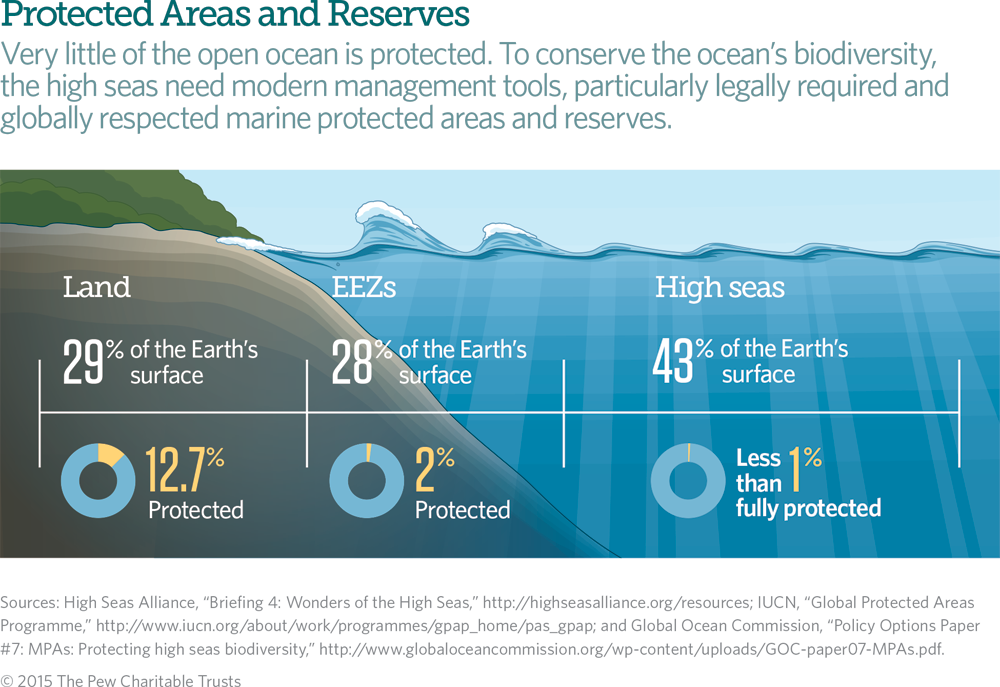 Today, less than 1 percent of the world’s ocean is fully protected, compared with 12.7 percent of the land. A June 2014 report issued by the Global Ocean Commission, an independent initiative made up of 17 leaders from around the world, found that the amount of protected ocean is wholly inadequate, given the benefits that the high seas provide to the ecosystem—food, oxygen production, and carbon sequestration among them.

In September, José Maria Figueres, the commission’s co-chair, said the U.N. “must urgently initiate negotiations for a high seas agreement so that ocean health and its restoration are finally recognized as a global priority.” Over 260,000 people from around the world signed a petition calling for action. 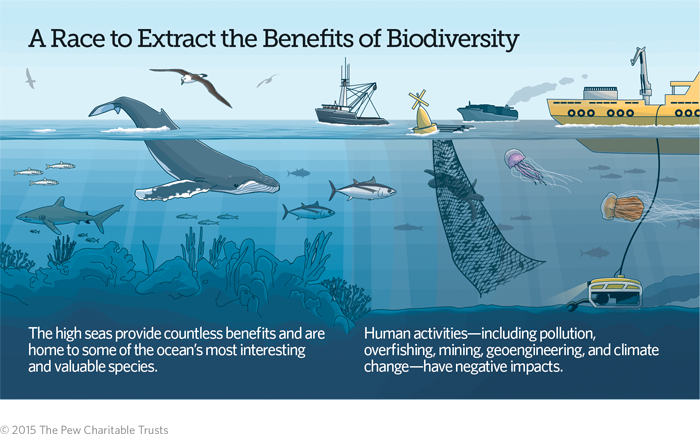 The high seas cover nearly two-thirds of the ocean’s surface. Overlapping interests, complicated jurisdictional issues, and gaps in authority have made protection of these waters nearly impossible to manage. At the same time, the growing threat from human activities, including pollution, overfishing, mining, geoengineering, and climate change, has made an international agreement to protect these waters more critical than ever.

By launching negotiations on a new implementing agreement under the U.N Convention on the Law of the Sea, the General Assembly could ensure that conservation measures are put in place within the next decade. The agreement could address development issues and provide mechanisms for creating marine protected areas, conducting environmental impact assessments, building sustainable capacity, and sharing marine genetic resources.

“The upcoming decisions could signal a new era of international cooperation on the high seas,” said Karen Sack, senior director, international oceans, at The Pew Charitable Trusts. “If countries can commit to work together on legal protections for biodiversity on the high seas, we can close existing management gaps and secure a path toward sustainable development and ecosystem recovery.”