Despite a slump in the first half of 2014, total state tax collections still exceeded their highest level from before revenue plunged during the Great Recession. But state by state, recovery is uneven. Adjusted for inflation, tax receipts in 29 states had not fully rebounded by the second quarter of 2014.

For the fifth straight quarter, total tax revenue for the 50 states was above a key benchmark on the road to recovery. In real dollars, overall tax collections in the second quarter of 2014 were 1.6 percent higher than their peak in the third quarter of 2008, just before the recession took a toll on state tax revenue. 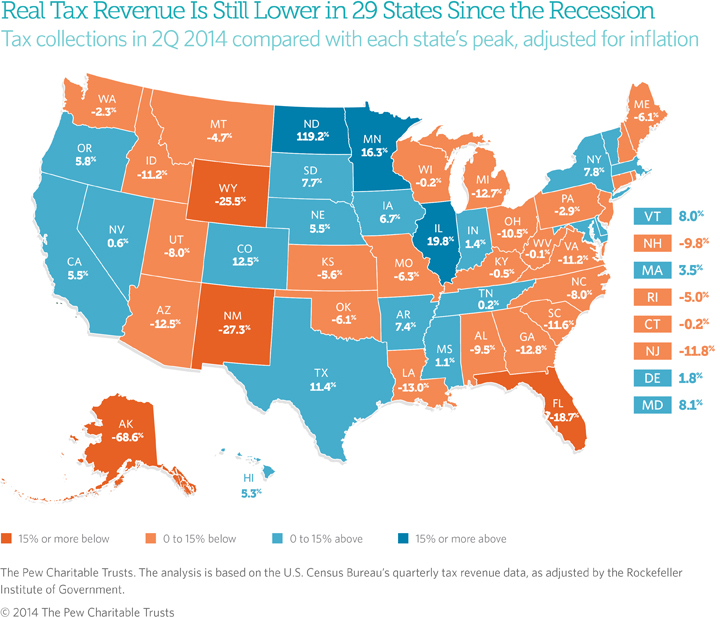 The latest results mark the second tax revenue decrease after 16 straight quarters of increases, after adjusting tax dollars for inflation and seasonal fluctuations. But it is not being interpreted as a sign of new economic troubles. The declines were largely anticipated as the consequence of a one-time surge in receipts in the prior year as taxpayers accelerated payments to avoid new, higher federal rates on capital gains and other income.

Declines in the first two quarters of 2014 were driven primarily by drops in personal income tax collections, which make up about a third of overall tax revenue. In real terms, total tax revenue decreased in 36 states in the second quarter of 2014, knocking three states off the previous quarter’s list of those where tax receipts had recovered to peak levels. Connecticut, West Virginia, and Wisconsin each took in fewer dollars in personal and corporate income taxes, compared with a year earlier, and West Virginia was one of a handful of states to collect less in sales taxes.

Looking ahead, tax revenue is expected to pick up again. A summer 2014 survey of state legislative fiscal offices by the bipartisan National Conference of State Legislatures found that 43 states expected tax revenue to grow in fiscal 2015, which began in July in all but four states. Preliminary figures for the July-September 2014 quarter show personal, sales, and total tax revenue growing again, according to the Nelson A. Rockefeller Institute of Government.

A comparison of each state’s unique peak quarter of revenue before the end of the recession and its tax receipts in the second quarter of 2014, averaged across four quarters and adjusted for inflation, reveals that:

A return to peak tax revenue levels can result from economic growth as well as from tax increases or other policy changes. More than half of the 21 states that are collecting more money than at their inflation-adjusted peak have raised taxes since the start of the recession. Likewise, a failure to return to peak tax revenue levels can be due to economic conditions or to tax cuts.

As states regain fiscal ground lost in the recession, policymakers face pressure to catch up on investments and spending postponed due to the downturn. That may be more difficult in states where tax revenue remains below its previous peak. But even a return to peak levels can leave states with little extra to make up for cuts in federal aid or to pay for costs associated with population increases, growth in Medicaid enrollment, deferred needs, and accumulated debts.

Without adjusting for inflation, 50-state quarterly tax revenue was 10.6 percent above peak, and tax collections had recovered in 35 states as of the second quarter of 2014. Unadjusted figures do not take into account changes in the price of goods and services.

Download the data to see individual state trends from the first quarter of 2006 to the second quarter of 2014. Visit The Pew Charitable Trusts’ interactive resource Fiscal 50: State Trends and Analysis to sort and analyze data for other indicators of state fiscal health.