The boreal forest of Canada sprawls across 1.2 billion acres, covering the northern half of the planet’s second-largest nation in a thick blanket of green.

It is a remote and daunting landscape with global environmental value, one of the few remaining large-scale wildernesses on Earth that is still largely undisturbed.

But it is far from empty. 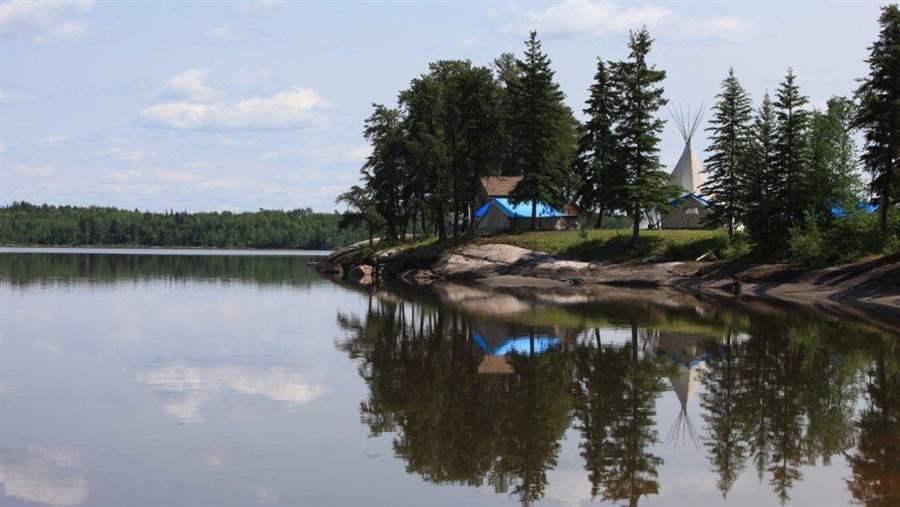 Members of the Poplar River First Nation in the boreal forest of northern Manitoba held a cultural camp at Weaver Lake in August 2014 that promoted their spiritual connection to their land.

More than 600 indigenous First Nations call the boreal forest home. It is the place where their cultures developed and thrived over millennia, and they are deeply invested in ensuring its continued health.

Over the past decade, these indigenous peoples have emerged at the leading edge of boreal conservation efforts in Canada, crafting innovative land use plans that incorporate traditional knowledge into the management of protected areas and parks.

That indigenous leadership will be showcased at the World Parks Congress Nov. 12-19 in Sydney, Australia, where several indigenous groups from Canada will share their conservation success stories with 5,000 international delegates.

A delegation from Canada sponsored by the International Boreal Conservation Campaign will include representatives from the Lutsel K’e Dene First Nation in the Northwest Territories and from the Pimachiowin Aki site straddling Manitoba and Ontario.

Each First Nation contingent has helped to reshape processes for creation and management of protected areas in traditional indigenous territory and assumed new responsibilities for stewardship over lands and resources. 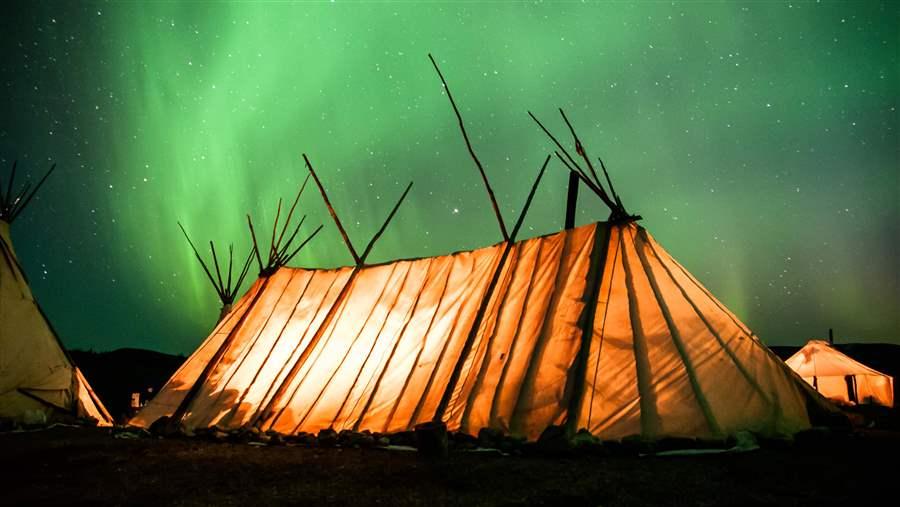 The aurora borealis illuminates the night sky behind a traditional indigenous tent in the boreal forest region of Canada.

The communities have lived on these lands for thousands of years. Pimachiowin Aki’s bid to be recognized as a UNESCO World Heritage Site has won support from indigenous groups around the world and prompted an international debate over the intersection of nature and culture in UNESCO’s evaluation of places with global value.

"It’s really impressive to look at a map and see how many conservation areas have been developed in Canada under indigenous leadership," said Courtois, who is Innu from the community of Mashteuiatsh in Quebec. "They’re not just little tiny spots on a map, either. They are large landscapes."

The Pew Charitable Trusts supports the work of the Indigenous Leadership Initiative through the boreal conservation campaign and advocates for more extensive indigenous land management in the boreal forest.

A central theme of the World Parks Congress is “Respecting Indigenous and Traditional Knowledge and Culture” in management of protected areas. Delegates will focus on the importance of recognizing cultural and spiritual values “in sustaining and enhancing the socio-environmental resilience of Indigenous Peoples and local communities and the lands and seas in their care,” according to the event’s programme. 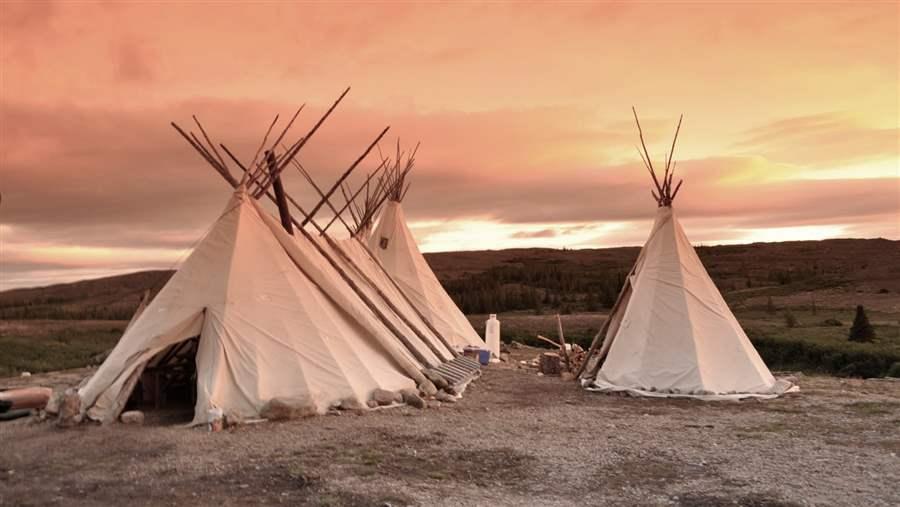 Indigenous tents at George River in the boreal forest of Canada.

Sophia Rabliauskas, a member of the Poplar River First Nation and part of the Pimachiowin Aki delegation, said the congress provides a great opportunity for delegates to connect with other indigenous peoples committed to conserving their traditional territories.

“I think we’re finding that if we come together as groups of people with the same concerns about our lands and the waters, we can make greater progress,” said Rabliauskas. “When I take part in gatherings like this, I want to try to find solutions on how to better our life and have a better future for our children.”

At the congress, Courtois will discuss Canada’s leadership on protected areas as part of a Nov. 15 panel on the contributions of indigenous and community conservation to global biodiversity targets.

Indigenous delegates from Canada will participate in a separate panel discussion about the importance of respecting and advancing traditional knowledge in the governance of protected areas.

As an example of that approach, the proposed Thaidene Nene National Park Reserve is to include a “Watchers of the Land” program, in which First Nation members are trained as stewards to protect the ecological and cultural integrity of sacred Dene sites. 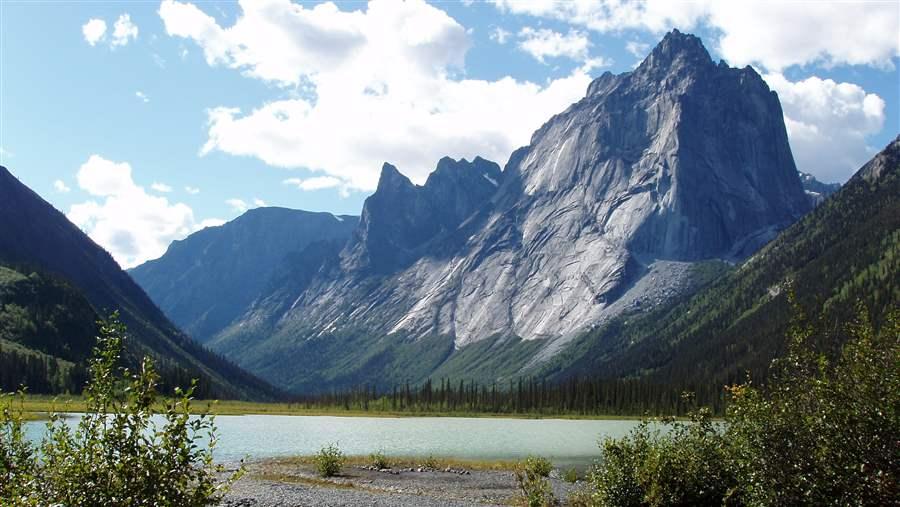 Nahanni National Park Reserve in Canada’s boreal forest region is one of several protected areas developed under the leadership of indigenous peoples. Nahanni is the traditional home of the Dehcho First Nations.

“It is our belief that ultimately the Pimachiowin Aki nomination will lead to an improved evaluation system that is more open to, and respectful of, the values of indigenous people,” Jacobson added.

Courtois said Canadian indigenous leadership on conservation has “exploded in the last 10 years.”

That’s due in large part to several legal rulings—starting with the Delgamuukw decision by the Supreme Court of Canada—that focused on the need for aboriginal consultation on land use decisions.

“Everything that has been developed as a conservation area in the Northwest Territories in the last 15 years has been done under indigenous leadership,” Courtois said.

The progress on conservation in Canada and the role played by indigenous peoples has the potential to benefit the entire planet, because the boreal forest rivals the Amazon rain forest in size and ecological importance.

It supports the world's most extensive network of pure lakes, rivers, and wetlands and captures and stores twice as much carbon as tropical forests, playing a vital role in helping to regulate the Earth’s climate.

“Because the boreal is such a globally significant forest, these conservation efforts will have a positive impact far beyond Canada,” Courtois said.

“If Canada can get it right on indigenous leadership, it’s even more of an indicator of success of the Canadian experience, which is one of inclusion and reconciliation between cultures,” she added.