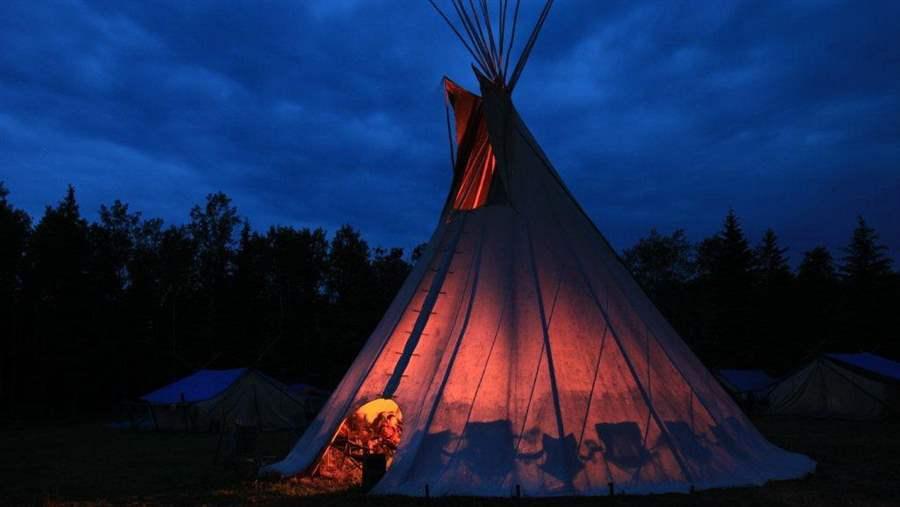 An Anishinaabe healing camp on the shores of Weaver Lake on Poplar River First Nation land in the boreal forest of northern Manitoba.

For millennia, the Anishinaabe people of Pimachiowin Aki, a proposed World Heritage Site in Canada, have shared the history of their culture and their land through stories.

Passed down through the generations, these oral stories have kept vibrant the memories of ancient burial sites, long-abandoned settlements, early travel routes, and age-old trap lines. They form the foundation of an indigenous culture so connected to its natural environment—the remarkable boreal shield—as to be indistinguishable from it.

“I have a story that I carry with me. We call it ‘creation story’ in English. It is the story of how our people got here, and what gave them that resilience to survive,” said Sophia Rabliauskas, a member of the Poplar River First Nation, a community of 1,200 people on the remote eastern side of Lake Winnipeg in northern Manitoba.

“It shows how people are inseparable from the land. We always believe that we are the land, and the land is so much part of us,’’ she continued.  “If we don’t have what’s around us—the land and our environment—and if we don’t take care of it, we wouldn’t survive as people.” 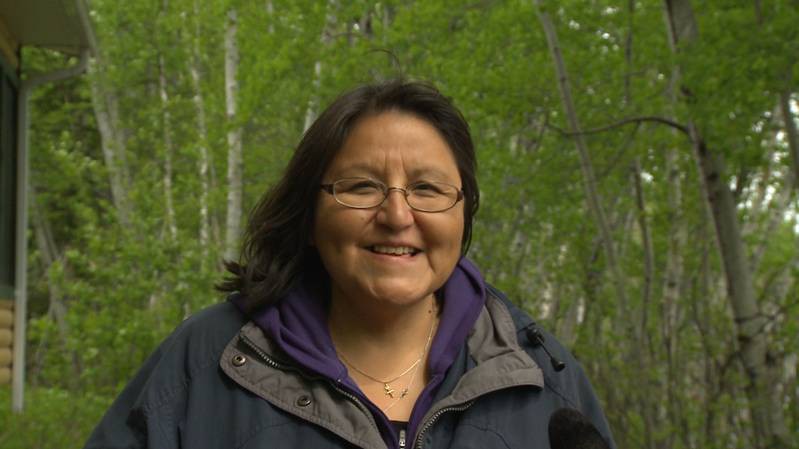 Rabliauskas is carrying this message to Sydney, Australia, this month for the World Parks Congress. She is part of a delegation promoting efforts by Poplar River and four neighboring First Nations—Bloodvein River, Little Grand Rapids, Pauingassi, and Pikangikum—to have Pimachiowin Aki declared a UNESCO World Heritage Site. The designation supports preservation of cultural and natural heritage sites deemed to be of “outstanding value to humanity.”

A central theme of the Nov. 12-19 congress is “Respecting Indigenous and Traditional Knowledge and Culture” in management of protected areas. Delegates will focus on the importance of recognizing the cultural and spiritual values of indigenous peoples in large-scale conservation planning.

Pimachiowin Aki means “the land that gives life” in the Anishinaabe (Ojibwe) language. Efforts to secure a World Heritage Site designation have played a key role in raising awareness about indigenous peoples and conservation.

In 2012, the government of Canada—on behalf of the five First Nations and the provinces of Manitoba and Ontario, the entities that make up the Pimachiowin Aki Corp.—submitted a World Heritage nomination to UNESCO.

Action was deferred in 2013 after the World Heritage Committee acknowledged “fundamental” issues with a decision-making process in which “cultural and natural values of one property are currently evaluated separately” in mixed nominations that stress both.

Pimachiowin Aki has served as a catalyst for an international debate that could fundamentally change how future World Heritage Site designations are evaluated.

At UNESCO’s most recent World Heritage Committee meetings in June in Doha, Qatar, delegates ordered a report seeking options to allow for the relationship between nature and culture to be ascribed value in the review process.

"There is a particular set of concerns around certain types of nominations that were really exemplified by the Pimachiowin Aki nomination that was considered last year…,” Tim Badman, director of the World Heritage Programme with the International Union for Conservation of Nature (IUCN), said during the meetings.

“I think that both those involved in the nomination, and those involved in the evaluation process, found it a somewhat traumatic process that asked some fundamental questions about how we work and that we really need to understand, particularly in territories of indigenous peoples when they are nominated by indigenous people for consideration by the World Heritage Committee.”

The committee had previously acknowledged that “maintaining entirely separate evaluation processes for mixed nominations does not facilitate a shared decision-making process,” referring to consideration of intertwined cultural and natural values of a nominated site. 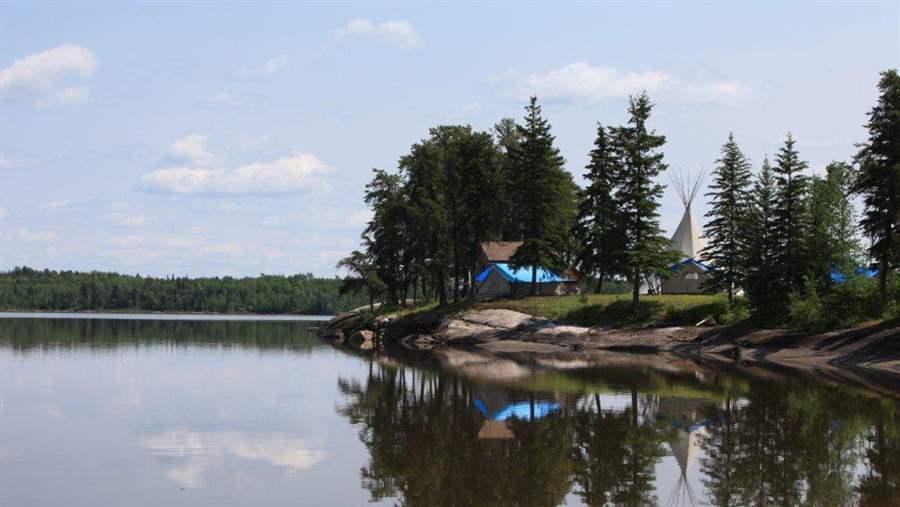 Members of the Poplar River First Nation in the boreal forest of northern Manitoba held a cultural camp at Weaver Lake in August 2014 that promoted their spiritual connection to their land.

In Poplar River, Rabliauskas teaches the Anishinaabe language to students from kindergarten through grade 6. In August, the community held a culture and language camp on the shores of Weaver Lake for other residents.

“Any human has hopes and dreams for the future of their children and their community. That’s the bottom line for this whole World Heritage project,” she said.

“You want to do something for your community, for your people, so they will continue to benefit from the riches of this land—not monetary riches, just the beauty of this land. You don’t see much of that in the world today. And it’s being threatened.”

Pimachiowin Aki’s delegation hopes to forge closer ties to indigenous peoples around the world by hosting a reception in Australia for indigenous delegates.

“We have to start working together with other indigenous groups,” Rabliauskas said. “We share the same planet. We’re not as isolated as we think we are. We are all affected by climate change. We are all affected by what’s happening in other parts of the world. If we can come together and work on things that will help our communities, and our planet, that will be a good thing.”

UNESCO’s deferral of Pimachiowin Aki’s nomination was disappointing for Rabliauskas, but she said everyone is ready to “forge ahead” with a revamped bid.

The participating First Nations have expended great effort in formally documenting a history of Pimachiowin Aki that, until recently, was mainly passed on through oral traditions and in cultural ceremonies.

“The Anishinaabeg who live in this region are a living, thriving culture. That’s why our nomination for Pimachiowin Aki is not just as a natural site, but a cultural one,” said Ray Rabliauskas, Sophia’s husband, a Pimachiowin Aki board adviser who will also travel to Australia. “Everything is tied together.”

The Pimachiowin Aki nomination is being revised with guidance from an advisory mission from the IUCN and the International Council on Monuments and Sites. It will be resubmitted in February.

The Pew Charitable Trusts, through its International Boreal Conservation Campaign, endorsed Pimachiowin Aki’s nomination and is supporting efforts to secure its designation as a World Heritage Site.

“It is our belief that ultimately Pimachiowin Aki will lead to an improved evaluation system that is more open to, and respectful of, the values of indigenous people,’’ Jacobson added. “It will help reintegrate people and their cultures into policies designed to protect the environment, rather than artificially separate them from it.”

It is located at the geographical heart of Canada’s 1.2 billion-acre boreal forest and straddles the provinces of Manitoba and Ontario.

Pimachiowin Aki is almost entirely in its natural state, and the vast majority of the nominated area is already protected from development. It forms a critical part of the world’s largest remaining intact forest and has global significance as a source of carbon storage and unfrozen freshwater.

Pimachiowin Aki is an outstanding cultural landscape. Stories of the past intertwine with the landscape and have been handed down over centuries. They remain an integral part of local cultural life.

The region embodies and reflects the cultural tradition of “Keeping the Land,” a set of beliefs, values, and practices that guide Anishinaabe relations with the land.

Archaeologists have discovered traditional hunting and cooking tools and have located ancient camps and pictographs on rock faces that date back 5,000 years.