With Congress out of session, we are recapping the National Wilderness Conference this month. The congressional update will resume in December.

Twenty-five years after the last national gathering of its kind, more than 1,200 participants met in Albuquerque, New Mexico, for the National Wilderness Conference. Advocates, academics, federal employees, volunteers, students, and other members of the public came together for five days to join in the capstone celebration to months of events around the 50th anniversary of the Wilderness Act.

A highlight of the conference was signing of the 2020 Vision by heads of the agencies that oversee the nation’s wilderness—Dan Ashe, Director of the U.S. Fish and Wildlife Service, Neil Kornze, Director of the Bureau of Land Management, and Tom Tidwell, Chief of the U.S. Forest Service. This memorandum of understanding sets forth shared goals to guide the stewardship of the U.S. National Wilderness Preservation System, including completing wilderness character inventories and conducting climate vulnerability assessments across the system.

“Even more important than looking back at the accomplishments of the great community of wilderness protectors is our commitment, demonstrated by the agency heads, to keep looking ahead, resolving to do a better job of taking care of our wilderness resource for the next 50 years and beyond,” said Mike Matz, Pew’s director of U.S. public lands.

Several speakers highlighted the role of wilderness and our responsibility to it. Senator Martin Heinrich (D-NM) opened the conference Oct. 15 before a standing-room-only crowd, urging the audience to “work for the generations we will never see and never know.” His colleague in the Senate, Tom Udall (D-NM), said, “The wilderness teaches us to pause, to see what is unchanging.” And Interior Secretary Sally Jewell remarked, “The best classrooms in the world are the ones untrammeled by man.”

It is always refreshing to hear such words from public officials about their appreciation for and commitment to protecting public lands in the United States. But maybe more valuable to the advocates in attendance were the conversations among participants—sharing stories and best practices with counterparts in different states, comparing field notes with wilderness managers, and connecting with others who are on the same mission. 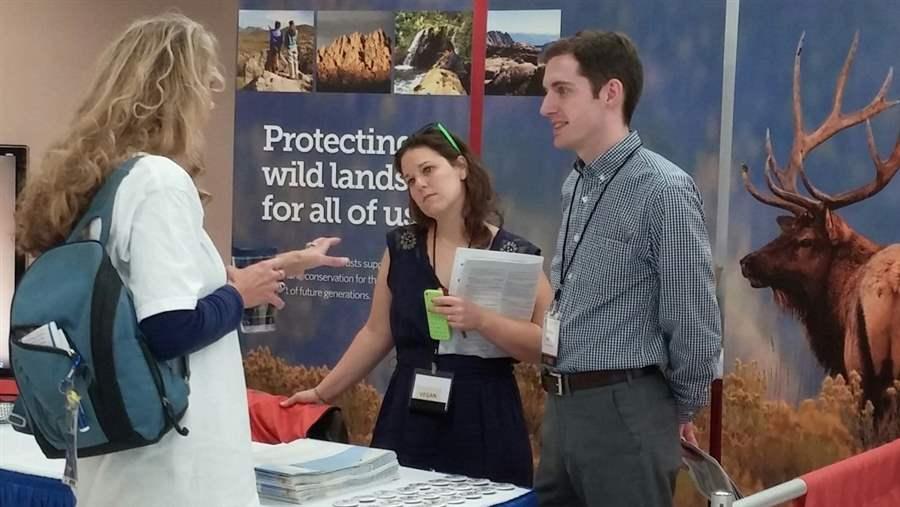 Pew staff exhibited our U.S. public lands work, which allowed us to meet attendees who stopped by to talk and ask questions. Many expressed surprise about the sheer size of the event and expressed how inspired they felt to be with so many like-minded individuals working to protect wilderness. Some of those we talked to included:

More than 75 sessions were held during the conference on topics ranging from the challenges of wildlife management in wilderness to strategies for laying the groundwork for the next 50 years. Pew’s public lands staff spoke on a number of panels, including one that addressed how to engage constituents in wilderness campaigns.

Author and historian Douglas Brinkley gave the plenary speech. He brought his young son to the conference and noted the importance of finding ways for children to engage and interact with the natural world.

The event was capped by a final message from Monica Patel, a fellow with the National Park Service: “When you go home, prove that you were in Albuquerque and make a difference for wilderness.”