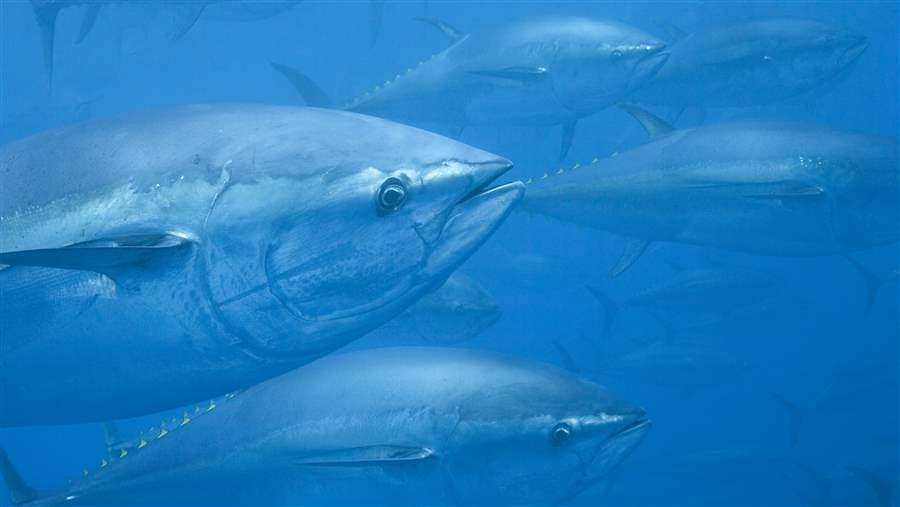 Atlantic bluefin tuna populations are on a path to recovery because of science-based catch limits, which must be enforced.

The latest scientific analysis suggests that the eastern Atlantic bluefin tuna population is finally on a path to recovery after years of overfishing and poor management. But these gains will be in jeopardy if fishery managers do not put effective controls in place to end illegal fishing and ensure that the actual catch does not exceed the science-based catch limits.

Because the European Union holds 59 percent of the quota, the future of eastern Atlantic bluefin rests, in large part, on the ability of the EU to effectively monitor and control trade of these fish across its borders.  As members of the International Commission for the Conservation of Atlantic Tunas (ICCAT) prepare to gather for their November meeting in Italy, here are four questions for the EU on illegal fishing of Atlantic bluefin.

1. How much illegal fishing of Atlantic bluefin is taking place in the Mediterranean Sea?

Although the exact extent of illegal fishing is unknown, there is no denying that such activity is taking place in the eastern Atlantic Ocean and the Mediterranean Sea. A study of trade data from 2008 through 2011 shows that actual catch of bluefin in those waters exceeded the set quota by 57 percent.  The illegal catch has continued since then. According to media accounts, 78 separate seizures were reported in Italy and Spain over the last year, in total amounting to 175 tons of illegally caught bluefin.1 Because illegal fishing takes place in the shadows of legitimate markets and often skirts the reach of monitoring and enforcement efforts, these reports probably capture just a fraction of the illicit activity in this fishery.

2. How does illegally caught Atlantic bluefin make it to the EU marketplace?

Currently, fishermen, traders, and enforcement officers must rely on an outdated paper-based tracking system to determine whether fish are caught legally. Copies of these forms are supposed to travel with each bluefin from capture to point of sale.  However, ICCAT has recognized the shortcomings of the paper system, which has proved ineffective and rife with gaps and loopholes that allow illegal fish into the marketplace. Authorities have seized bluefin accompanied by forged documents, and a year can pass before verified forms are entered into ICCAT databases.  In 2010, ICCAT agreed that the system needed an upgrade to an electronic-based documentation program (eBCD), but implementation has been delayed repeatedly. This transition is now scheduled for March 2015.

Fisheries officials also must deal with enforcement challenges presented by the ranching of bluefin tuna.  Tuna ranching, which is widespread in the Mediterranean, entails catching bluefin and then transporting them to floating pens, where they are held and fattened before being killed and sent to the market.  According to reports, these ranching operations are a main pathway for illegally caught bluefin to reach the supply chain.  Each step is supposed to be monitored by observers, but estimates are often imprecise. In addition, a video monitoring system has not moved beyond the trial phase, even though such a system would greatly improve counting accuracy.

3. Does the EU still support a robust electronic tracking system for all bluefin?

The EU has been a leader and champion in the development of the electronic tracking system to curb illegal catch and trade of Atlantic bluefin.  However, this support seems to be wavering.  Such a change would have dire implications and could stall the recovery of the eastern Atlantic bluefin population.   In May, in response to a reporter’s question about whether the EU still supported full implementation of the electronic system, a European Commission representative said, the commission was “of course, aware that an electronic system would make controls much tighter, but in the absence of such a system, a paper-based scheme is better than no system.” However, the paper-based scheme has proven highly ineffective at curbing illegal catch and trade. Continued use of this outdated approach, instead of the electronic system that ICCAT parties have committed to implementing in 2015, would hamper recovery of the species.

At ICCAT’s intercessional meeting in March, the EU proposed elimination of the requirement that fish traded across EU member state borders be tracked by the eBCD.  Instead, this trading would continue to be tracked using the old paper forms.  If use of the eBCD for trade between EU states is not required, illegal operators would be able to move fish around the EU with greater ease. That would broaden the black market and increase incentives to catch Atlantic bluefin illegally. The bottom line:  To date, the paper system has not worked to curb illegal fishing sufficiently so why support it as a mechanism to do so for the future?   An electronic tracking system that adequately closes the loopholes for illegal fish to enter the EU market is still urgently needed.

4. What is the EU position for the upcoming ICCAT meeting?

The most critical question, then, is what the EU will say and do about Atlantic bluefin at the ICCAT meeting in November in Genoa, Italy. The EU is arguably the major player in the management of the bluefin fishery in eastern Atlantic and Mediterranean waters. Not only will the EU probably influence the positions of other ICCAT members, but it also is responsible for a huge portion of the catch and trade in this species.

1 Based on a review of media reports (from January 2013 through May 2014) by the Pew Charitable Trusts, in cooperation with MedReAct.org.