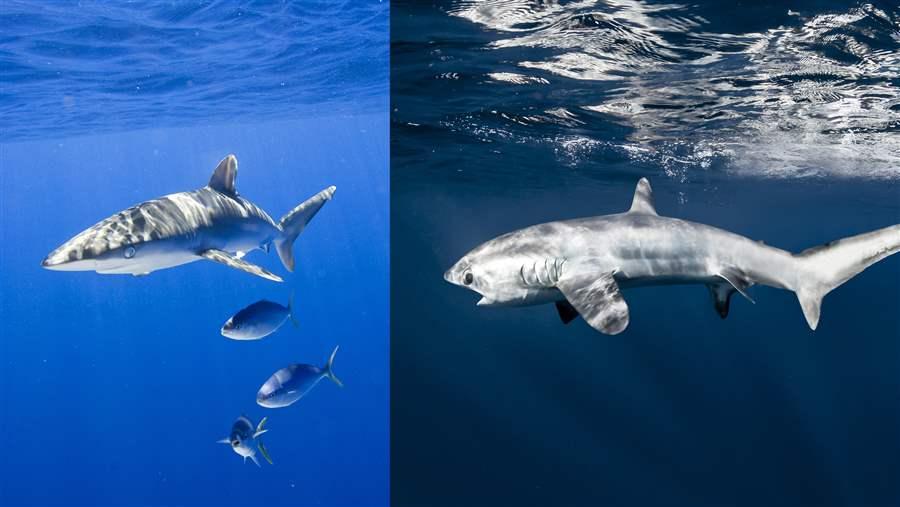 The silky shark, left, and the thresher shark are at risk. About 100 million sharks, an unsustainable number, are killed in commercial fishing every year.

Sharks don’t consult maps. They don’t carry passports. No border agents patrol as they embark on long migrations across the high seas and between countries.

Sadly, this unfettered globetrotting is one of the reasons sharks worldwide are heading toward extinction. It is difficult to protect species that travel so far and so unpredictably. Many large migratory shark species are now endangered. About 100 million sharks, an unsustainable number, are killed in commercial fisheries every year.

But there are ways to help these critical ocean predators, which have been around longer than dinosaurs or even trees. Governments around the world have started to take action. Some, such as Palau and the British Virgin Islands, have led global shark conservation by declaring sanctuaries that protect all sharks within their waters. Others have helped put in place landmark intergovernmental trade protections through CITES, the Convention on International Trade in Endangered Species of Wild Fauna and Flora. These new rules took effect Sept. 14, 2014. 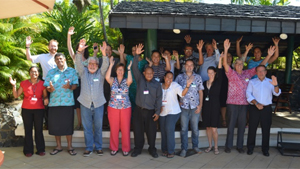 Delegates celebrate the opening of a pre-CMS meeting in Fiji.

In November, nations can add to this momentum at the meeting of the U.N. Convention on the Conservation of Migratory Species of Wild Animals (CMS). CMS is the only global convention that specializes in the conservation of migratory species, their habitats, and their migration routes.

Made up of 120 countries, CMS fosters intergovernmental cooperation to reduce the decline of these species and boost conservation measures throughout their range. The theme of this year’s meeting is “Time for Action!” and a coalition of shark champions—Egypt, the European Union, Costa Rica, Ecuador, and Fiji— have joined together to propose that 21 species of shark, mobula ray and sawfish (sharks’ less-toothy cousins), receive protections.

Although all sharks need help now, these governments have identified thresher, silky, and hammerhead sharks as among those most at risk. Some of these species are already as endangered as tigers, rhinoceroses, and blue whales.

Scientists continue to learn about these iconic species. For example, they still aren’t certain why hammerhead sharks have their strange hammer-shaped heads and discovered only last year that thresher sharks use their long tails as an Indiana Jones-style whip when hunting.

Key decisions on whether to protect these sharks will be made high in the Andes Mountains in Quito, Ecuador, when CMS member governments meet Nov. 4 to 9, 2014. 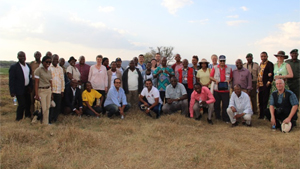 Pew’s global shark conservation campaign has traveled the world ahead of the meeting, providing science-based policy advice to governments as they prepare to make these decisions in Quito. From landlocked Zimbabwe to the beautiful islands of Fiji and the Pacific Ocean coast of Chile, governments have been coming together in regional groups to get a better understanding of why action is needed to protect sharks now. Pew’s experts have been there to provide advice, science, and support.

As a result, Latin America, the Pacific, and Africa offer strong support for shark conservation action at CMS, and this might be the lifeline these species need to survive.

Many governments have looked at the evidence and seen the bottom line: Whether for tourism or the environmental benefits they bring, sharks are worth more alive than dead and used for steaks, fish and chips, or shark fin soup. 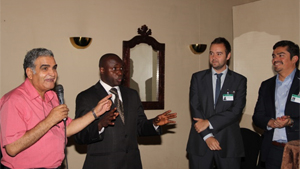 Pew's Luke Warwick (second from right) meets in Zimbabwe with members of the Egyptian government to discuss sharks.

Officials also have realized that these species, much like top predators on land, play key roles in marine ecosystems. For example, scientists have found that tiger sharks in Shark Bay, Western Australia, have positive effects on the amount of sea grass growing on the seafloor. Without sharks, turtle populations increase. The turtles then overgraze the sea grass beds. That can lead to loss of the fish and invertebrates that rely on the sea grass meadows. With sharks present, the turtles avoid overgrazing. That in turn benefits fishes and invertebrates that depend on healthy seagrass meadows. In short, sharks help maintain ecosystem balance.

Governments have also realized that action is needed. But will the parties to CMS – from Argentina to Austria, the Philippines to Tanzania, Mongolia to Samoa – put geographical and political differences aside and realize that “time for action” isn’t just a motto for this conference? Now is the time for these governments to work together and make a clear statement to help save the world’s sharks and rays from extinction.