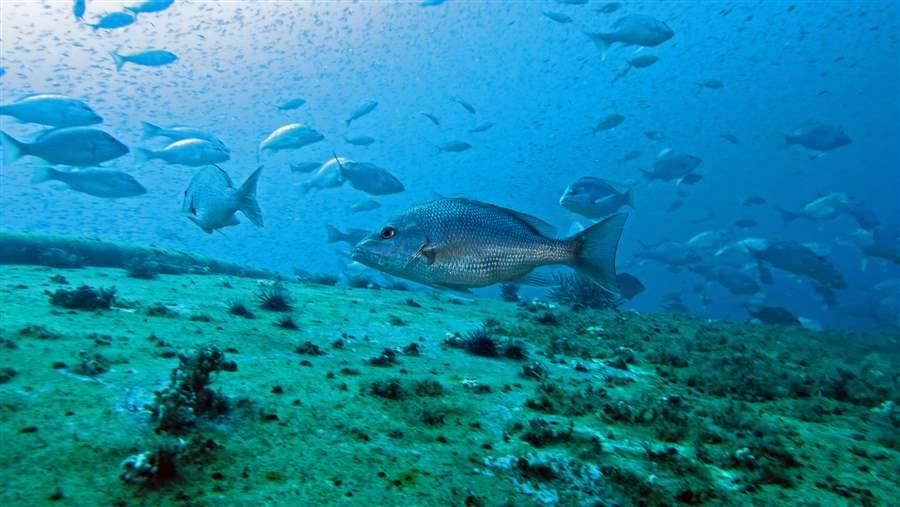 Red snapper in the Gulf of Mexico.

Anglers headed to the Gulf of Mexico often share a favorite target—red snapper. But this very popularity creates two problems: First, there’s a lot of fishing with not enough fish. And second, because it’s difficult to count the total caught by millions of individual anglers, fisheries managers have a hard time ensuring the total catch is sustainable.

We all want to enjoy red snapper, but these problems threaten recovery of a species that is making significant strides after decades of overfishing. For years, recreational anglers as a group have been catching more fish than federal regulators allow—sometimes millions of pounds more annually. Fortunately, the Gulf of Mexico Fishery Management Council is considering a proposal this month to keep better track of red snapper caught recreationally in federal waters. Achieving this goal would help keep anglers within their annual quotas, which in turn would aid the fish population in returning to a fully healthy level.

The council’s plan would split the recreational catch in federal waters between charter boat captains, who run businesses taking anglers out to fish, and people who fish from privately owned boats. The two groups differ in how and where they are allowed to fish, and those differences affect the ease of monitoring their catches. The new proposal, known as Amendment 40, recognizes that a one-size-fits-all approach is not effective and that rules should be tailored accordingly.

About 1,300 charter boat captains taking customers fishing in federal waters have permits to take red snapper from the Gulf but aren’t entitled to a specific number of fish. In recent years, charter businesses have lost money from canceled trips when fishery managers shortened the red snapper fishing season because too many fish were being caught by all recreational anglers, including those who fish from their own boats.

Fishing by private recreational anglers is far more difficult to track, with millions of anglers taking millions of fishing trips each year. Phone surveys, sampling catch at public marinas, and other state-based programs are among the tools regulators use to estimate catch. But many anglers return to private docks where no one counts what they bring in.

The new plan would give the group of charter captains a set amount of fish and, in exchange, they would be responsible for staying within the total quota. They would then benefit because they could more reliably plan trips for their customers.

Future management plans could refine the reporting further, using electronic devices like smartphones or tablet computers. Combined with more scientific information from biologists who sample fish at the docks, such a system could feed information to fishery managers more quickly than current methods. And faster information means more timely decisions about catch amounts and staying within quotas.

Furthermore, managing private anglers separately could actually extend the red snapper season. For instance, federal fishery managers are considering a proposal to let state fisheries managers in the five Gulf states decide when to open the red snapper recreational season and how many fish each angler can keep. These managers might adopt weekends-only fishing to stretch out otherwise short fishing seasons.

Another option would issue red snapper harvest tags, allocating a specific number of fish to be caught by individual anglers whenever it’s convenient, not just during a fixed season. This would more effectively control the catch and significantly improve information about it.

The bottom line is that counting fish more effectively means alleviating escalating tensions over the best ways to manage red snapper fishing and giving fisheries managers better information to help keep the population healthy. A new approach has the potential to stave off chronic overruns of the recreational quota, bringing more order and greater sustainability to red snapper fishing in the Gulf.