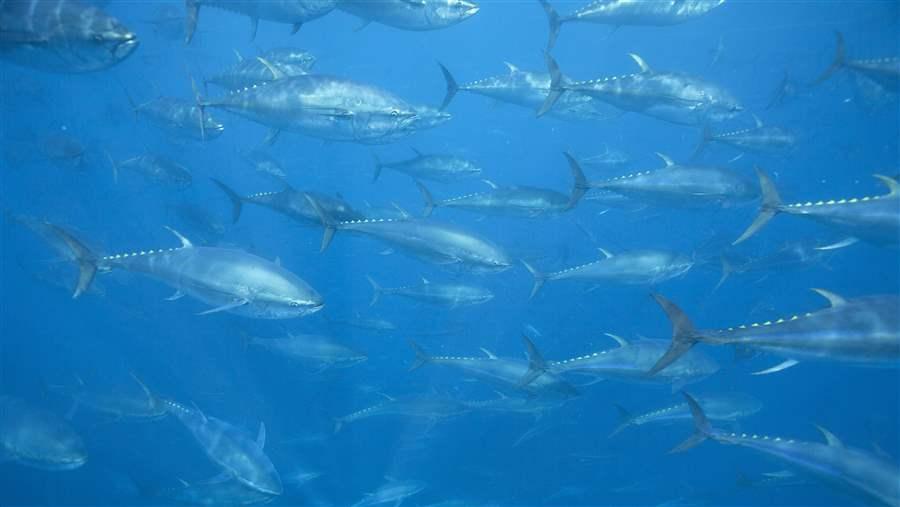 Atlantic bluefin tuna may be getting the break they need after years of overfishing and poor management. New evidence suggests that the species is beginning to bounce back from near collapse of the fishery—at least for now. That’s the good news. The bad news is that the gains could be lost if fishery managers take risky leaps, rather than responsible, cautious steps.

Great uncertainty remains about the extent of the Atlantic bluefin’s recovery, according to an updated scientific assessment released Sept. 9, 2014, produced by the Standing Committee of Research and Statistics (SCRS) of the International Commission for the Conservation of Atlantic Tunas (ICCAT). That means there is also considerable uncertainty about how many more fish could be caught without reversing recent population increases. So now the international effort to save Atlantic bluefin from collapse must turn to ensuring its full recovery—despite pressures to increase current catch limits.

When ICCAT members meet in Italy in November with the latest scientific information in hand, they should make the precautionary choice and maintain limits at current levels.

The western population of Atlantic bluefin tuna spawns in the Gulf of Mexico and feeds in the North Atlantic, primarily off the coast of North America. This population has remained at low levels for more than three decades, in part because each time there was evidence of population growth, ICCAT managers agreed to raise the annual quota, a step that undid any gains. The current quota is 1,750 metric tons, which is caught primarily by the United States, Canada, and Japan.

The new SCRS assessment indicates that the western population is showing signs of growth, though scientists can’t determine precisely how much rebuilding has really taken place. They warn of major uncertainty regarding the updated estimate, and the report cautions that “the conclusions of this assessment do not capture the full degree of uncertainty in the assessments and projections.” In its executive summary, the science committee goes on to mention this uncertainty six more times in the section about the western population.

So, should fishing nations increase the quota from 1,750 metric tons a year? The answer is a definitive no. The management advice provided by the SCRS suggests that catches of “less than 2,250 metric tons” have only a fifty-fifty chance of increasing the population’s size by the 2019 rebuilding deadline. In other words, it is just as likely that such an increase will lead to population loss. The SCRS report says that maintaining the current quota would ensure that the population continues to increase—and at a faster rate than it would under a higher quota—and help to reduce some of the uncertainty in the assessment model.

“There are only five years left in the rebuilding plan for western Atlantic bluefin, and there is still likely to be a long way to go to recovery. Now is not the time for risky decisions,” said Amanda Nickson, director of global tuna conservation for The Pew Charitable Trusts. “Instead of giving in to pressure to raise the quota at the first hint of increased abundance—albeit a very uncertain increase—fishery managers should follow the scientific advice to maintain the quota in order to lock in recent growth and improve the chance of a recovery for the western population.”

The eastern population of Atlantic bluefin is much larger than the western, a fact reflected in the much higher current quota of 13,400 metric tons. These tuna are caught primarily by members of the European Union, with Morocco, Japan, and other countries catching much smaller shares.

The updated assessment suggests that the eastern population has grown significantly since the ICCAT rebuilding plan was put in place in 2010 and is on its way to recovery. Still, the scientists warn that the assessment results also come with a problematic level of uncertainty. That means the extent of the population increase cannot be precisely determined. The word “uncertainty” is used 10 times in the eastern bluefin section of the executive summary.

The SCRS then offers equally murky management advice. While the scientists state that maintaining or gradually and moderately increasing the quota would not jeopardize the recovery, they could not agree on how much of an increase eastern bluefin could withstand in 2015 without jeopardizing rebuilding. The advice also fails to take into account illegal fishing and its potential impact on the recovery, something fishery managers should not ignore.

While some ICCAT members will use the terms “gradual” and “moderate” to justify calls for quota increases, any proposed boost for 2015 is arbitrary, given that scientists could not agree on an increase that would not undermine the recovery. Without clear scientific guidance on a safe level of increase next year, the best option is to maintain the current quota in accordance with the lower bound of the information provided by the scientific advice.

“Pew’s fundamental concern is that management decisions for 2015 are made in a precautionary manner, so the recovery of this population can be fully realized,” Nickson said. “It was only five short years ago that this population was in real trouble. It would be utterly irresponsible and out of line with the scientific advice to raise the quota by 70 percent in one year, as some countries are already demanding.”