ABOARD THE RESEARCH VESSEL BRAVEHEART— Being surrounded by this vast expanse of the Pacific Ocean with no land in sight for days is a humbling experience. It drives home just how much of our planet is covered in ocean: 71 percent.

I tend to think that these waters are still, but being out here for days as our expedition crew travels from New Zealand to French Polynesia reveals they are anything but. We have had good weather, but the ocean still moves constantly. Waves and swells push us about and make the ship pitch and roll. 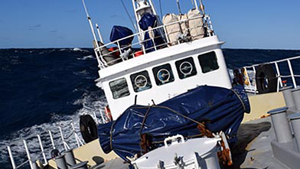 More broadly, large-scale oceanic currents never stop moving, driven by the wind and the spinning of the Earth.

Here in the South Pacific, one large current circles counterclockwise, connecting everything and everyone it touches. Known as the Peru Current, it starts as an eastern boundary current—meaning it is on the eastern side of the South Pacific Ocean basin—and then moves in a south to north direction up the coast of South America.

As the Peru Current nears the equator, it begins to move west—thanks to the southeast trade winds—to become the South Equatorial Current, which crosses the entire Pacific. Once this current reaches the western boundary of the South Pacific, the landmasses of Indonesia and Australia force it south toward New Zealand. As the current moves south, the Earth’s spinning and the winds known as the Roaring Forties—the Southern Hemisphere “westerlies”—begin to push it back across the South Pacific basin in the south. This circulating effect is known as a gyre. 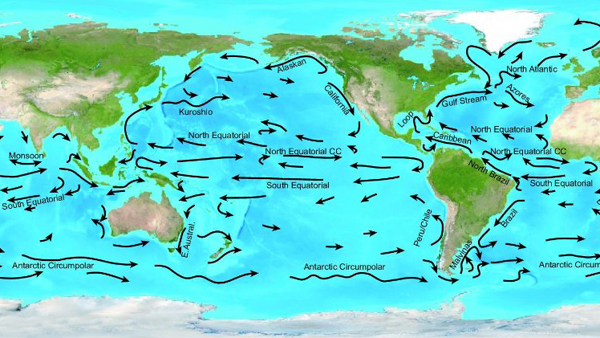 Ocean surface currents of the world

The currents of the South Pacific gyre flow past the many islands and reefs in these waters and serve as the great connectors within the region. Many species that live on coral reefs do not move far from their “home” reef. Marine animals such as corals are fixed in one place.

When these same species are found at different reefs or islands far from one another, they must have had some means of transport. Most have had a pelagic stage in their life history, meaning they were either free-swimming or could drift in open ocean away from their home. Many have a pelagic larval stage, during which eggs or larvae are released into the ocean. They get caught in the currents and carried far away. This pattern explains why the same species can be found at different islands far from one another, across vast stretches of ocean.

We are nearing French Polynesia and will soon start documenting the life in island waters there. The great connectivity caused by the currents among different islands in the South Pacific is one of the reasons we are undertaking this trip.