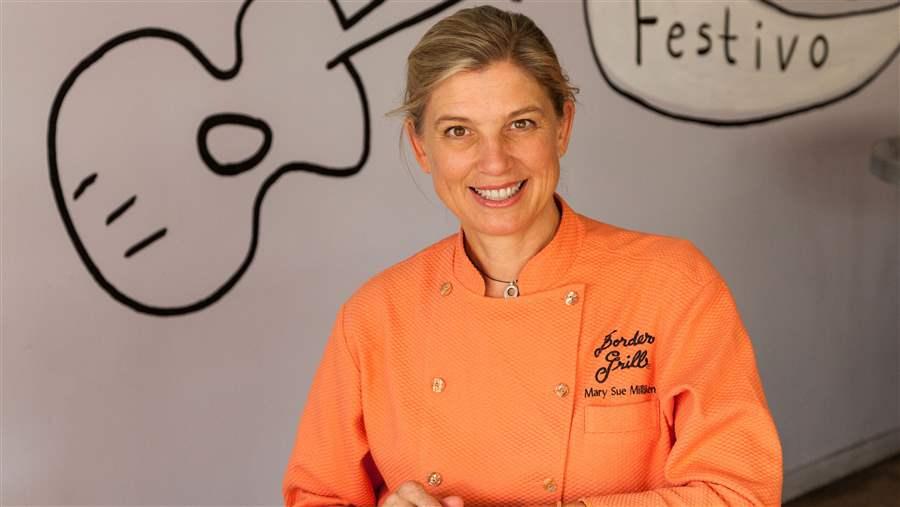 Mary Sue Milliken is co-chef and co-owner of the Border Grill restaurants and food trucks in Los Angeles and Las Vegas. She is the author of several cookbooks and is also a television personality who has appeared on “Top Chef Masters,” “Today,” and hundreds of episodes on the Food Network with her business partner of more than 30 years, Susan Feniger.

Milliken operates her business with an eye toward protecting the environment, including use of organic fruits and vegetables, meats grown without antibiotics, and lesser-known varieties of sustainably caught seafood. She has also become active in supporting efforts by The Pew Charitable Trusts and other organizations to encourage West Coast fishery managers to improve conservation of forage fish as a key component of a healthy ecosystem.

Sustainable seafood is a cause she has always been passionate about. However, she became increasingly aware of the need for change about a decade ago at Monterey Bay Aquarium’s annual Cooking for Solutions event.

During a recent conversation at her restaurant’s downtown Los Angeles location, she recalled the moment when she decided to get deeply involved in the sustainable seafood movement and detailed why she believes people should become more engaged in advocating for ocean conservation.

Q: What was it about the Monterey event that resonated with you?

A: It was a conference pairing chefs with marine biologists and oceanographers who explained that 90 percent of large fish have disappeared from the world’s oceans and that chefs have a role in helping people make sustainable choices. I thought, “That is horrifying! I have two kids, and hopefully I’ll have grandkids. What if they can’t enjoy eating fish?” I realized that, as consumers, we have an enormous impact on the world's seafood supply, and I’ve been passionate about sustainable seafood ever since.

Q: How much difference can chefs make?

A: The vast majority of all seafood consumed in the U.S. is eaten in restaurants, so chefs can have a big impact on influencing people to choose more sustainable fish. If I can make smaller fish from lower on the food chain sexy, that’s a great win.

Q: Speaking of eating down the food web, you’ve made a point of occasionally serving sardines and squid—two species caught right here off the California coast. What do your customers think of nontraditional seafood like sardines?

A: All the foodies love them and order them right away, but other people say, “I want my chicken taco.” I actually think eating tuna should be something you do once a year and that we should encourage people to eat little fish like sardines, herring, and mackerel. They’re high in Omega 3 oils and low in pollutants like mercury. Right now, much of the sardine catch in the United States ends up in fish oil capsules or as commercial bait or feed for larger farmed species like salmon. That’s not what I’d call the best use of resources; it takes about three pounds of sardines to raise just one pound of salmon.

Q: You have also advocated for forage fish conservation. How do you square the need to conserve forage fish with your desire to eat them?

A: Forage fish are sort of the building blocks of an ecosystem. Those little forage fish are like the topsoil of the ocean. We need to conserve forage fish, because so many other animals depend on them. At the same time, if we’re going to feed a growing population efficiently, we should be eating lower on the food chain.

Q: Has your willingness to source sustainable food helped or hurt your business?

A: Being part of the sustainability movement has been very beneficial and rewarding for our business: Customers come here because of it. We’ve also got 450 employees, and we know that when they feel good about the work they’re doing—that it’s about more than just a paycheck for them—our retention is higher.

Q: It’s one thing to undertake sustainable practices for your business, but you’ve gone a step further and advocated conservation of marine resources through the Pacific Fishery Management Council and other bodies. Why have you chosen to get involved in the policy arena?

A: There’s only so much each individual consumer can do. Even though most of the world is covered by water, the ocean is always going to need more advocates because it’s not familiar to most people. We don’t live under water; we live on land. So it’s easier for people to hop on the bandwagon for water conservation or clean air or trees than it is to support the health of the oceans. The oceans are still very mysterious, but thinking logically, their health has got to have an impact on our health.