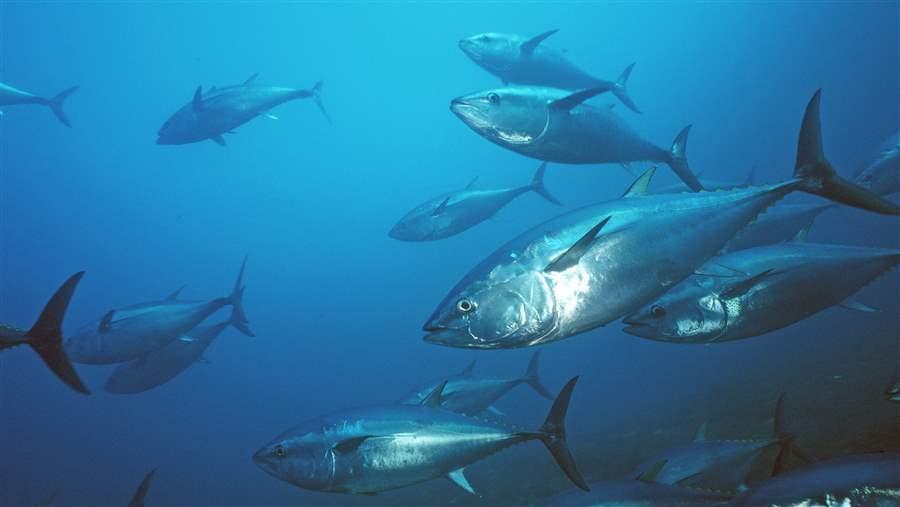 Pacific bluefin swim in the ocean.

As members of the Northern Committee of the Western and Central Pacific Fisheries Commission gather in Fukuoka, Japan, this week, The Pew Charitable Trusts is once again calling for stronger management of the depleted Pacific bluefin tuna population.

The committee, which focuses on fisheries in the northern Pacific waters governed by the regional fisheries management organization, meets Sept. 1 to 4 and will make recommendations for the WCPFC to consider at its meeting in early December in Samoa.

The latest assessment by the International Scientific Committee for Tuna and Tuna-like Species in the North Pacific Ocean (ISC) found that the Pacific bluefin population has dropped 96 percent from its historic size—with steady declines over the past 15 years.

Today, the smallest fish, juveniles, make up nearly 98 percent of the total catch, which means that most have not had a chance to reproduce and contribute to future generations. Additionally, the assessment projects that current management measures will not lead to an increase in the population.

Without immediate action at this year’s Northern Committee meeting, the status and future of Pacific bluefin tuna will continue to worsen,” said Amanda Nickson, Pew’s director of global tuna conservation.

To ensure that the population is able to rebuild in a timely manner, Pew has urged the Northern Committee to recommend that the WCPFC adopt a management measure that includes these science-based elements:

In the eastern Pacific, the Inter-American Tropical Tuna Commission is responsible for managing bluefin tuna. When members of that commission met in Peru in July, they did not reach agreement on a measure to protect these fish, and they put off a decision until October.

Nickson warned that tougher measures would be needed if the commissions do not follow the clear scientific guidance.

The members of the Northern Committee have a responsibility to act to help reverse the decline of the Pacific bluefin population and set the species on the path to recovery,” said Nickson.  “However, if the Western and Central Pacific Fisheries Commission and the Inter-American Tropical Tuna Commission do not act this year to reduce fishing mortality of Pacific bluefin tuna in line with scientific advice, the only other management options available would be a basin-wide fishery suspension or trade restrictions.”