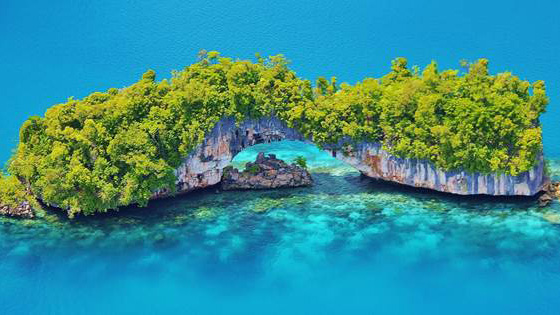 An aerial view of Palau.

The ocean is in trouble. Water temperatures are rising while once booming populations of fish and other sea life are shrinking. Large swaths of the high seas go unprotected, with little legal framework to guard international waters against the dangers of overexploitation. Even when regulations exist, they are difficult to enforce. In the Palau Declaration on "The Ocean: Life and Future," issued after a meeting of the Pacific Islands Forum held from July 29 to 31, Pacific island leaders warn that it’s not just the ocean that’s in peril; people are in harm’s way, too.

"In our lifetime, a dangerous combination of human impacts has come to threaten the foundation of our Pacific livelihoods, which centers largely on the Pacific Ocean, and indeed those of the rest of the world," the declaration cautions, pointing to a marine ecosystem weakened by poor fishing practices, pollution, and damaging industrial extractions.

In our lifetime, a dangerous combination of human impacts has come to threaten the foundation of our Pacific livelihoods, which centers largely on the Pacific Ocean, and indeed those of the rest of the worldPalau Declaration on "The Ocean: Life and Future"

"Compounding these pressures, global carbon dioxide (CO2) emissions are contributing to ocean warming, more frequent and extreme weather events, sea level rise and acidification, and potential loss of territories present the greatest threat to the livelihoods, security and well-being of the peoples of the Pacific and one of the greatest challenges for the entire world," the declaration continued.

"The Palau Declaration, adopted during the 45th Pacific Islands Forum, is a stark warning about the growing insecurity facing coastal nations," said Joan Yang, senior officer for international ocean policy at The Pew Charitable Trusts. "It is also a reminder of the opportunities that must be seized in order to overcome these potentially life-altering challenges."

Scientists have demonstrated that marine reserves play a role in rejuvenating ocean life. For its part, Palau, a small island state of 22,000 people with a vast ocean backyard and the forum’s host country, has proposed creating a national sanctuary to protect marine life. The plan calls for closing off 80 percent of its national waters to fishing while allowing a small, domestic industry to fish sustainably in a designated zone. This conservation approach makes long-term economic sense for the country, where ecotourism revenue far outpaces that generated by fishing.

"We need to do something," Palau President Tommy Remengesau Jr. said during an event co-hosted by Pew. "Enough talk, enough research, enough debate. Enough focus solely on economic debates. It’s about time we find solutions to the problems and the challenges facing the Pacific."

There is no one-size fits-all approach to conservation, and closures are only one element of ocean conservation. But the Pacific island leaders in attendance agreed that "effectively implementing marine protected areas will provide global and regional benefits."

Read more about the role of marine reserves in ocean conservation.

Sustainable fishing remains a vital component of the Pacific islands region and its economy, even as new marine protected areas are proposed. The revenue generated by the tuna industry alone is in the billions of dollars and benefits virtually every island nation. To secure marine resources for future generations, fishery management practices need to be based on sound science and precautionary quotas.

Whether an area of the ocean is open or closed to fishing, the impacts of illegal, unreported, and unregulated (IUU) fishing threaten any conservation measures that may be in place. In the Palau Declaration, leaders note:

"IUU fishing robs the Pacific of its development opportunities, reduces revenue from fisheries, undermines investment and employment opportunities and threatens the sustainability of fish stocks. … We call on regional and global partners, including civil society and the private sector, to work with members and the Forum Fisheries Agency [FFA] to evaluate and implement appropriate solutions to address IUU and associated significant loss of fisheries earnings to Pacific Island countries."

The Pacific Islands Forum Fisheries Agency is a leading example of countries working together to deal with the challenge of IUU fishing. Many nations are increasing their efforts to deter illegal fishing by identifying vessels that break the rules and bringing them to justice through improved regional coordination on patrols, monitoring, and surveillance. Countries are also employing technology to track the use of specific fishing gears.

The ocean and fisheries are critically important to sustainable development and are particularly relevant to food security, employment, and poverty eradication. As the United Nations considers a list of sustainable development goals to succeed the millennium development goals, it is essential that it include a dedicated ocean goal. This would formally recognize the fundamental dependence of all life on a healthy global ocean and the need for cooperation between all nations and peoples on responsible stewardship of this common resource.

While Pacific nations may have relatively little land, their exclusive economic zones offshore make them "big ocean states." Leaders endorsed a "comprehensive, effective and implementable stand-alone Oceans Sustainable Development Goal" at the United Nations and said it would be a central priority during the 2014 International Conference on Small Island Developing States to be held this September. This endorsement follows the June recommendation from the independent Global Ocean Commission on the need for a stand-alone sustainable development goal for the oceans.

Although Pacific island countries can manage ocean activity in their own waters, there is no mechanism to allow management and coordination of most activities in areas beyond national jurisdiction. Of particular note is the fact that no system is in place to establish marine protected areas on the high seas. Countries are now discussing whether to begin negotiations for a new United Nations legal agreement on this issue. The deadline to agree to such negotiations was set by world leaders at the Rio+20 Earth Summit in 2012. Forum leaders declared support for "launching negotiations by September 2015 for an International Agreement under the United Nations Convention on the Law of the Sea on the conservation and sustainable use of marine biological diversity of areas beyond national jurisdiction."

Read more about protecting ocean life on the high seas.

Pacific island leaders also asked for support from governments, civil society, and nongovernmental organizations through the development of partnerships.

"I can stand here and talk about all of the wonderful things that we’ve done on our own to meet our obligations to climate change and to conservation, but until that partnership between resources and need is actually hooked up, we still have a lot of work to do," said Tony deBrum, minister in assistance to the president of the Marshall Islands.