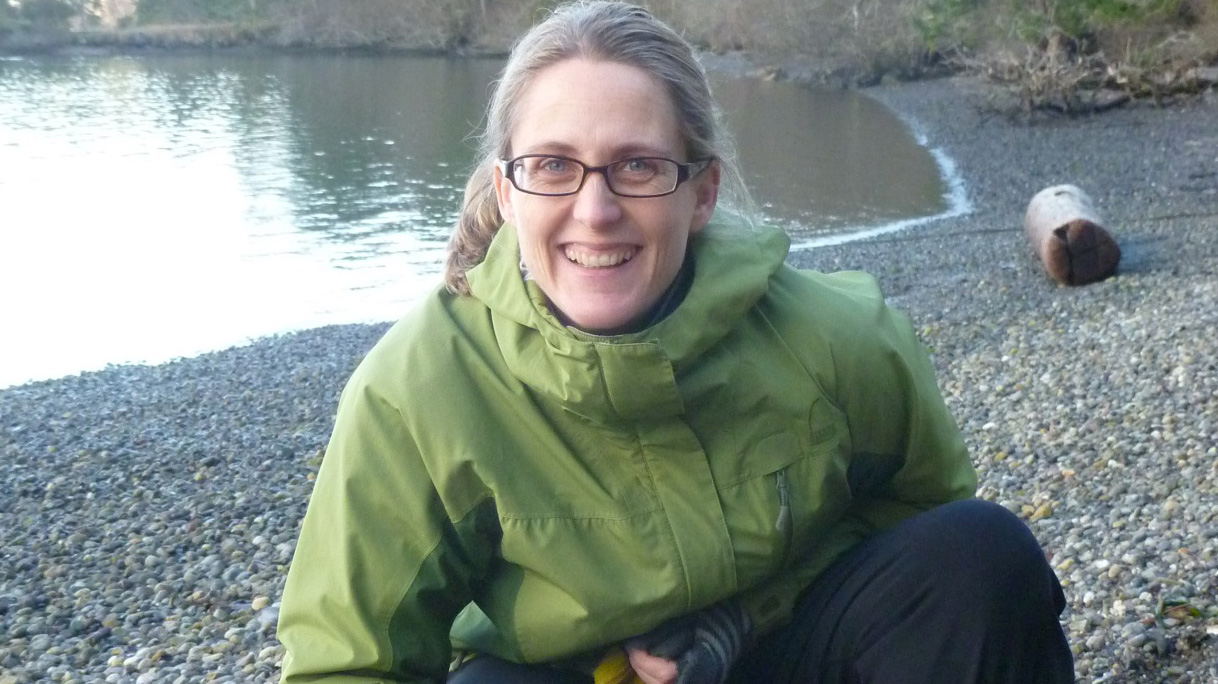 Tina Whitman has spent most of her life around islands and now works to protect forage fish and the habitat they depend on in Washington state’s San Juan Islands.

For the past 12 years, Tina Whitman has worked as science director of Friends of the San Juans. The nonprofit organization focuses on protecting the unique natural environment that characterizes one of the premier visitor destinations on the West Coast of the United States.

Growing up on the island of Martha’s Vineyard in Massachusetts, Whitman developed a fascination with marine life. She learned to fish and boat from an early age. After four years of studying environmental design at the University of Colorado, she came home to observe shorebirds on the barrier beaches of Nantucket and the Vineyard, an experience that solidified her interest in a career in shoreline conservation. Whitman earned her master’s degree in environmental studies from the University of Oregon and then met her husband, a native Oregonian, and decided to put down roots in the Pacific Northwest.

Q: What is it about the marine environment that captivates you?

A: I think it’s almost more of an island thing than the marine environment. When you’re on an island, you know right away that there are limits because you’re disconnected from all of the mainland stuff, such as big-box stores. You have a sense of community and place that’s just so obvious and a strong connection with the natural world. And the San Juans are special because the ocean environment is really visible here—the salmon, the orca whales, a lot of other marine mammals.

Q: Why has Friends of the San Juans prioritized conservation of forage fish habitat, such as beach spawning areas for surf smelt?

A: I have really enjoyed working to safeguard forage fish; they’re such an integral part of the food web. They are also an amazing tool to illustrate the land-sea connection that is so crucial. On the East Coast, forage fish tend to lay their eggs below the waterline, but here they’re depositing them in the sand close to shore. They could be spawning 100 feet from your house. That proximity is also why they need organizations like ours that advocate for their protection. The other thing I really like about forage fish is the common bond that so many people share with them. Whether you’re a commercial or recreational fisherman, a birder, or a whale-watcher, there is a connection to the importance of forage fish. All of those things are really dependent on the small fish and their place in the food web. It’s not just one stakeholder group that cares about them.

Q: Which species do you work on?

A: The work we’re doing has focused on three species: Pacific herring, which lay their eggs just offshore, and then sand lance and surf smelt, which spawn in the intertidal zone. All three are strained by the incremental, combined effects of building a dock, installing a bulk head, or armoring the shoreline. The impacts are small at each site, but cumulatively, they can become very large. Taken together, they change the way the shoreline habitat works.

Q: Conserving forage fish habitat in many cases depends on choices made by landowners. How do you go about encouraging them to adopt more natural landscaping?

A: A beach in the San Juans should have lots of vegetation—some hanging out over the sand—and plenty of driftwood. You could almost say that it’s messy, or at least not at right angles and with grass going up to the edge like the landscaping we see in magazines. There are plenty of people whom we’re not going to convince to take this approach, but there are also many who just don’t have the information they need to do something that’s both natural and maybe more cost-effective, too. We’re lucky in the San Juans because we still have a lot of intact habitat and can focus on protection.

Q: Your organization is active in local livability issues such as beach restoration and protection, clean water, safe shipping, and oil spill prevention. With all that, what prompted Friends of the San Juans to get involved in encouraging the Pacific Fishery Management Council to enact a precautionary approach regarding fishing of forage species along the West Coast?

A: We could advocate just in the San Juans, but so many of the issues we work on are much larger than that. It’s nice to come out of the local trenches and look at the broader geographical picture. You get the sense that you’re not alone—there’s a bigger constituency that cares about ocean health. For our board and staff, our participation in the regional planning process was a nice way for us to feel that we’re part of the wider environmental movement.