Our friend M. Mindy Moretti at electionline.org recently asked, “What if you throw an election and no one shows up?”

Story after story about primary elections this year—including in California, Indiana, Nevada, and North Dakota—has noted that voter turnout is near its lowest level in decades. Although this raises interesting, big-picture questions about why participation is so low and what this means for our democracy, election administrators and observers see an additional question: How should we measure voter turnout?

This question is not a new one, but given the evidence from this election season it is a good one to revisit. There is broad agreement that the numerator of the turnout equation should be the total number of ballots cast, but there are several options for the denominator: 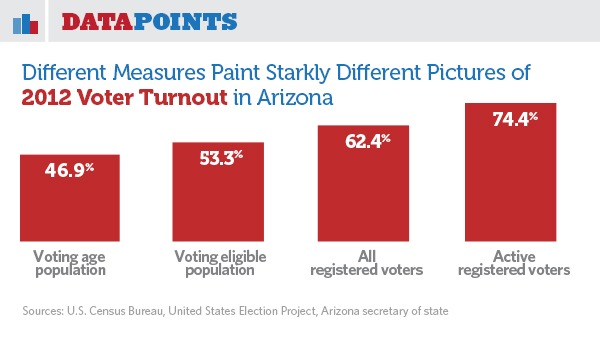 The downside of this approach is that it renders cross-state comparisons impossible. Unlike the VEP, the denominator is based on data that are constructed differently in each state, because states update their voter lists in their own ways and on their own schedules. Further, some election officials advocate for measuring turnout using only active registered voters, because this eliminates individuals who do not regularly participate in elections and who may have moved out of the jurisdiction where they are registered.

To better understand the wide variation that results from using different denominators, consider Arizona during the 2012 presidential election. The state’s turnout figures range from about 47 percent when measuring the voting age population, to 74 percent when looking at the narrower measure of active registered residents.

In the coming months, especially after the general election in November, turnout will undoubtedly be discussed further. Before drawing any conclusions on what these figures mean, it’s important to ask, “Just how is turnout measured?”