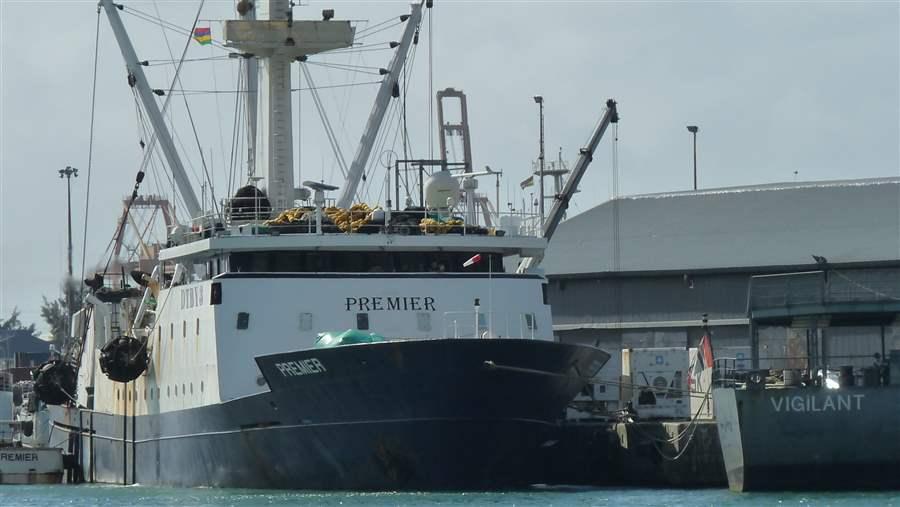 The South Korean purse seiner Premier at dock in southeast Africa in 2013, amid a dispute over the legality of its tuna fishing activity and licensing. The vessel’s owner paid a $2 million fine to settle those charges of illegal fishing.

The European Commission on July 23 extended by six months the deadline for Curaçao, Ghana, and South Korea to improve efforts to stop illegal fishing by their vessels.

In November 2013 the Commission issued warnings, known as yellow cards, to the three nations. Each country initially had one year to clean up its act or face sanctions, including a ban on importing seafood to the European Union. The new deadline gives the countries until May 2015 to show they are taking steps to sufficiently combat illegal, unreported, and unregulated, or IUU, fishing.

Pew has long advocated for major seafood consuming markets, such as the EU, to demand only legally caught seafood from importing countries.

“We would have preferred that the commission stick to its one-year deadline for countries to show improvement in the fight against IUU fishing,” said Tony Long, who directs Pew’s work to end illegal fishing. “But we trust that the commission has solid evidence that these countries are trying, and can make real gains with the added time. The ultimate proof will be in how well the warned nations’ vessels comply with IUU regulations going forward.”

Pew is part of a coalition that has been pushing for stronger EU action in the global fight to end pirate fishing. Other members are Environmental Justice Foundation, Oceana, and WWF.

IUU fishing depletes fish stocks, damages marine ecosystems, puts legitimate fishers at an unfair disadvantage and jeopardises the livelihoods of some of the world’s most vulnerable communities. Illegal and unreported fishing account for $10 billion to $23.5 billion of wild-caught marine fish annually, representing 11 to 26 million tonnes of catch.

The European Commission’s actions, which follow the EU Council’s IUU Regulation (Council Regulation (EC) No 1005/2008), are aimed at deterring pirate fishing by denying non-cooperating countries access to the world’s most valuable seafood market. Under the legislation, which was introduced in 2010, countries that fail to show a commitment to stopping IUU fishing may have their fish seized in European ports and face sanctions or other political consequences to encourage better protection of marine resources.

The EU has issued yellow cards to 13 countries since 2012. Earlier this year, the Commission issued ‘red cards’ to Belize, Cambodia, and Guinea because they failed to improve their IUU stewardship and enforcement after receiving yellow cards in 2012. Those nations are no longer permitted to export seafood to the EU, and EU vessels are not allowed to fish in their waters. Other countries that are currently working to avoid sanctions include Fiji, Panama, Papua New Guinea, the Philippines, Sri Lanka, Togo, and Vanuatu.